Are Reddit Digital Collectibles and Polygon Reviving the Bull Market?

In October, there were 1.11 million monthly unique NFT traders, up 18% from September's figure of 950,000, according to a DappRadar report

Despite a decline in trade volumes, "strong demand" for NFTs is evident in the contentious global crypto market. NFT prices dropped, trade volumes plummeted to $662 million over the crypto winter, while sales fell by 30% to 6.13 million.

Research detailed in a DappRadar report reveals that there were 1.11 million monthly unique NFT traders in October, an increase of 18% from the roughly 950,000 traders in September. NFT trading volumes and sales count both drastically decreased at the same time. 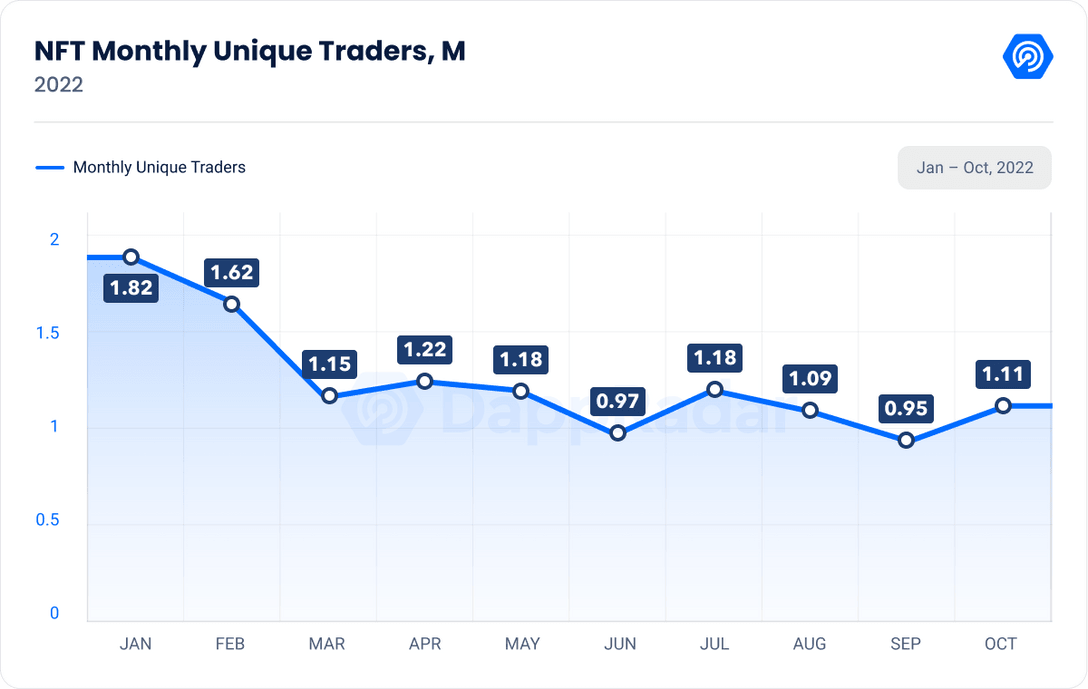 But the rise of unique traders suggests that more people are entering the NFT sector. The average number of different active wallets increasing by 6.84% from the previous month attests to this reality. In essence, cheaper service rates provided by various platforms may entice these new consumers.

Another factor is that at least two other NFT markets, namely LooksRare on Ethereum and Magic Eden in Solana, have switched to an optional royalty system. The optional royalties model allows customers to choose the number of royalties they want to give to an NFT project.

On the positive side, the study also noted that Dogecoin had been the best-performing token of the month, concluding the month 50% stronger than when it began and attributing the reason to Elon Musk's purchase of Twitter and the disclosure of Dogechain's plan.

According to DappRadar, the popularity of the Reddit NFT collections has been the primary factor driving the increase in Polygon's NFT trading activity over the past month. Because every transaction on the Ethereum network is frequently subject to high gas prices, the Polygon network could be an alternative for Ethereum network users.

Polygon's main goal is to enable the multichain Ethereum ecosystem. It offers a network that enables the communication between Ethereum's old and new infrastructure models. It provides excellent functionality and the quickest transaction speed—nearly 65,000 transactions per second. This is one of the main factors influencing people's preference for Polygon today over Ethereum and Bitcoin Blockchains.

With Meta stating on November 2 that Polygon will be its inaugural partner for its new NFT tools, the trade volume for Polygon will probably continue to rise over the following month. Learn more about Polygon here.

Ethereum's NFT trading volume has been declining for the second consecutive quarter, plummeting 21% in the past month to $324 million, the lowest amount recorded by DappRadar since June 2021. Since the Federal Reserve stated its plan to implement a series of aggressive interest rate rises to battle inflation, Ether prices have been down this year. Consumers are discouraged from investing in riskier assets, such as cryptocurrency, by high-interest rates.

A rise in the average number of distinct active wallets, up 6.84% from the previous month, was also noted in this study by DappRadar.

According to DappRadar, one of the biggest Merge staking providers, Lido Finance, has launched on the layer-2 networks Optimism and Arbitrum, which the company believes makes Ethereum staking more accessible while cutting the cost of gas. The Near Foundation and Google Cloud cooperation was also noted in the study as one of the factors contributing to this growth.