Bets on a Bitcoin rally and BTC price action designating the present range as its macro bottom are increasing.

Bitcoin (BTC) reached $17,000 for the first time in 2023, surging alongside stocks and bonds in hopes that the United States Federal Reserve may moderate the pace of monetary tightening.

Bitcoin's gain took a little longer to get going on Friday and hasn't been as dramatic, but the cryptocurrency did manage to reach $17,000 for the first time in three weeks. Along with the numerous difficulties confronting Bitcoin and the broader cryptocurrency business, perhaps the most significant headwind to prices has been the aggressive Fed. To the degree that the Fed slows its rate of tightening, the upward trend for crypto could continue.

It was another mixed day for the crypto market as the bulk of tokens range traded within 3% of yesterday’s pricing since there were no major announcements to generate a rise in volatility.

The stock market witnessed its first big bounce of 2023 to conclude the week higher on Friday after the employment statistics from December showed a decrease in pay growth, which investors viewed as a sign that Federal Reserve policymakers would ease their rate-hiking campaign. This event also led to the downfall of many crypto prices.

According to TradingView data, a bearish onslaught in the early morning pushed Bitcoin (BTC) to a daily low of $16,650 before bullish reinforcements came to push it to a daily high of $17,031. Since then, the price has consolidated near the $16,900 support level.

Eight Global founder Michal van de Poppe also highlighted the return of Bitcoin support and stated that he would consider a long position if Bitcoin went closer to $17,000.

Following the afternoon climb above $17,000, Poppe issued another tweet saying “done deal” and stated that he expected the price to move higher in the following weeks.

Trader of cryptocurrency options Kaleo likewise predicts a positive future for Bitcoin, tweeting that it "Finally appears like BTC is about to break out of the $16K - $17K base zone it's been stuck in the previous several weeks. Begin the squeeze."

Finally, market researcher Rekt Capital supplied the following information, emphasizing the usual amount of time it takes for Bitcoin's price to reach its bottom after a market top.

The phoney breakout and bearish scenario appear more likely on the 4-hour chart, as the price has yet to break over the $17K barrier area to continue the formed positive momentum.

An abrupt rejection of the current price level would almost certainly result in a decline below the $15,500 support level, which would be the bulls' last resort.

Overall, things are heating up from a technical standpoint, as BTC's behaviour around the $17K mark in the coming days will most likely determine the crypto market's mid-term trend. 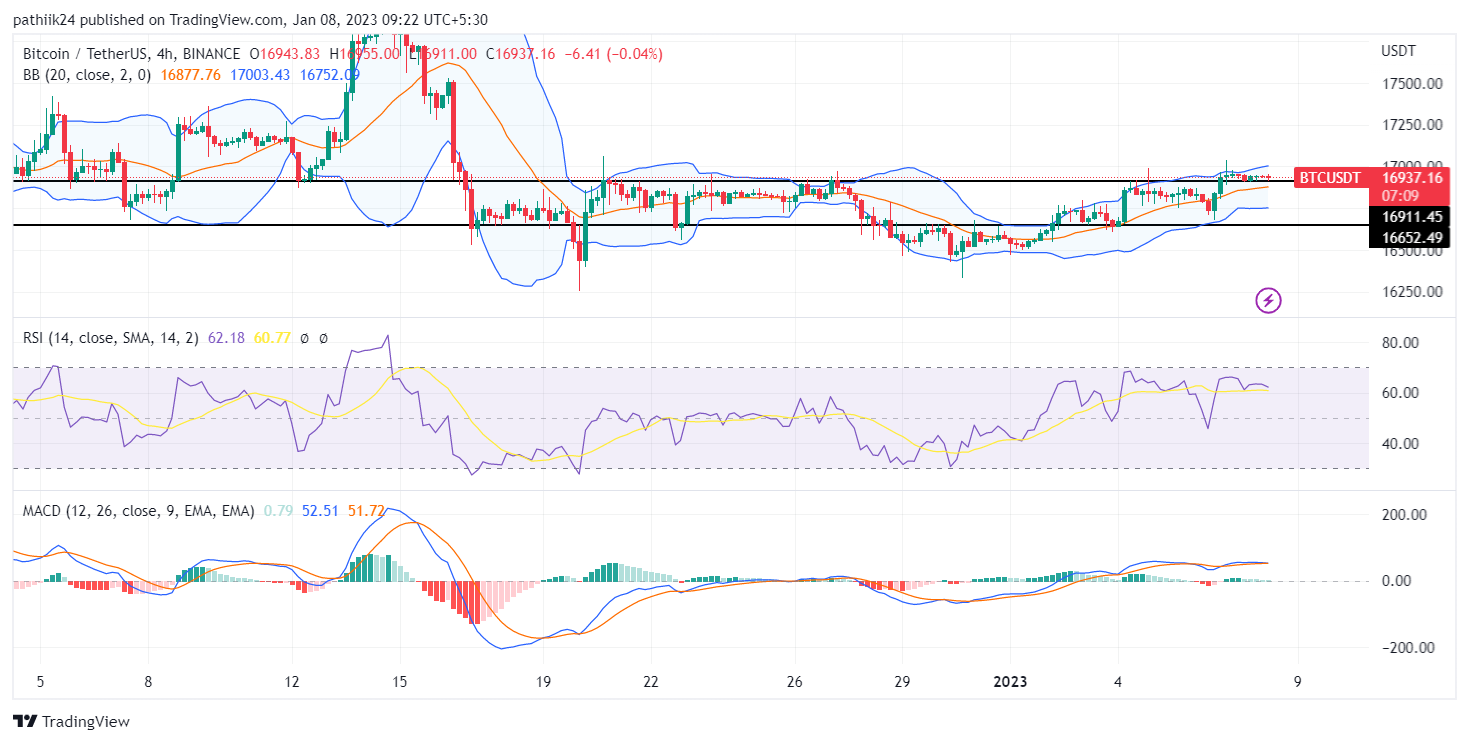 On the daily timescale, the price has finally closed above the 50-day moving average to the upside, after failing to do so several times in the previous weeks.

This breakout appears to have prepared the door for a rally toward the $18K resistance level, and possibly higher. A break above the wedge formation, which is considered a reversal pattern in a bear market, would most likely result in bullish price movement in the medium term.

However, if the price falls back below the 50-day moving average, the likelihood of a plunge toward the $15K support zone increases. 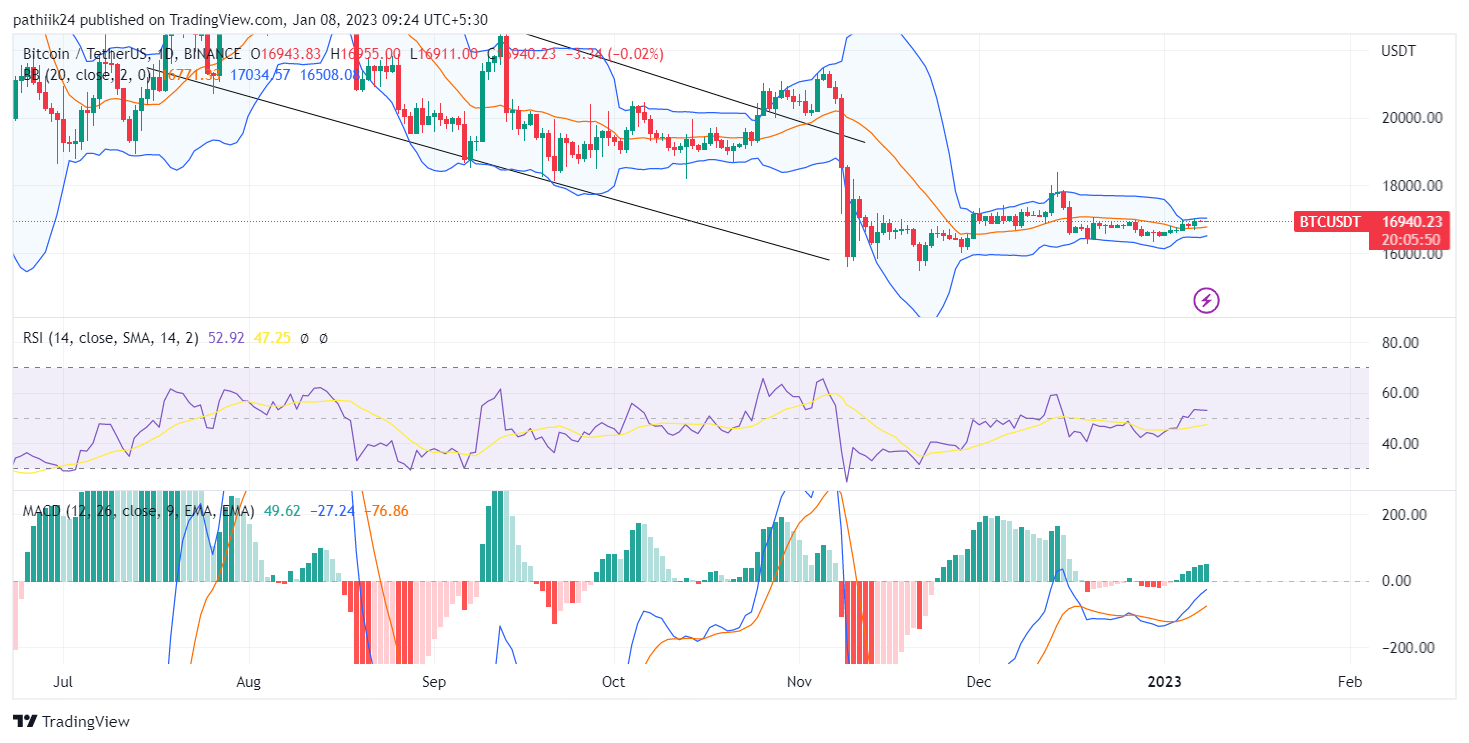 The chart below includes the Realized Price metric, which is one of the most useful indicators for determining whether Bitcoin is under or overvalued. During positive market cycles, the price typically remains above the realized price. In contrast, during a bear market's last capitulation phase, the price falls below the realized price, causing tremendous dread and uncertainty.

Based on historical cycles, the start of a bull market is expected once the market price exceeds the realized price. This has not yet occurred, as the cryptocurrency has failed to break above the realized price, resulting in a brief drop.

As a result, any positive price action is doubtful unless Bitcoin exceeds the realized price ($19.7K). 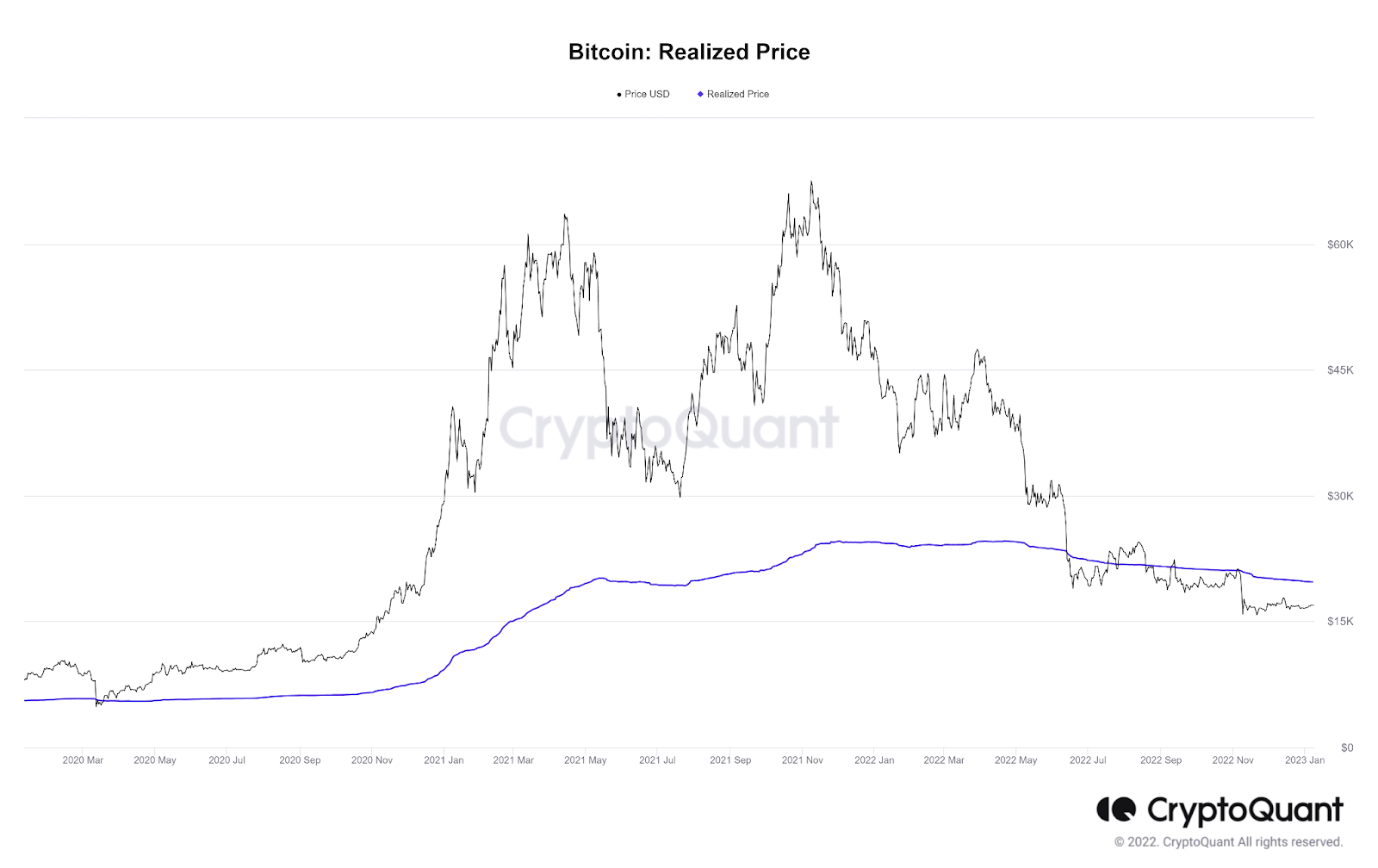