Bitcoin plummeted below $17,000 on December 17, as bearish pressure mounted in the aftermath of yesterday's poor U.S. retail sales numbers.

Bitcoin plummeted almost 6% in two days as Binance FUD circles around the crypto market. Concerns about Binance, the largest global exchange, dominated the air, despite CEO Changpeng Zhao's best attempts to dispel what he dubbed "FUD." Longtime crypto traders were also wary of the legitimacy of the "craziest tales" regarding the crypto exchange business.

On the same day, Binance's proof of reserves report was removed by auditor Mazars Group, which also said that it would no longer deal with crypto sector customers.

Meanwhile, in a Twitter debate, Zhang openly mocked a statement by outspoken television celebrity Jim Cramer, who stated that he "would trust my money more in Draftkings than I would Binance."

The gains Bitcoin and other crypto made during the Federal Meet this week have all gone. Ethereum (ETH) plunged more on Friday, approaching the $1,200 level. ETH recorded a low of $1,210.35 earlier in the day, after reaching a high of $1,291.32 on Thursday.

With today's loss, Ethereum has fallen for the third straight session, breaking through a critical barrier of $1,230.

ALSO READ: How Bitcoin and Inflation are related?

The chart has previously formed a rising channel pattern for short-term traders. The support was broken earlier than predicted on December 16th. The price is settling somewhere between $16,865 and $16,527.

The RSI on the 4-hour chart reveals that BTC broke through the index's 30 levels and entered the oversold territory. The 30 RSI was broken on December 16 but regained on December 17. This means that short-term traders will see a price increase shortly. 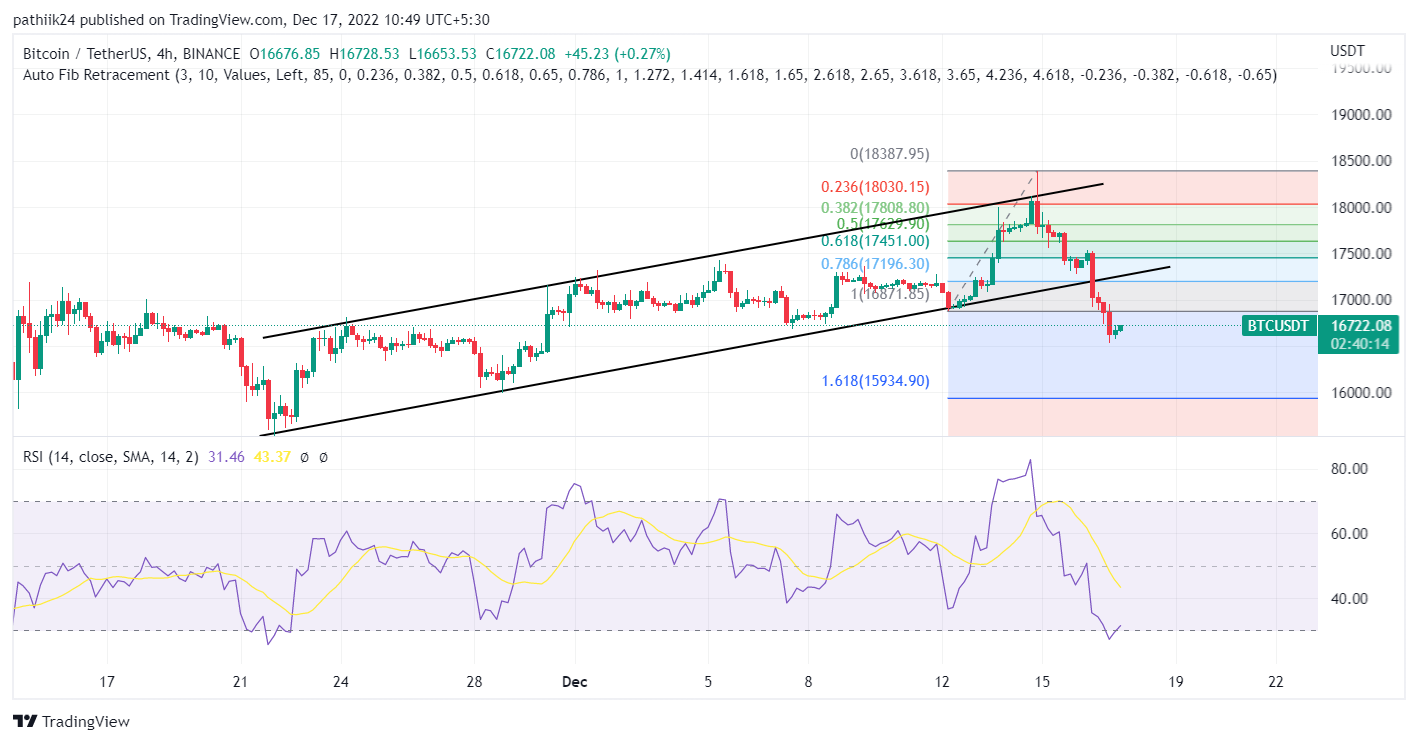 Bitcoin (BTC) dipped below $17,000 in today's session as markets continued to react to retail sales data from last month. As retail sales in the United States fell short of expectations, BTC/USD fell to an intraday low of $16,997.54 earlier in the day.

According to the chart, negative pressure increased after a breakdown of a floor at $17,200, with the price currently trading at $16,708.

This little reversal occurs when the 14-day relative strength index (RSI) approaches a support level of 45.00.

The index is presently tracking at 43.00, and price strength has already reached the aforementioned floor, with BTC breaking through the $16,800 support. 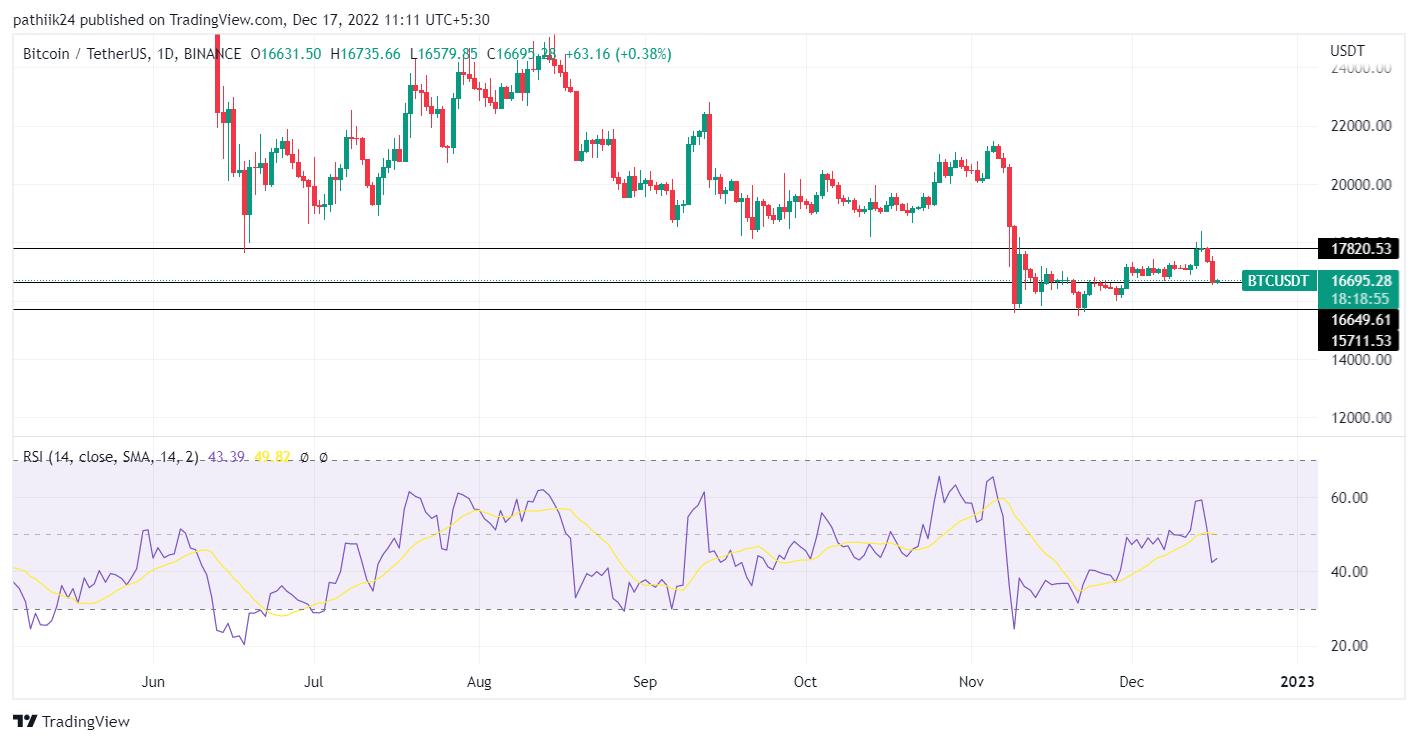 The Bitcoin fear and greed index is at 28 which shows the market sentiment is in fear. The fear comes as Bitcoin fell after the FED meeting as short-term investors came into the market made a profit and exited the next day. 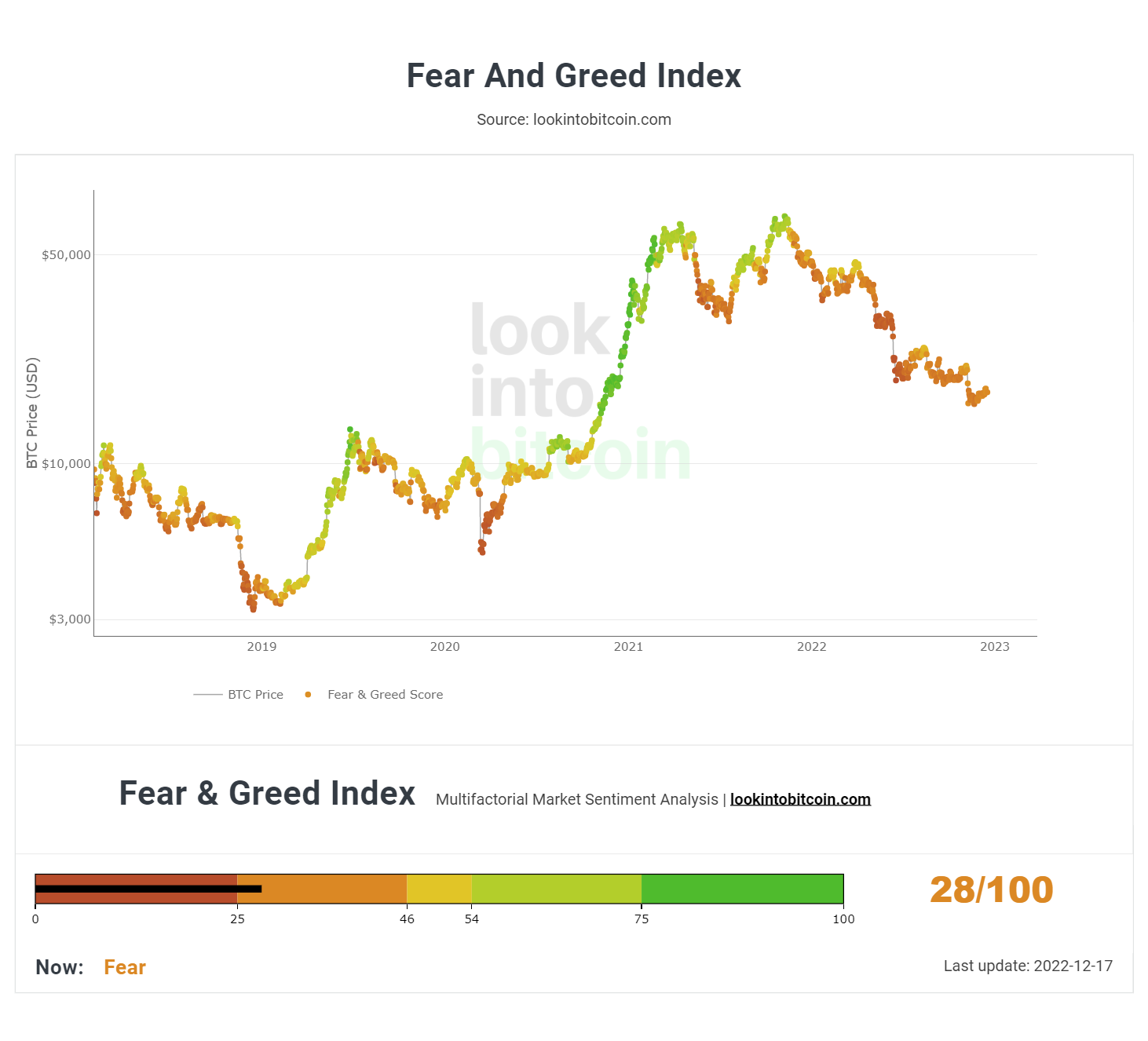 Liquidation of $33 Mn Worth of Bitcoin Post CPI Gains

Bitcoin and Ethereum have just given up all of their recent gains following this week's upbeat CPI news.

More than $117 million in levered positions have been blown out throughout the whole market, with Bitcoin and Ethereum accounting for the majority of those holdings.

ETH has seen around $45 million in liquidations in the last 24 hours, while BTC has had over $33 million. According to Coinglass liquidation statistics, the next greatest liquidations were Dogecoin ($3.3 million) and Litecoin ($3 million).

Over the last 12 hours, more than 92% of all liquidations were blown out of long positions.

Q1) How does Bitcoin make money?

Ans: Miners on the Bitcoin network make money by validating blocks and being reimbursed for their efforts. Bitcoins may be traded for fiat money and used to make purchases from merchants and retailers who accept them via cryptocurrency exchanges.

Q2) Can BTC addresses be hacked?

Ans: Cryptocurrency is a decentralized digital money that secures transactions and ownership information via encryption. Transactions involving cryptocurrency are recorded on a digital database known as a blockchain. The fundamentals behind blockchain technology make hacking into a blockchain almost difficult.

Q4) How long will it take to mine 1 Bitcoin?

Ans: It takes about 10 minutes to mine one Bitcoin, however, this is with perfect hardware and software, which isn't always cheap and only a few individuals have it. Most users can mine a Bitcoin in 30 days, which is more usual and reasonable.

Q5) Can I mine Bitcoin on my phone?

Ans: Solo or pool mining services are available for crypto mobile mining on iOS and Android platforms. However, Bitcoin can’t be mined using mobile phones as it is a very heavy process and requires heavy equipment.