Top cryptocurrencies have given up early gains as the Federal Reserve signalled that interest rates will continue to rise long beyond 2023.

Federal Reserve Chair Jerome Powell said that the central bank would raise the benchmark interest rate by another 50 basis points on Wednesday, a move that is well expected. The revelation elicited a "sell the news" reaction in the cryptocurrency market, with values mostly trending downward after the decision was published.

Traditional markets reacted similarly, with the key indexes falling into the red after being in the green previous to Powell's remarks. The S&P 500, Dow, and Nasdaq all closed in the red, down 0.61%, 0.42%, and 0.76%, respectively.

On Wednesday, the largest cryptocurrency Bitcoin saw a tremendous surge, reaching its highest level in a month as a result of considerable cooling in US inflation figures. Crypto markets are generally on a tear, with attention now moving to the FOMC policy meeting. Bitcoin, the dominant cryptocurrency, has edged closer to the $18,000 level, with weekly performance rising further.

According to TradingView data, Bitcoin's (BTC) price jumped to an intraday high of $18,377 before plummeting to a low of $17,663 in a couple of hours before bulls bid it back to support above $17,800.

For short-term traders or intraday trading, the price action is obeying the inclined resistance level between $16,846 to $17,792 and hasn’t breached it yet.

According to the analysis, the price is making two support lines on the 4-hr chart. Support 1, which is supporting the $16,793 dip and $16,918 bottom line on 7 Dec till 12 Dec. However, support 2 (Acted as the resistance for support 1) had broken on 7 Dec. The price action continued to grow till 12 Dec before retracing the support 2.

To retreat again to support 2, an uptrend has been established on 12 Dec before the fed meet can be seen. This uptrend helped Bitcoin to go even above support 2 and break the existing resistance. 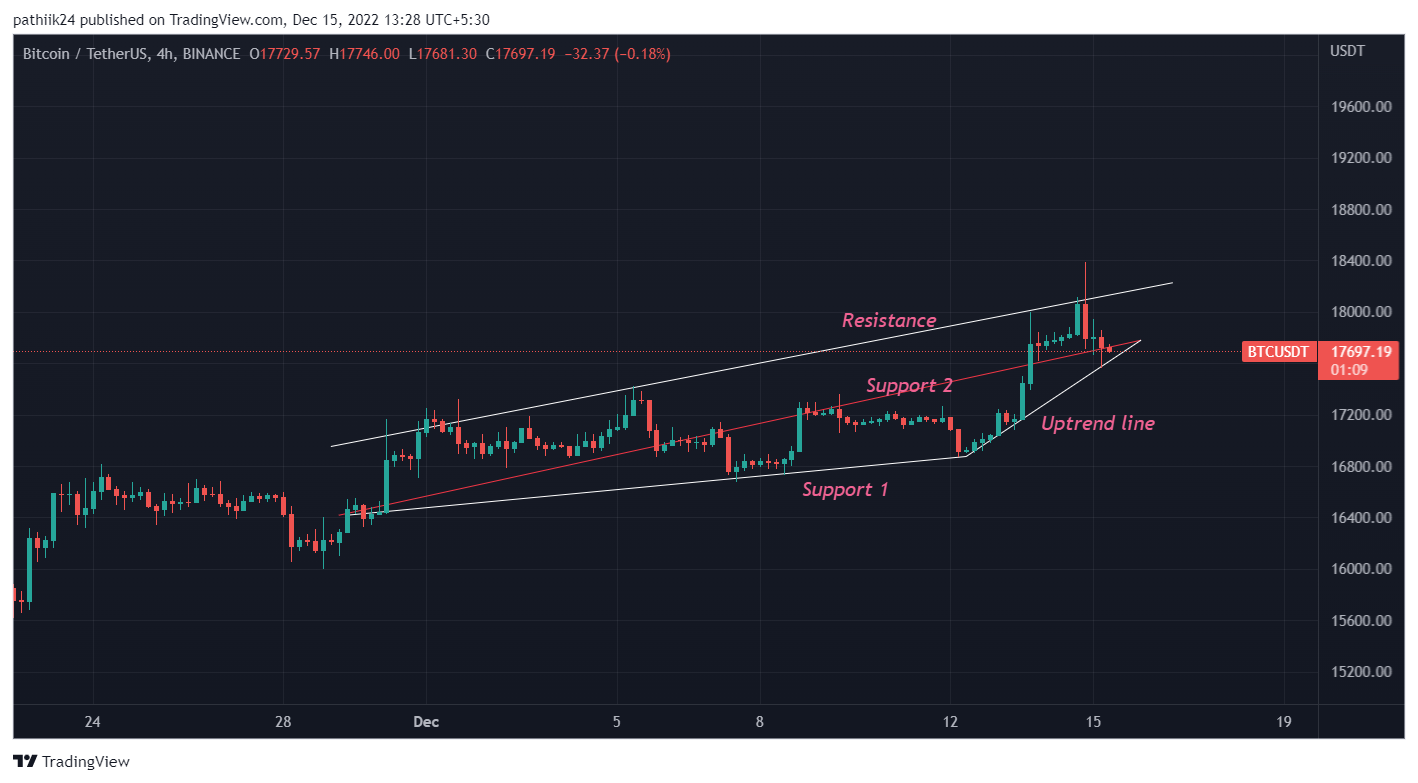 RELATED: How is the Price of Bitcoin Set

Bitcoin is developing slowly in a declining trend channel over the medium run. Falling trends imply that the currency is losing value and that investor interest is waning. The currency is trading between support at 16000 and resistance at 18600.

The new path is predicted by a definite breakthrough of one of these levels. Volume tops and bottoms connect nicely with price tops and bottoms. Volume balance is also positive, which weakens the declining trend and may be an early indicator of a trend break.

The RSI curve is increasing, which is an early indication of a likely price trend reversal upwards. Overall, the currency is seen as technically neutral in the medium term.

The MACD is at 158 for 9 days SMA and showing a strong Bullish trend. The upsurging green bars show how strong BTC has been traded in the past few days. 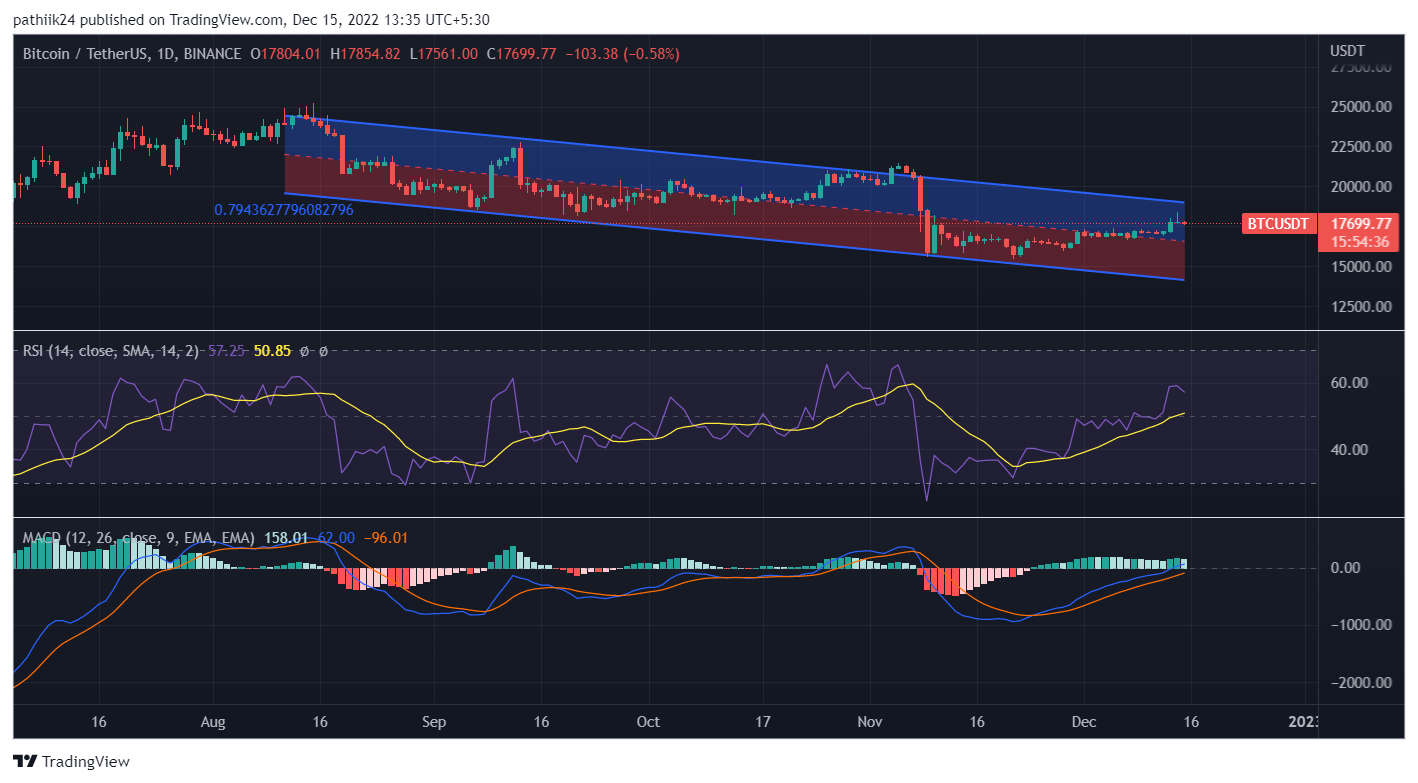 Twitter is always a place where people show their tremendous analytical skills. Bitcoin is always trending topping the Hashtag reach on Twitter. MMcrypto, a self-claimed Bitcoin enthusiast has driven the attention of crypto fans on to his new tweet.

He posted a graphical illustration of how bitcoin surged after the 2018 crypto winter at the end of the year. The same chart is imitated by the 2022 price.

Whereas commenting on the same, A FX trader with the Twitter handle name, DiamondFX claimed the analysis false as in long term, the chart is making a falling channel pattern.

However, with a surge in price, Bitcoin’s on-chain data tells a lot of stories than just patterns and price actions. Data from the analytics firm Chainalysis shows that the Bitcoin exchange inflows have taken a steady up growth after going down on Dec 10. The current BTC exchange inflows are marked at $1.3 Bn inflows on a 30-Day chart. 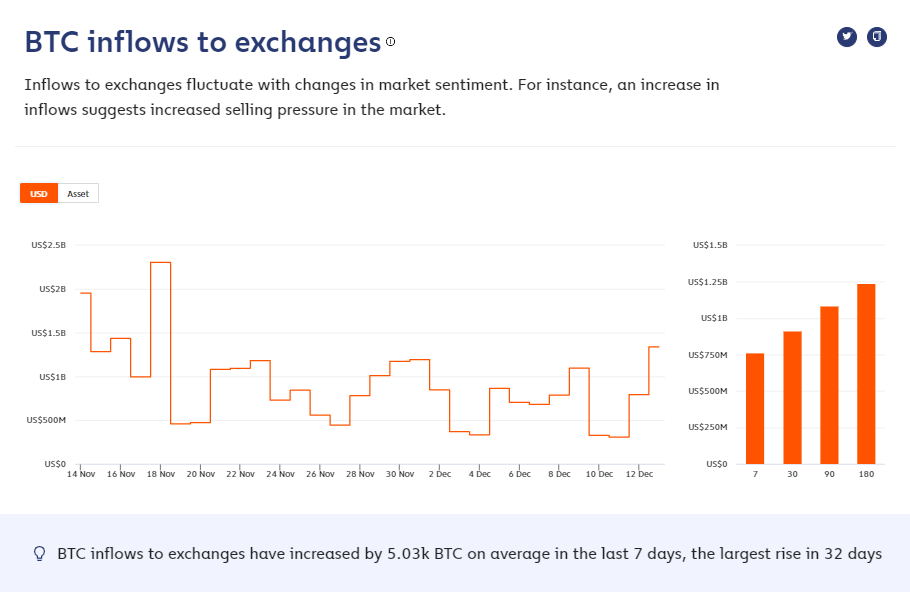 Bitcoin Fell After US Regulation Heats Up

Concerns about the use of cryptocurrency to aid money laundering and terrorist funding are routinely expressed by politicians or regulators, and they are commonly used to underscore the necessity for more stringent regulation of the digital asset market.

Bitcoin lost some of its early gains and was recently trading around $17,800 after the Federal Reserve of the United States hiked interest rates by another 50 basis points at its final meeting of the year and suggested that additional hikes were anticipated in 2023. BTC was trading at $18,356 just before the Fed statement, breaking beyond the $18,000 barrier for the first time since early November.

The Federal Reserve of the United States hiked interest rates by 50 basis points (0.5 percentage points) on Wednesday, continuing to restrain mild price growth. Amberdata's Derivatives Director Greg Magadini discusses his thoughts on bitcoin (BTC) in light of the current decision by the Federal Reserve. In addition, Jennifer J. Schulp of the Cato Institute gives her viewpoint as a witness at the Senate Banking Committee Hearing on FTX's collapse.

Q1) How does Bitcoin make money?

Ans: Miners on the Bitcoin network make money by validating blocks and being reimbursed for their efforts. Bitcoins may be traded for fiat money and used to make purchases from merchants and retailers who accept them via cryptocurrency exchanges.

Q2) How long will it take to mine 1 Bitcoin?

Ans: It takes about 10 minutes to mine one Bitcoin, however, this is with perfect hardware and software, which isn't always cheap and only a few individuals have it. Most users can mine a Bitcoin in 30 days, which is more usual and reasonable.

Q3) Can I mine Bitcoin on my phone?

Ans: Solo or pool mining services are available for crypto mobile mining on iOS and Android platforms. However, Bitcoin can’t be mined using mobile phones as it is a very heavy process and requires heavy equipment.

Q4) Can BTC addresses be hacked?

Ans: Cryptocurrency is a decentralized digital money that secures transactions and ownership information via encryption. Transactions involving cryptocurrency are recorded on a digital database known as a blockchain. The fundamentals behind blockchain technology make hacking into a blockchain almost difficult.