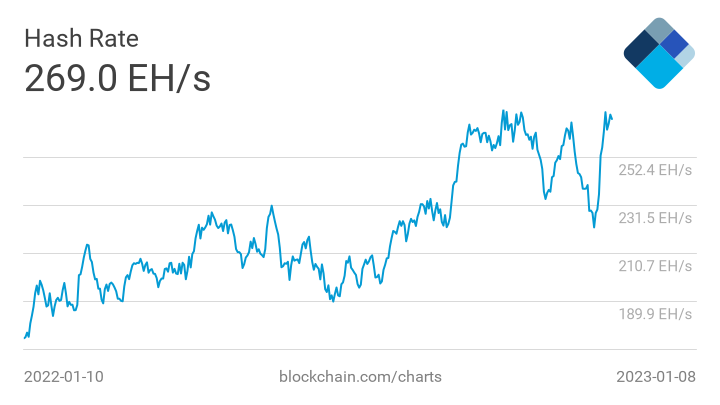 Since BTC's Christmas hash rate decreased, the network has added 50th/s. During the holiday season, the hash rate fell by roughly 40% due to terrible weather conditions that compelled big miners to cease operations.

Meanwhile, the increase in the BTC hash rate is projected to result in a 7% to 10% increase in mining difficulty.

Also Read: Bitcoin Taproot Upgrade: All you need to know

The hourly Bitcoin price analysis favours the bulls, as the coin value has increased significantly. Green candlesticks indicate a substantial surge in price, which has just crossed the $16,914 barrier. For the previous few hours, market patterns have been fluctuating, but the bulls presently hold the upper hand.

The 50-day moving average has crossed above the 100-day moving average, indicating strong bullish momentum. Buyers have also maintained their hold, and the BTC/USD value is currently stable at over $16,932. The next few hours will be critical for the coin, as any price spike or decline could determine its future direction. 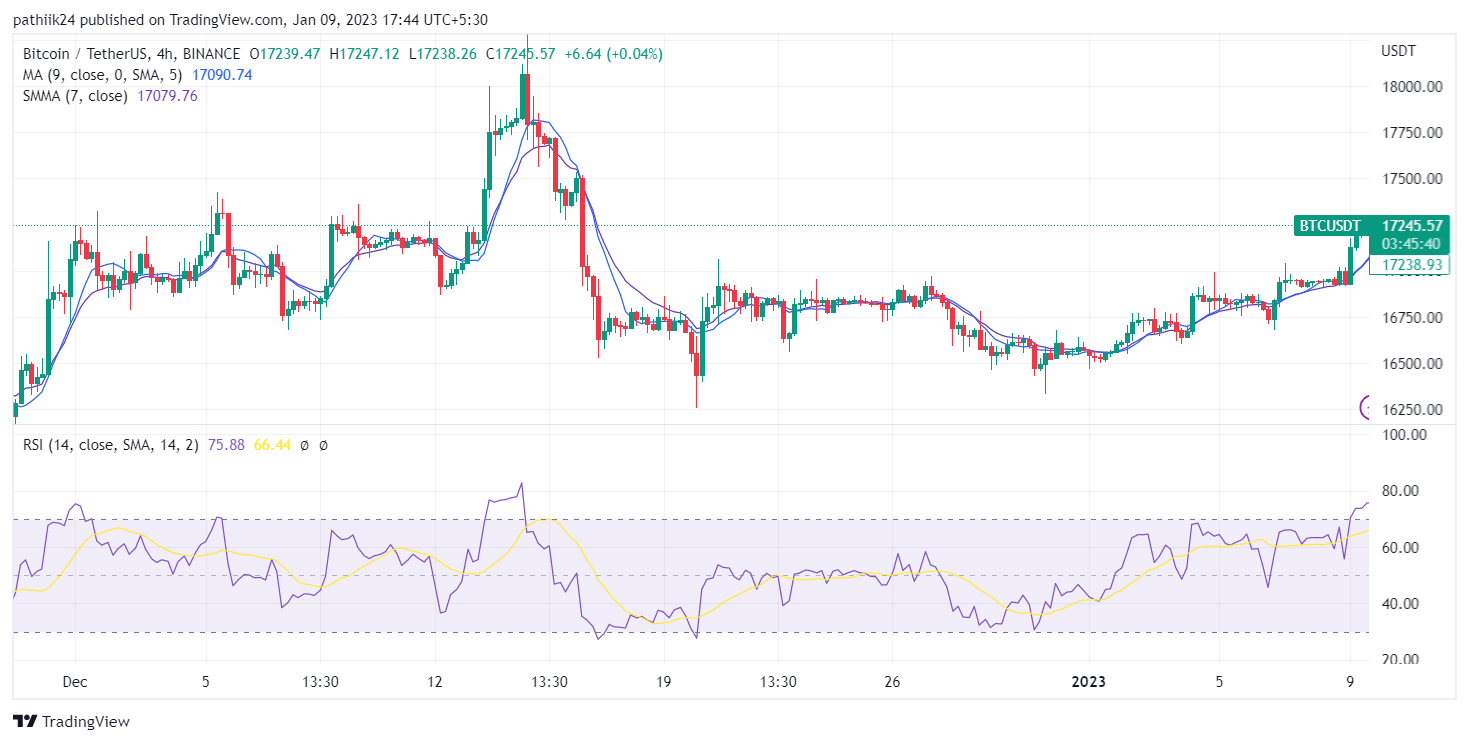 The one-day analysis of the price of Bitcoin reveals a bullish trend for the cryptocurrency as a sizable increase in coin value was noted. Early in the week, the price fell, but now the bullish trend has returned. The price level is back up to $16,932 and the short-term trending line is rising.

Moving averages MA50, which is at $16,801 and MA200, which is at $16,912, show that the market is moving in a bullish direction. There is further opportunity for upward growth as the Relative Strength Index (RSI) is pointing slightly over the 40 mark. 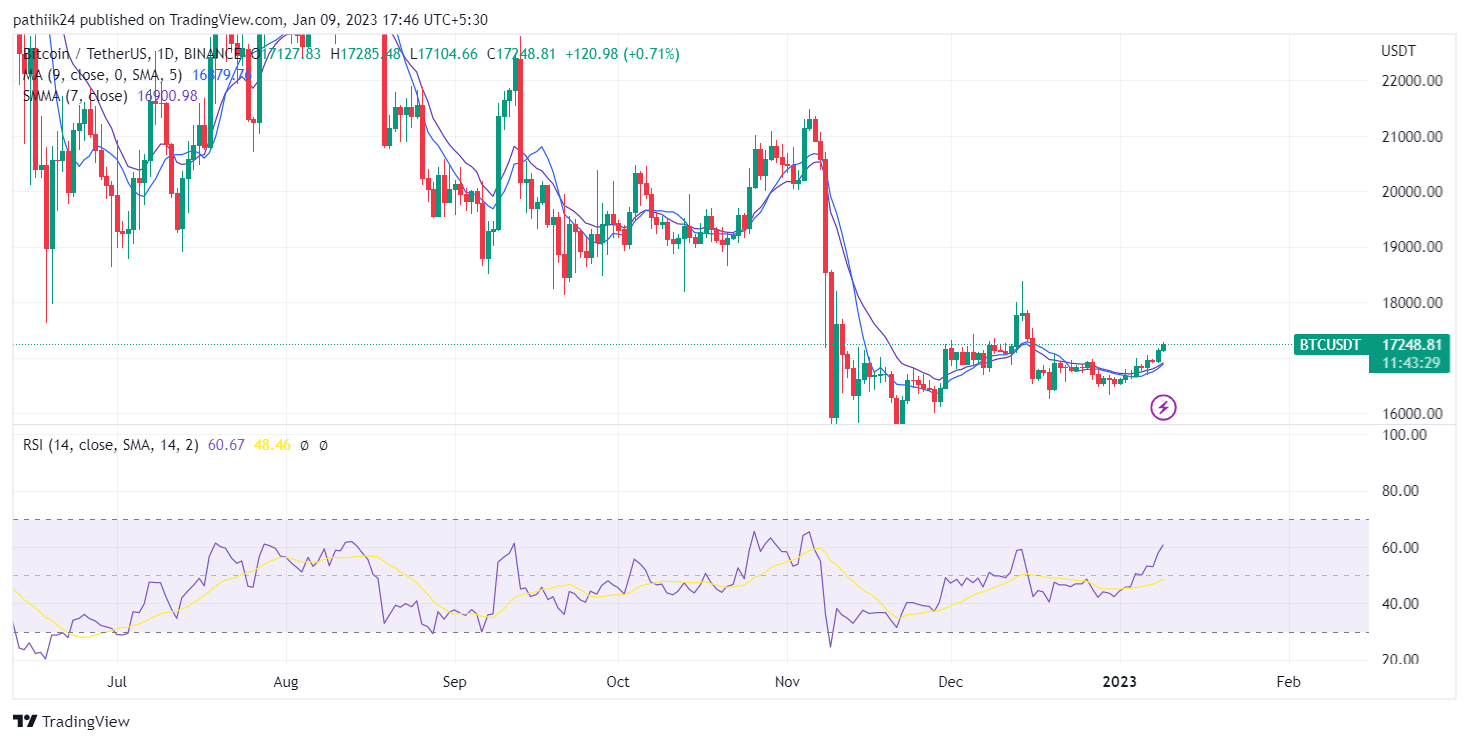 On Sunday, the price of Bitcoin (BTC) decisively surpassed $17,000, breaking out of its recent trading range to reach a three-week high.

Following statistics on U.S. services industries stagnating, which traders in both traditional and digital asset markets saw as a sign that the Federal Reserve may soon be able to let off on its push to tighten financial conditions, the largest cryptocurrency briefly surpassed $17,000 on Friday.

However, it took a few more days for bitcoin to firmly cross a barrier that had effectively stopped any price increases since mid-December.

Although David Duong of Coinbase Institutional said in a study that a successful push beyond the $17,100 threshold might put bitcoin on track toward the next technical level around $17,800, analysts were quick to point out that price charts are still leaning bearishly.

During the coming week, bitcoin traders will be keeping an eye on a crucial report on US inflation that will presumably also be used as a factor by the Federal Reserve. The 64% price decrease of bitcoin last year, the worst yearly performance in four years, was significantly influenced by the central bank's monetary tightening last week.

Traders will continue to keep an eye on the rumours surrounding the future of Genesis, a subsidiary of the crypto conglomerate Digital Currency Group, which also owns CoinDesk. Another topic is the potential for a recovery in Solana's SOL token, one of the largest "Sam currencies" that suffered greatly after Sam Bankman-FTX Fried's exchange's collapse last year.

Who controls the Bitcoin network?

Nobody owns the Bitcoin network, just as no one owns the technology that powers email. Bitcoin is governed by all Bitcoin users worldwide. While developers are working to improve the software, they are unable to impose a change in the Bitcoin protocol because all users are free to use whatever software and version they like. To remain compatible, all users must use software that adheres to the same set of criteria. Bitcoin can only function properly if all users reach a perfect agreement. As a result, both users and developers have a strong motivation to safeguard this agreement.

Is Bitcoin used by people?

Yes. Bitcoin is being used by an increasing number of businesses and individuals. This includes traditional companies such as restaurants, apartments, and law firms, as well as well-known online services such as Namecheap and Overstock.com. While Bitcoin is still a relatively young phenomenon, it is rapidly expanding. As of May 2018, the total value of all existing bitcoins had surpassed $100 billion USD, with millions of dollars worth of bitcoins transferred every day.

What happens when bitcoins are lost?

When a person loses his wallet, it takes money out of circulation. Lost bitcoins, like all other bitcoins, are still recorded in the blockchain. However, lost bitcoins are forever dormant since no one can find the private key(s) that would allow them to be spent again. Because of the law of supply and demand, when there are fewer bitcoins available, those that remain are in more demand and hence grow in value to compensate.