Following its most recent purchases, Microstrategy currently owns around 132,500 bitcoin.

Microstrategy Inc., a Nasdaq-listed company, stated Wednesday that it had bought additional bitcoin for its corporate treasury. The company's founder and executive chairman, Michael Saylor, tweeted on Wednesday:

Microstrategy confirmed in a statement with the Securities and Exchange Commission (SEC) that the 2,500 Bitcoin were obtained by its fully-owned subsidiary Microstrategy between November 1 and December 24.

Microstrategy traded bitcoin for the first time in December, after amassing the cryptocurrency for its corporate treasury in 2020. The corporation stated that it was selling BTC for tax reasons.

According to Saylor, Microstrategy is investing in Bitcoin "for the long run." He continued:

“Our strategy is to buy bitcoin and hold the bitcoin, so there’s no price target … I expect bitcoin is going to go into the millions. So, we’re very patient. We think it’s the future of money.”

This news surrounded the market and hence drove the Bitcoin price into the green zone. Whenever there’s the big news of an institution or big business tycoon buying Bitcoin, the market sentiment automatically manipulates.

Also Read: Bitcoin Taproot Upgrade: All you need to know

Bitcoin's price fell further on Tuesday as the US equities market plunged. What is remarkable here is that every time BTC's value has fallen, Nasdaq has been at the forefront of this slide, followed by the S&P 500 and, finally, the Dow Jones index, indicating a transfer across sectors as traders leave tech for other markets. As the yields on US Treasury bonds grow more appealing, more investors are preferring to invest in either cash or these bonds.

On a Daily chart for long-term investors, the pattern in making is quite confusing as Bitcoin recently fell almost 75% from its all-time high and the candles progressing further isn’t making any perfect pattern. From price action, previously Bitcoin made an Ascending trendline which obeyed the line before the decline later.

Right now, the price is supporting the $16,557 mark which is not much lower to be tested. The resistance is above the $17,000 mark. If the price breaks the resistance in future days, a rally may happen and if breaks the support, the next support it will test will be between 15000-16000.

The relative strength index (RSI) for Bitcoin is also in a bearish zone (at 43), suggesting that bearish momentum could increase if the price drops below $16,000.

Looking at the moving averages to measure the momentum of the price, Bitcoin is expected to face strong resistance at the 100-day simple moving average (SMA) line. The MACD is also making red bars which indicates an upcoming bearish movement. 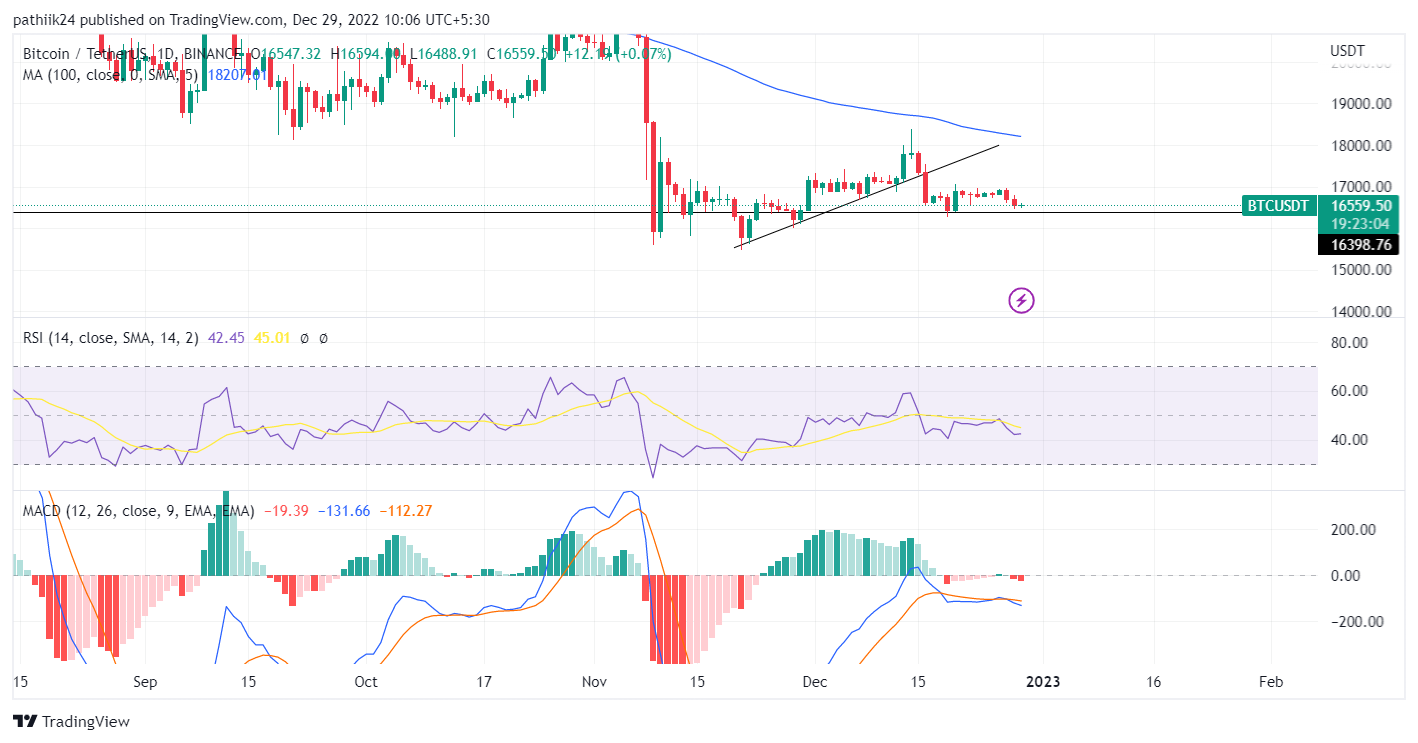 Bitcoin price research on 4-hour and hourly timescales show that the cryptocurrency is still trapped in a bearish flag pattern. If Bitcoin falls below the $16,300 support level, it is likely to continue falling toward $15,900. However, if bulls manage to break over $17,000, a rally might begin shortly.

The technical indications indicate that Bitcoin is presently in a negative zone and that the price will likely continue to fall until it settles around $16,500. The Relative Strength Index (RSI), for instance, is below 40, and the MACD is indicating a bearish divergence.

The Fibonacci retracement level indicates that critical support is near $16,000. If the bulls can hold above this level, a short-term surge is possible. A comeback is possible if the bulls secure support above $16,000 and push BTC above the 50-day SMA line. 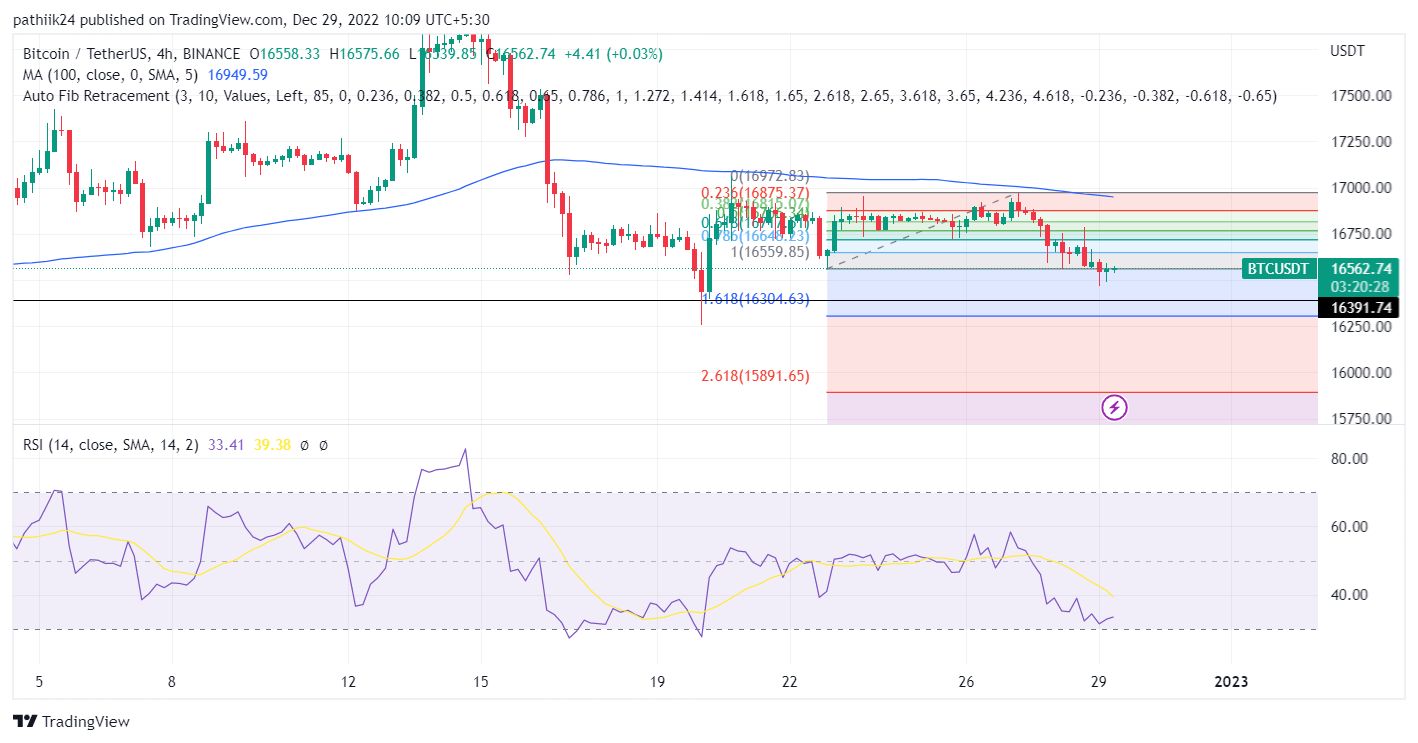 Long-term Bitcoin holders are an important group because their conduct provides great information about future market patterns. The SOPR of long-term investors is a strong indicator that quantifies the profit-to-loss ratio obtained by these market players and is one of the go-to metrics for on-chain research. Values greater than one represent realized gains, whereas values less than one imply losses. 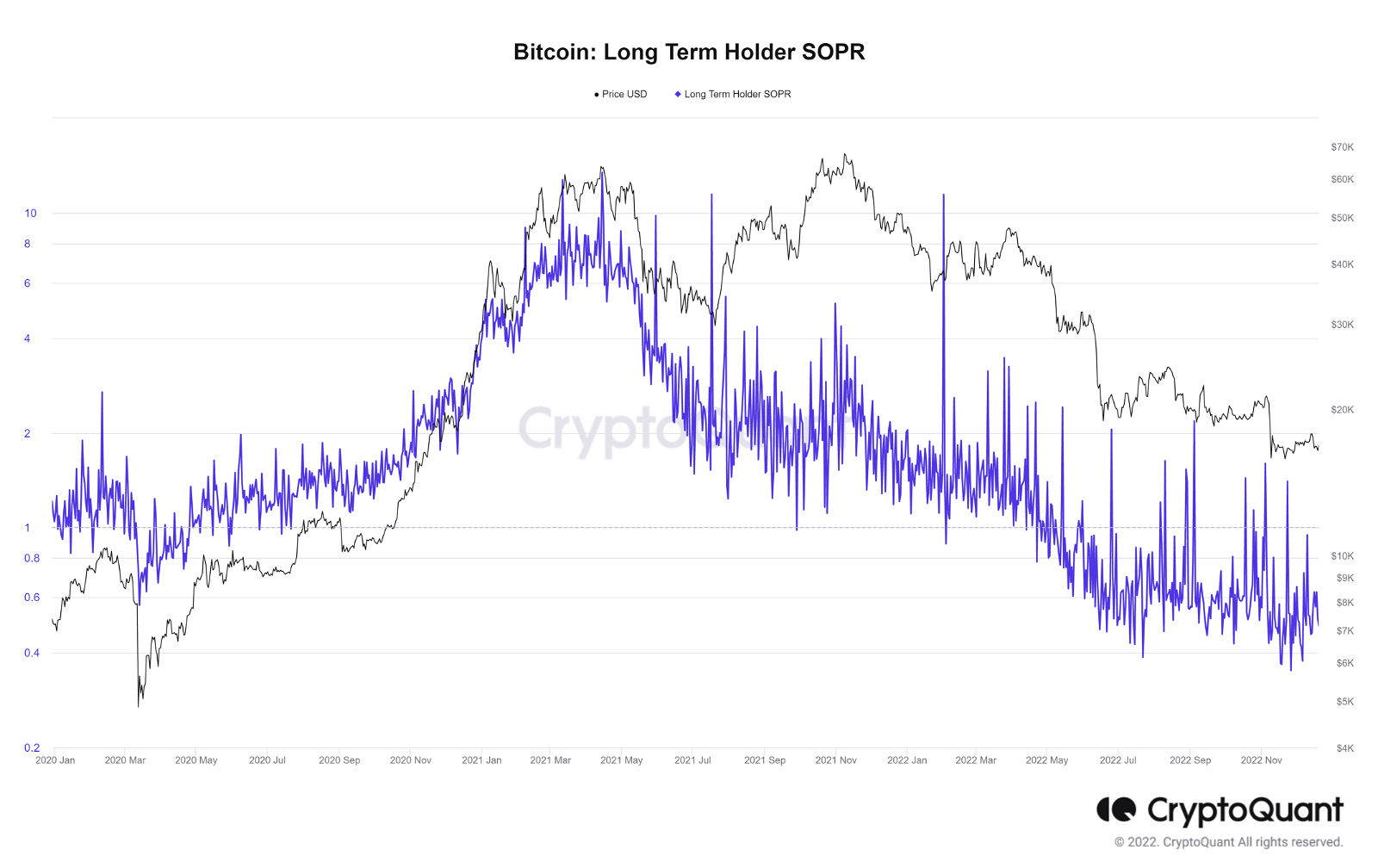