Bitcoin Reclaims the Support, A Bit of Relieve Before Christmas

Bitcoin has risen beyond the $16,800 barrier level. On the hourly chart of the BTC/USD pair, a rising channel is formed with resistance at $17,000.

The bulls were successful in pushing the price over the $16,800 resistance level as well as the 100 hourly simple moving average. The price even broke beyond the $17,000 barrier, but the upside was restricted. A high near $17,067 was achieved, and the price is presently trading in a range.

The Bitcoin highs occurred following the announcement of the encouraging CPI statistics, while the lows occurred in the days following the Federal Open Market Committee meeting, during which Fed Chair Powell gave a hawkish speech foreshadowing additional rate rises. In reaction to these events, Bitcoin has essentially moved in lockstep with US stocks during the last week.

Meanwhile, On Tuesday, global asset prices trended higher as markets recovered from an early bout of weakness caused by the Bank of Japan's decision to raise the ceiling on its 10-year government bond. The central bank's moves heightened already-existing concerns that monetary tightening by central banks would lead to a worldwide recession, although financial markets recovered as the day proceeded.

Also Read: How to Mine Bitcoin?

The price can be seen making an upturn on the 24-hour candlestick chart for Bitcoin price analysis, taking the price up to $16,899. A significant amount of depreciation in the coin's worth has been recorded in recent days, as the price has declined significantly over the previous week. The losses have been significant, but there is now a possibility for recovery.

The daily chart's indicators are all pointing to a bullish trend, with the Relative Strength Index (RSI) rising to 48.87, indicating that the bulls are gaining control of the market. The Moving Average Convergence Divergence (MACD) is also rising above the signal line, indicating a bullish trend.

On the daily chart, BTC forms an ascending triangle, pushing the price beyond the critical 25-day exponential moving average (EMA) of $16,706. 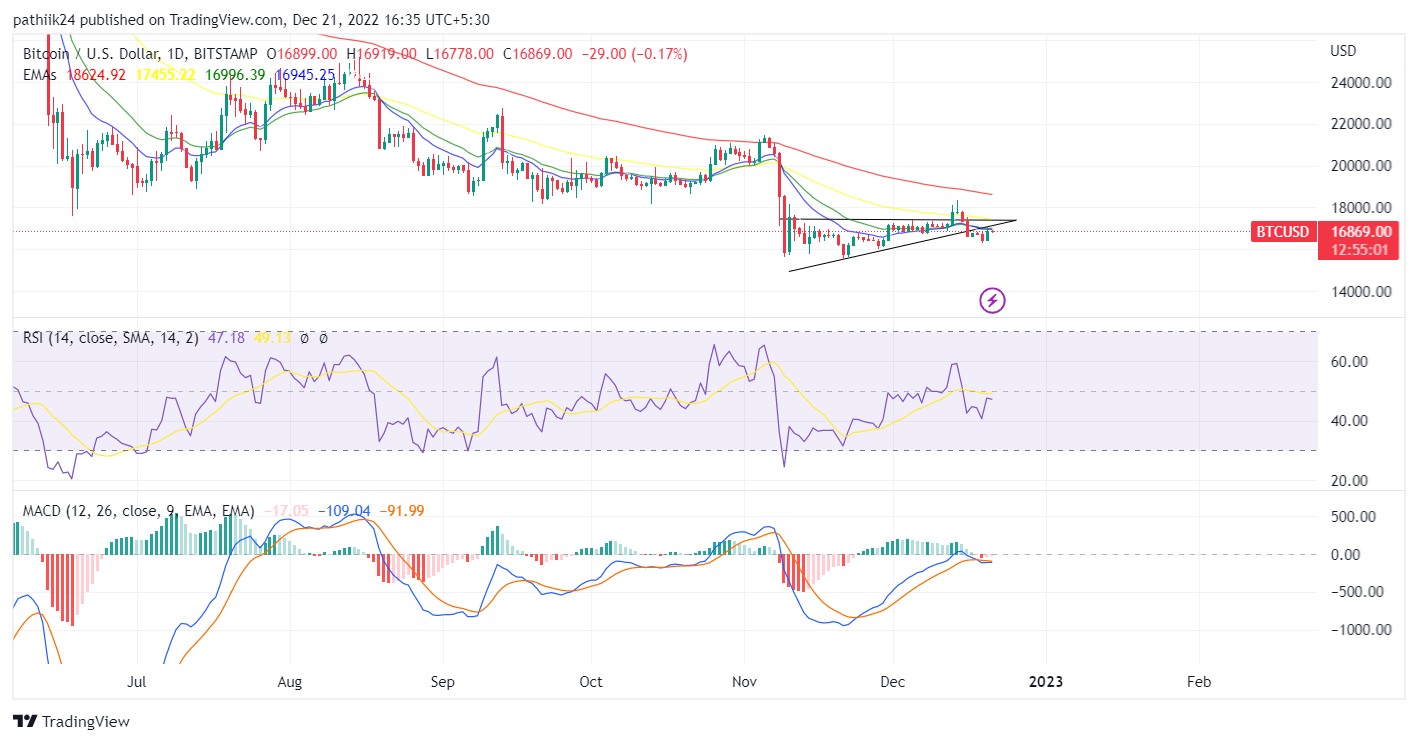 The 4-hour price chart for Bitcoin price analysis illustrates the opposite side of the story, as the rise shown on the 1-day price chart has reversed, with a price decline noted during the previous 24 hours.

The bears made a reappearance at the start of today's trading session and have been continually depreciating the coin's value. After a recent reversal in market patterns, the cryptocurrency has been discounted back to $16,398. However, the balance of power remains in favour of the bulls, since the price remains up.

The RSI on the 4-hour chart is presently at 50 and is trending upward, indicating that the coin's momentum is strong. The MACD line is still above the signal line and rising, indicating that the bulls continue to dominate the market. Despite the retreat, the bulls remain in command, and if Bitcoin price analysis breaks above the 25-EMA at $16,706, we might see the price soar much more. The EMA crossing will be a big sign that the upswing is still going strong. 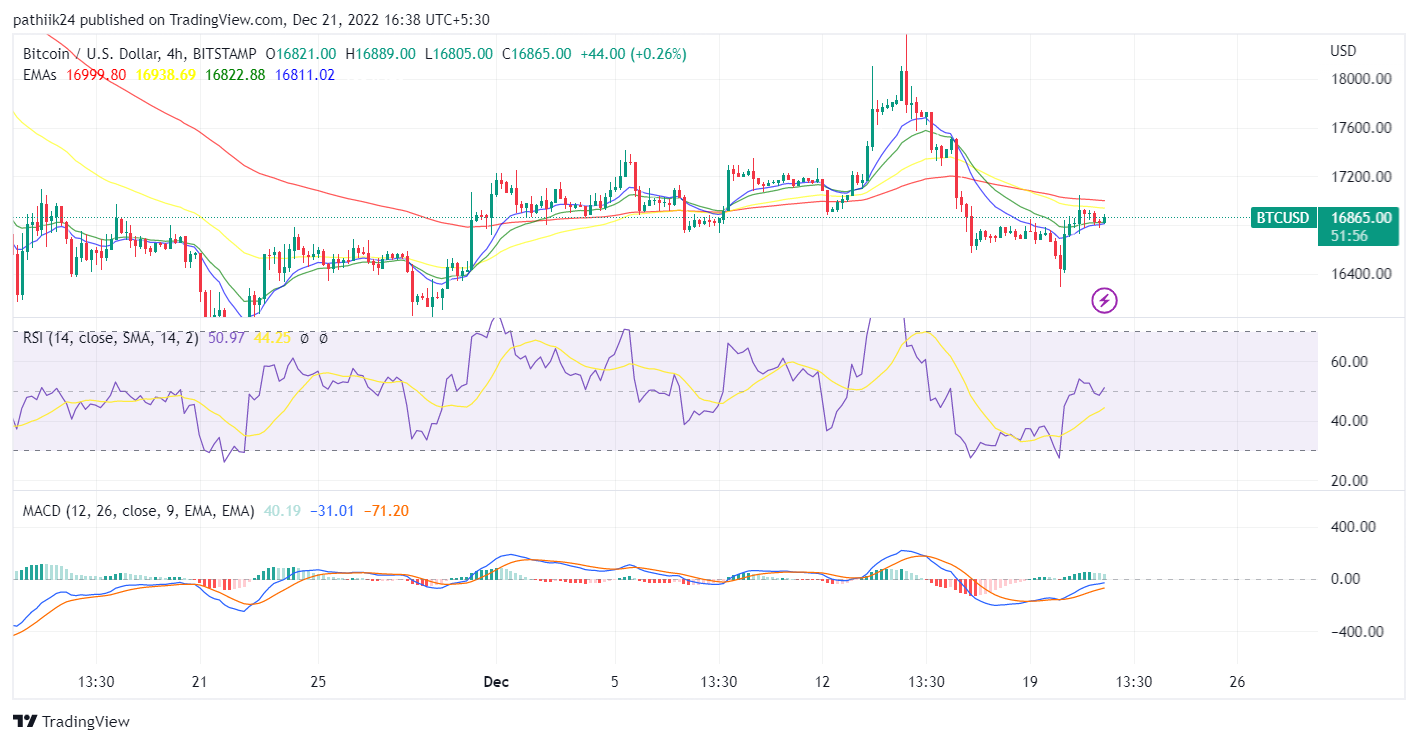 Will Clemente, an analyst at Reflexivity Research, tweeted in reaction to the statistics, “Not perfect yet, but solid for a 12-year-old asset and trending in the right direction,”

Clemente posted a Glassnode chart that shows the fraction of Bitcoin supply controlled by individual investors steadily increasing since 2011. Glassnode defines "retail" as having fewer than ten bitcoins (BTC) in a wallet, which is presently worth about $169,000.

This ratio was less than 12% in early 2020, but it began to rise dramatically in 2022. This move might have a significant impact on Bitcoin's price because the supply held proportion is large, and Bitcoin has a finite supply. Demand may increase, causing prices to rise dramatically.

Bitcoin also looks to have a more uniform distribution of supply across different percentiles than other prominent cryptocurrencies such as Ethereum and Dogecoin. According to CoinMarketCap, addresses with at least 0.1% of the entire supply own over 64% of DOGE and 38% of ETH, compared to only 9% of all Bitcoin.

Does Bitcoin go up with inflation?

When inflation rises, the price of bitcoin usually falls. Asset prices, including bitcoin, would rise if inflation "slows," as would be the case with a positive reading of the American consumer price index, implying that the Federal Reserve and other central banks will defer hiking interest rates.

Will Bitcoin ever go back up?

While Bitcoin has recovered from collapses in the past, such a rebound might take months or years. And if investors continue to sell, Bitcoin's price might fall significantly before rising again. While it is unlikely, Bitcoin might go to zero as a result of a huge sell-off.