The two companies have been involved in a legal battle over a 2020 hosting contract, which Core Scientific claims costs them $2 million in revenue every month.

Lawyers for insolvent Bitcoin mining business Core Scientific told the court that cryptocurrency lender Celsius had yet to pay its mining machine hosting charges since July. Bloomberg initially reported the incident, and Celsius is said to owe $7.8 million in charges linked to the devices.

According to attorneys for Core Scientific, turning down the bitcoin mining machines will save the company a significant amount of money, and the company may earn $2 million per month if it rents out the hosting seats to another mining operation.

Core Scientific was one of the major Bitcoin miners in the sector, and documents from Nov. 7, 2022, reveal that 41% of the company's servers are for clients paying for hosting services. On December 21, 2022, the company filed for Chapter 11 bankruptcy protection, but it stated that the firm's machines will continue to run in order to pay off debt.

Celsius's lawyer, Chris Koenig, announced that the crypto lender has agreed to take down the 37,000 bitcoin mining equipment and terminate the hosting contract. "After today, we're not looking to make a dollar off of Core," Koenig said. The announcement comes as Celsius considers extending consumer claims.

"Celsius is prepared to file a move later this week demanding an extension of the bar date, which is the deadline to file a claim, from January 3, 2023 to early February," the business announced on Twitter. "Our goal is to provide account holders more time to file any proofs of claim." Celsius also mentioned that the motion will be heard on January 10, 2023.

Celsius further claimed that the motion to reject breaches the automatic stay imposed on his estate, and that the mining rigs in question are subject to the jurisdiction of the bankruptcy court for the Southern District of New York (SDNY), where Celsius' case is now being heard.

Celsius was willing to have its rigs disconnected from power on January 3, meaning they would not create any bitcoin, according to their complaint.

Celsius attorney Chris Koenig of the Kirkland & Ellis law firm stated during the hearing on Tuesday, "we've agreed that they may cut off our rigs effective today, and that they don't get to charge us, and we don't continue to pay for it."

Related Read: Bitcoin Investors Relaxed as the Crypto Spiked on its 14th Birthday

According to the 1-day Bitcoin price analysis chart, the cryptocurrency is now trading in an upward channel. The digital asset has enjoyed a significant surge in recent days, with no signs of a reversal. Buyers are driving up the price, while sellers are fighting to keep it below the $16,622 support level.

The Moving average indicator is now in the bullish zone, with the 50 SMA above the 200 SMA. The moving average is at $16,647, and a move over this level may cause Bitcoin to seek the next level. The Relative Strength Index (RSI) score is rising at a faster rate and has reached 45.64, indicating that the market is currently bullish. 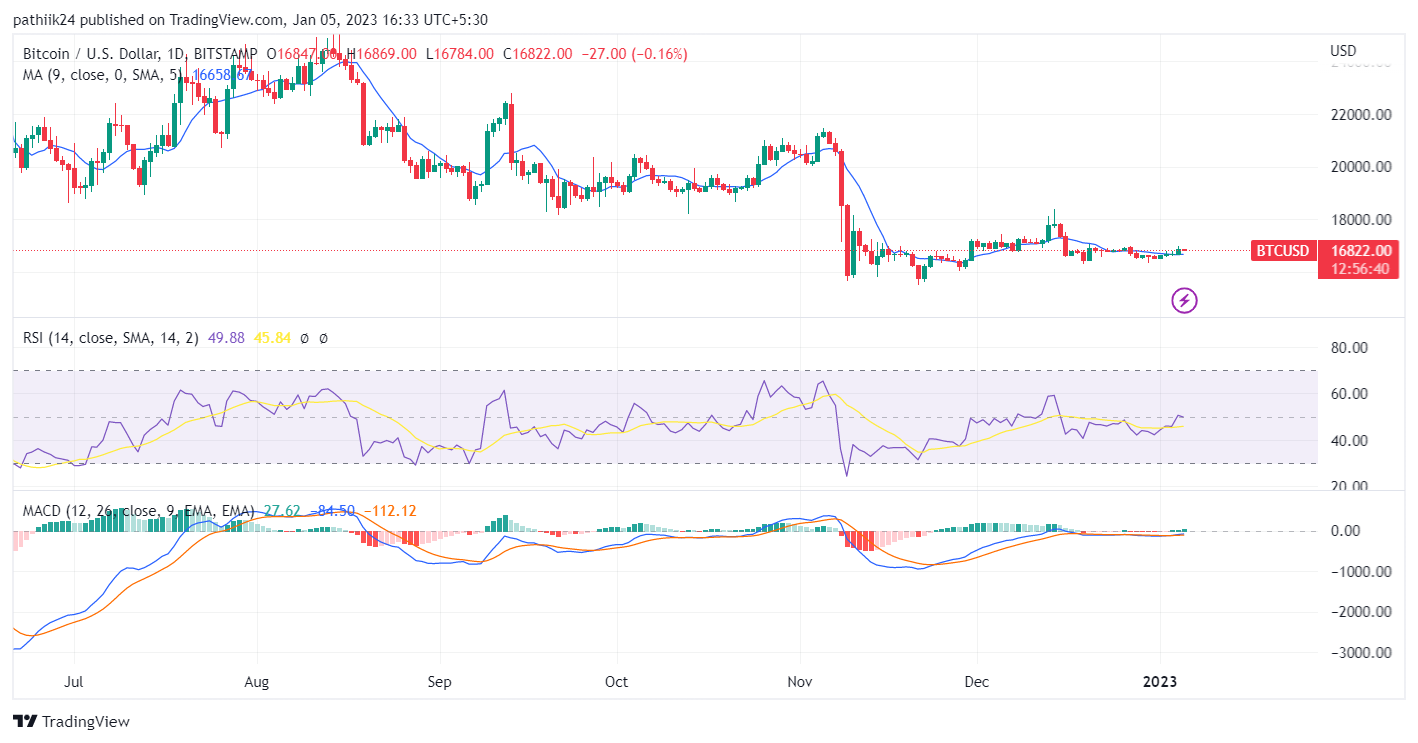 The hourly Bitcoin price analysis chart shows that cryptocurrency has been on a rise in recent hours. Further gains are to be predicted as the bullish momentum grows stronger by the day. The moving average (MA) indicator is also rising, which is a good indication and is currently at $16,774 for the day.

The MACD indicator appears to be bullish as well, with the MACD line above the signal line. The Relative Strength Index (RSI) score is also rising, having achieved a high of 60.66, indicating that the market is now bullish.

Overall, the Bitcoin price research indicates that the cryptocurrency is in an upward trend and may continue to rise. The bulls are now in charge, as the price has remained above the $16,622 support level. The technical indicators appear to be in a bullish posture, indicating continued progress. If the bulls can break over the $16,886 resistance level, we may anticipate another bullish advance in the next few days. 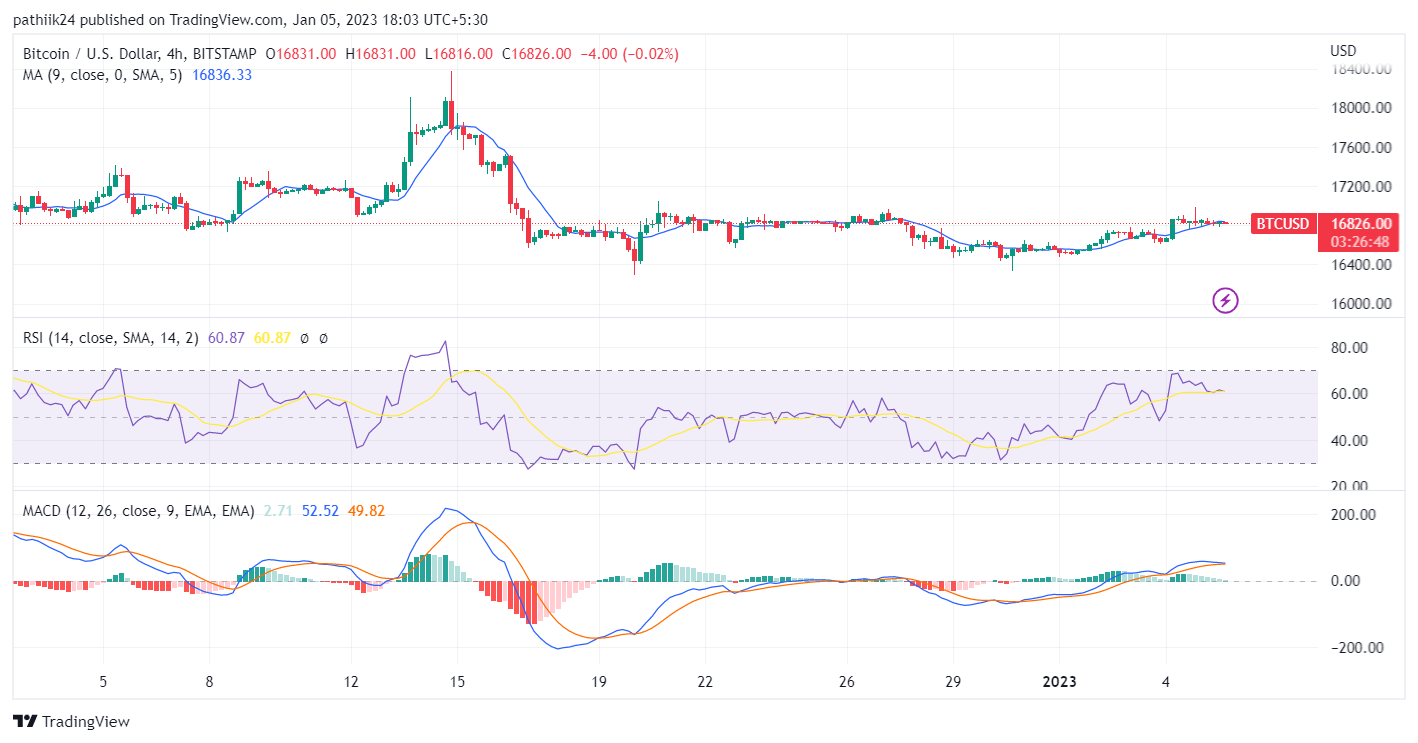 Why do people trust Bitcoin?

Much of Bitcoin's trust stems from the fact that it requires no trust at all. Bitcoin is a completely open-source and decentralized currency. This implies that anyone, at any moment, has access to the complete source code. As a result, any developer in the world can verify exactly how Bitcoin works. Anyone may review all transactions and bitcoins that have been created in real-time.

Can I make money with Bitcoin?

You should never expect to get wealthy via the use of Bitcoin or any other developing technology. It is always prudent to be suspicious of anything that appears to be too good to be true or violates basic economic standards.

Bitcoin is a rising area of innovation, with economic prospects as well as threats. Even while Bitcoin has grown at a rapid pace thus far, there is no assurance that it will continue to expand. Bitcoin may be used to produce money in a variety of ways, including mining, speculating, and starting new enterprises. All of these strategies are competitive, and profit is not guaranteed.

What happens when bitcoins are lost?

When a person loses his wallet, it takes money out of circulation. Lost bitcoins, like all other bitcoins, are still recorded on the blockchain. However, lost bitcoins are permanently dormant since no one can locate the private key(s) that would allow them to be spent again. Because of the law of supply and demand, when there are fewer bitcoins available, those that remain are in more demand and hence grow in value to compensate.