The favourable weather-related events have had little effect on bitcoin's price, which is now trading at $16,826.

According to the federal government's official journal, Brazil President Jair Bolsonaro signed a bill into law to establish a legal framework that incorporates the trade and usage of bitcoin in the country, according to Bitcoin Magazine.

President Bolsonaro signed the law, which had been adopted by Congress with no changes. The new regulations see bitcoin as a digital representation of value that may be used as a form of payment as well as an investment instrument in South America.

According to the bill's reading, a virtual asset is a digital representation of a value that may be bargained or even transferred electronically and utilized for payments or investments.

The new law, which takes effect 180 days from the date of signing, does not make bitcoin or any other form of cryptocurrency legal cash in the country.

The legitimacy granted to the usage of Bitcoin as a payment method has the potential to catalyze increased payment activity in the country. However, the frequency is determined by the acts of the regulator in charge.

The executive branch will appoint government entities to regulate the market, with the assumption that the Central Bank of Brazil (BCB) would be in charge of the usage of this currency, while the country's securities and exchange commission will operate as a watchdog when it is utilized as an investment asset. Both BCB and CVM, as well as the federal tax authorities, assisted MPs in developing the overhaul legislation.

The positive news didn't have any effect on the ongoing Bitcoin price as the graph is still propagating at a slow pace and making a red candle.

Related Read: No Bitcoin Rally on this Christmas, Investors Hoping for the Next Year

According to a review of on-chain data, the current state of the Bitcoin market is one of the least volatile in its history. The last time volatility was this low was at the end of 2018. Similarly to previous years, the price of cryptocurrencies fell steadily during the year.

The entire 24-hour volume of the cryptocurrency market is currently $91.07% of the total $20.01 billion volume of all stablecoins.

The 1-day price chart for Bitcoin price analysis reveals that the price function is covering a range higher as the bulls are guiding the value to hold the price levels above $16,800, as the BTC/USD price is trading at $16,873 at the time of writing, with the coin displaying a reduction in the value of more than 0.28 percent, which is a little but substantial decrease. The 24-hour trading volume has increased by more than 35% to $12.84 billion, showing increased demand for the coin. Furthermore, Bitcoin has the greatest market capitalization in the market at $324 billion.

The EMA50 is moving parallel to the EMA100, indicating that the EMA is in a bullish state. This signals positive momentum, which might be reversed at any time. The MACD, on the other hand, is at -91, indicating that the momentum is very neutral, and a further gain in price is possible if buyers can successfully break over the $16,908 resistance mark.

The relative strength index (RSI) is at 47.63, which places it in the upper part of the neutral zone. The RSI is rising, signalling more purchasing activity in the market. Previously, the indicator's curve had been trending downward for the previous two days. 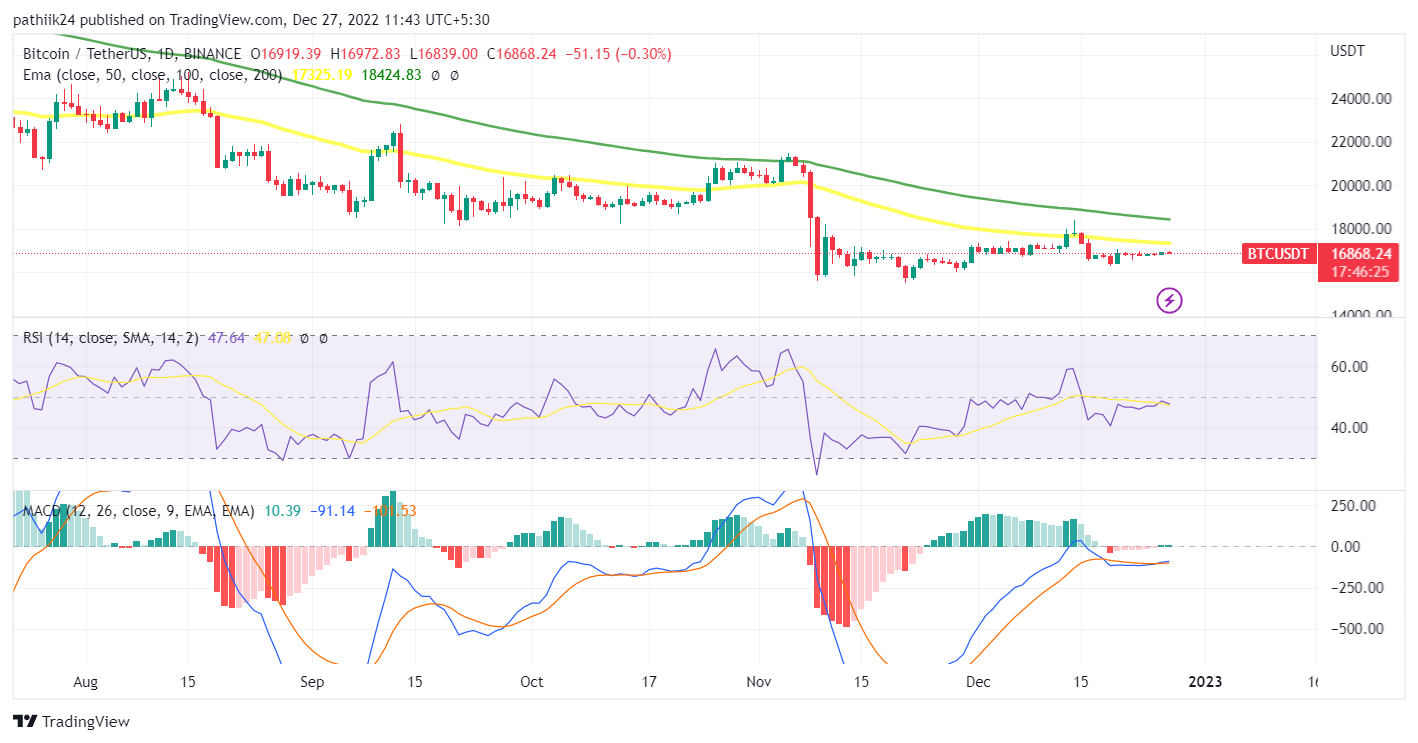 According to the 4-hour Bitcoin price research, the price breakout was higher over the first four hours of today's session, with a solid surge from $16,811 to $16,841. The bulls seized the lead as the price surged high, pushing it to $16,944 before correcting back down.

The MACD is bullish, with both the MACD and signal lines trading above 13.31. The histogram of the indicator is likewise in the bullish zone, indicating that buyers are dominating the market. 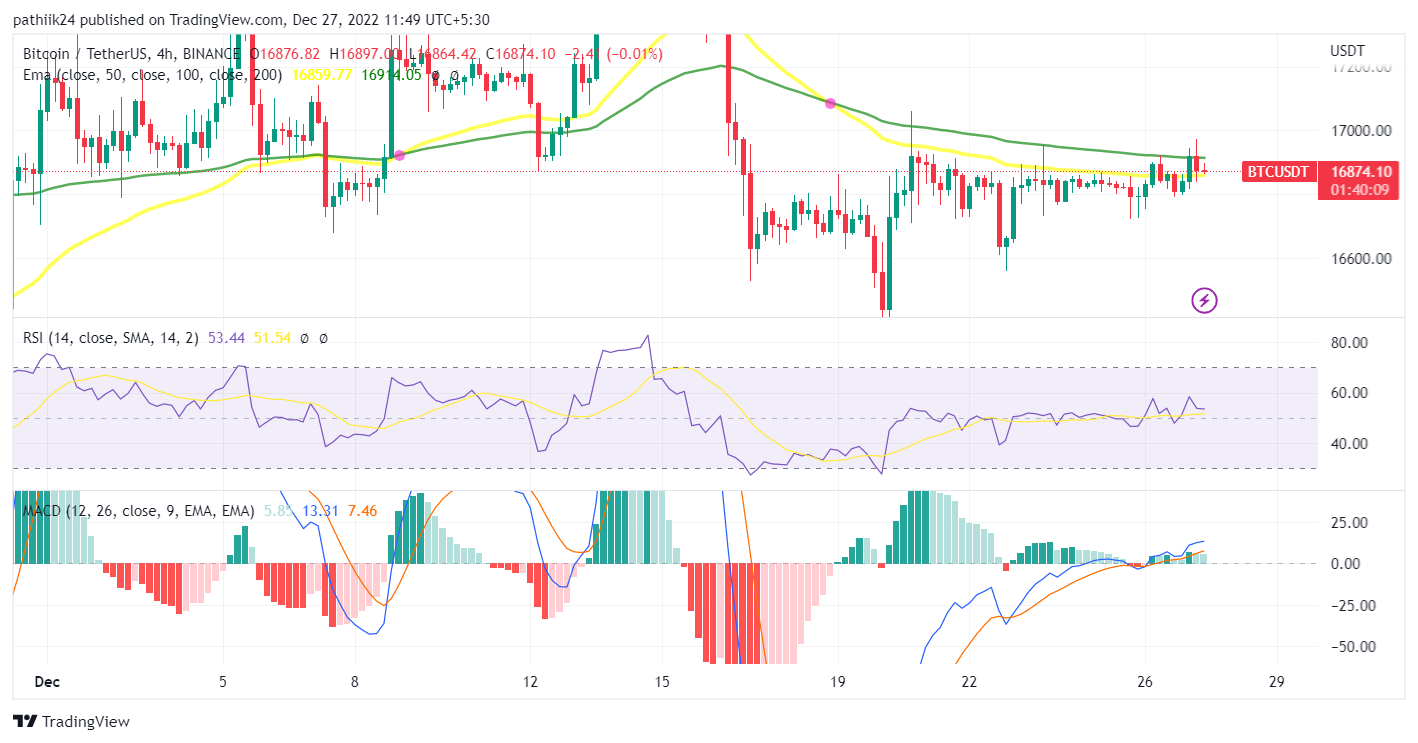 The Bitcoin network hash rate has returned to normal levels, days after frigid conditions across the United States put a burden on the country's energy supply, causing a brief reduction in the hash rate.

According to sources, Bitcoin miners in Texas, which contributes considerably to the nation's hash rate, voluntarily slowed their production to restore electricity to the grid, allowing residents to continue heating their homes. 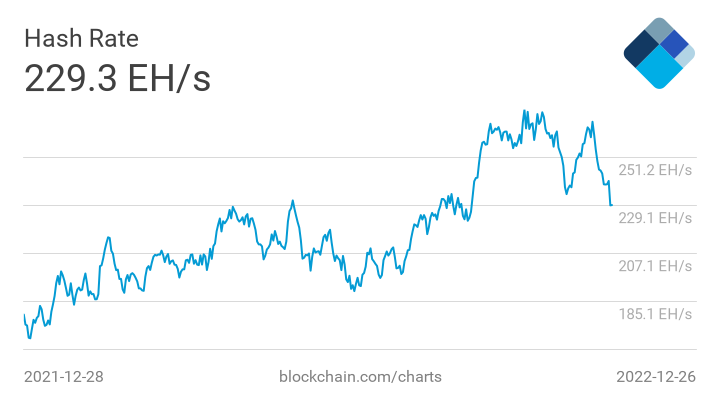 The interruptions appear to have had an impact on Bitcoin's hash rate, which generally varies between 225 and 300 Exahashes per second (EH/s). This fell to 170.60 EH/s on December 25.

However, according to the hash rate mining calculator CoinWarz, the hash rate was back at 241.29 EH/s as of December 27. The number of hashes generated by Bitcoin miners while attempting to solve the next block is used to calculate the currency's hash rate.

The Bitcoin network of miners earns money by validating blocks and getting compensated for their efforts. Bitcoins may be exchanged for fiat cash through cryptocurrency exchanges and used to make purchases from merchants and retailers who accept them.

Is Bitcoin a good investment?

Bitcoin, the most valuable cryptocurrency by market capitalization, is a high-risk investment with extreme volatility. It should be considered only if you have a high-risk tolerance, are financially secure, and can afford to lose any money you put into it.

Many nations recognize bitcoins as a type of currency, but only a handful considers them legal tender. China, Algeria, Bangladesh, Egypt, Iraq, Morocco, Nepal, Qatar, and Tunisia all have outright prohibitions.

What is the stock-to-flow of Bitcoin?

Stock-to-flow models quantify new supply about the current supply. The stock-to-flow ratio of Bitcoin is used by investors to forecast future currency prices. Unlike many other assets, Bitcoin's new supply remains constant regardless of the asset's price.

Why Do Bitcoin Price Changes Impact Other Coins?

Because of its pioneer role, many investors regard it as the crypto market's reserve, and other currencies rely on its value to remain high.