At its root, Ethereum is a decentralised global software platform driven by blockchain technology. Ether (ETH) is the native currency of the Ethereum Blockchain.

On July 30, 2015, the Ethereum project went live thanks to an online crowdsale, a kind of crowdfunding in which cryptocurrency tokens are issued.

Since its inception, Ethereum has been based on a system of open transactions. 2013 saw the creation of Ethereum by programmer Vitalik Buterin. Gavin Wood, Charles Hoskinson, Anthony Di Iorio, and Joseph Lubin were other Ethereum founders. In an effort to address Bitcoin's drawbacks, Ethereum was introduced.

With Smart Contracts and Dapps, which provide more blockchain possibilities than Bitcoin originally, Ethereum set out to create a decentralised platform that would inspire the developer community to build upon what was at the time new technology. These features were missing from Bitcoin. The fact that Ethereum supports both permissioned and permissionless transactions is one of its major characteristics.

Following a preliminary fundraising effort, Ethereum was introduced in 2015 and 72 million coins were minted. The people who contributed to the inaugural project funding received these initial coins.

Ethereum trailed Bitcoin in market capitalization in 2018 and has remained strong thereafter, despite having a terrible start to this year when it suffered losses to hackers.

How does Ethereum work?

Pay great attention to this section since the Elements of Ethereum outlined above are crucial to how Ethereum functions.

The Ethereum network is made possible by people acting as "nodes," as opposed to a centralised server, on thousands of computers throughout the world. As a result, the network is decentralised, very resistant to assaults, and basically impervious to failure. It makes little difference if one computer fails because the network can function without hundreds of others.

In essence, Ethereum is a single decentralised infrastructure that powers the Ethereum Virtual Machine (EVM). Every node has a copy of that computer, therefore all interactions must be confirmed before any updates can be made to anyone's copy.

Otherwise known as "transactions," network interactions are recorded as blocks on the Ethereum blockchain. Before committing them to the network and serving as a transaction history, miners verify these blocks.

Through the use of randomly chosen validators, PoS, a cryptocurrency consensus process utilised by Ethereum, confirms transactions and generates new blocks. For instance, 50 ETH must be staked before a person may become a validator on Ethereum. When a certain number of validators confirm that a block is accurate, it is completed and closed. Blocks are confirmed by many validators.

The whole Ethereum network is open to the public. To validate the modification and add the finished blocks to everyone's copy of the ledger, miners broadcast the blocks to the rest of the network. Confirmed blocks operate as a complete record of all network transactions since they cannot be altered.

The following are the primary justifications for investing in Ethereum and why, in our opinion, it is a wise decision when compared to many other cryptocurrencies.

These days, there is increasing interest in the debate between Bitcoin and Ethereum. Bitcoin has become a very famous and well-known cryptocurrency all over the world. Among all currently accessible cryptocurrencies, it also has the greatest market valuation. Although Ethereum is not far behind Bitcoin in terms of popularity, it is now trading at $1,178 as of the time of writing this article, whereas Bitcoin is currently trading at $16,522. 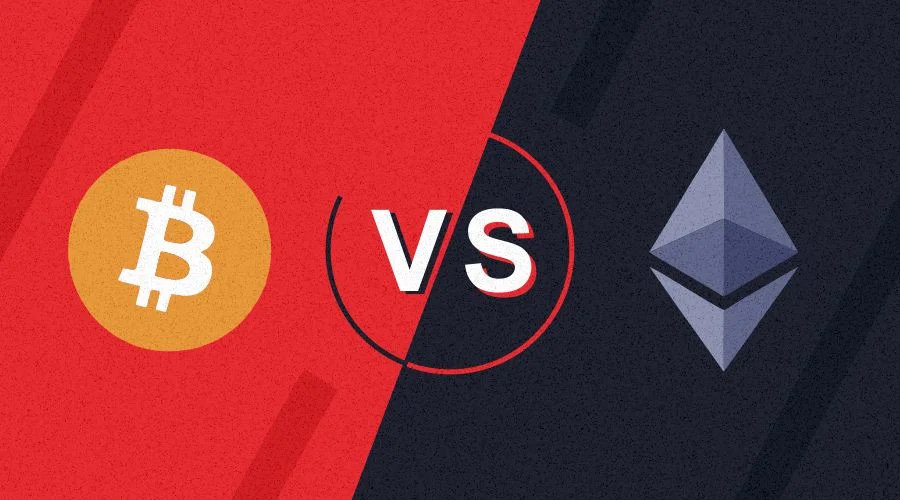 In order to assist you better comprehend the two and make your own decision, let's discuss some of the main features that set the two cryptocurrencies apart.

The Merge was the union of two systems at the time: the Proof-of-Stake system and the Ethereum Mainnet. With this merger, the Ethereum blockchain's proof-of-work mechanism was changed to a proof-of-stake system.

Ethereum has officially shifted to a PoS mechanism as of mid-September 2022. It gave rise to Ethereum 2.0, a new iteration of the cryptocurrency.
With the transition, the whole blockchain has been switched to new proof-of-stake (PoS) validator nodes, which cost 32 ETH to join. Investors' access to Ether tokens won't change at all, and Ethereum-based apps should continue to run as usual.

The following are some advantages of PoS over PoW:

Since the Merge marks a fundamental change in how the Ethereum blockchain operates, it is the biggest change in a blockchain's core functionality in recorded history. The Merge has several, unanticipated effects, which we have discussed in more detail in previous pieces.

The Merge is only the first in a planned sequence of enhancements to the Ethereum blockchain. The Shanghai makeover comes next. Ethereum anticipates experiencing the "surge," "verge," and "purge" after Shanghai.

The verge, which is the planned implementation of the "Verkle trees" mathematical proof, will let blockchain nodes to function without downloading the whole chain's history.

Legacy data on chain will finally be deleted as a result of the purge. These three improvements taken together will provide a blockchain that is smaller, more user-friendly, and significantly quicker. It will provide Ethereum the essential functionality, and it should be available by September 2023 at the latest.

As part of a substantial update, Ethereum is switching to the proof-of-stake protocol, which enables users to confirm transactions and create new ETH depending on their ether holdings. Ethereum now has two levels, though. Transactions and validations take place at the execution layer, which is the first layer. Consensus is the second layer, where attestations and the consensus chain are kept up to date.

According to market capitalization, Ethereum is the second-most valued cryptocurrency and is viewed as the silver to Bitcoin's gold. Like any investment, there's a chance that Ethereum's higher risk will also result in higher profits.

Due to the current increase in interest in the Ethereum blockchain, both experts and analysts anticipate that Ethereum's predicted growth will reach extremely high levels. With the growing adoption of cryptocurrencies, Ethereum has incredible potential over the next years. But in the end, it's a cryptocurrency, and they're all extremely risky and unpredictable.