FTX Crash Pulls Down The Whole Crypto Market, Records Lowest in the Year

The cryptocurrency sector is still recovering from one of the greatest crises, and its market capitalization has taken a severe hit.

The market capitalization of cryptocurrencies has taken a severe hit as one of the greatest crises continues to devastate the sector, sending it to lows not seen in years and far below its all-time high (ATH).

According to data from CoinMarketCap retrieved on November 18, the total market cap of all cryptocurrencies is currently $834 billion, which is close to the figures last recorded in December 2020, just before the market started rallying upwards, surpassing $1 trillion and ending up at above $2.4 trillion by May 2021. 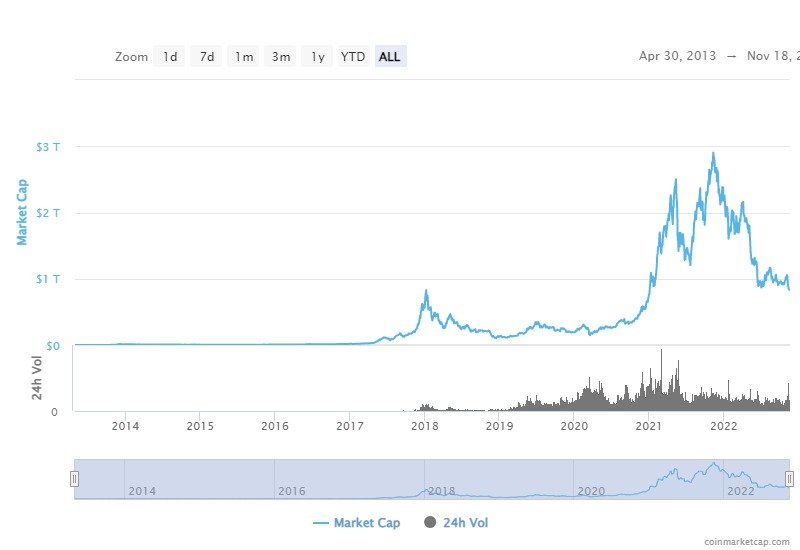 The data show that until the FTX liquidity constraint and following market-wide bloodbath knocked the market below $1 trillion, it only managed to duplicate comparable performance twice more, in November 2021 and March 2022.

The crypto market is currently worth barely a fraction of its all-time high (ATH), which occurred on November 8, 2021, when it hit $2.9 trillion. Current numbers show a 71.44% decrease from that record.

The Decline in Bitcoin and Ethereum

However, as of Thursday morning, the market value, or "price floor," of individual NFTs from the Bored Ape collection had plummeted to 58 Ethereum, or $70,0000 — a 95% decline in value.

The Sam Bankman-Fried incident is said to have decreased general crypto pricing and harmed Bored Ape Yacht Club's NFT values, which has resulted in falling NFT prices after the bankruptcy of crypto exchange behemoth FTX earlier this month.

Late in April, in reaction to the buzz surrounding the usage of NFT land plots for its metaverse platform Otherside, Bored Ape's NFT pricing reached a peak of $429,999. However, this month, NFT prices have decreased by 82% due to declining sales.