How Layer 2 Solutions Could Contribute to Ethereum’s Future

It has been almost 6 weeks since Ethereum officially transitioned to a proof-of-stake (PoS) with the Merge. The Merge marked the end of the second of three phases of the transition process. The impending event will only witness an official change in consensus, with the Ethereum blockchain beginning to execute transactions on the PoS chain. However, there will be little effect on scalability or gas fees.

The rise of Ethereum is not without its drawbacks. Transaction speeds drop as the network grows busier, and gas fees rise. Layer 2 refers to solutions that increase application scalability by processing transactions outside of Ethereum's main network while utilizing its decentralized security paradigm.

The Need for Layer 2 Solutions

The scalability changes are expected to occur following the conclusion of the third phase, which will add sharding, a type of parallel processing that Ethereum founder's and developers' commitment would dramatically enhance Ethereum's transaction throughput.

Right now the Ethereum L2 Transactions are below the average TPS (15 TPS). ETH transaction declined after the merge and is still consolidating between 11-13 Transactions per sec speed.

The above chart shows the all-time Ethereum transactions/sec. The chart shows the value of TPS on Feb 24, 2019, recorded at an all-time high. The TPS speed on the network was around 20 ETH/sec at that time. Since then, it’s been reduced even after the merge.

According to Blockchain Orbiter Finance statistics, the number of Ethereum L2 transactions just surpassed 5.78 million. As a result, it hit a new weekly high, with Arbitrum accounting for 46.59%. 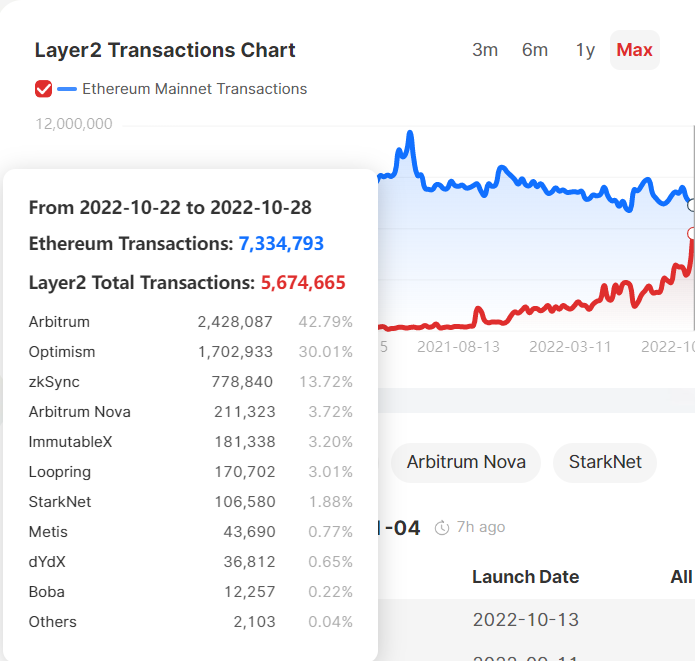 Along with Arbitrum, other L2s including Optimism and zkSync contributed to the growing amount of L2 transactions on Ethereum.

The rising volume of L2 transactions might be the key to enhancing Ethereum's long-term growth prospects.

The Upcoming Issues Associated with L2

According to the study, this expansion might "increasingly accrue profits away from the Ethereum mainnet."

This shift may reduce staking returns for Ethereum validators, "which may create new vulnerabilities to the security of the Ethereum network."

According to the paper, which was published by Stefan Piech, the thesis is likely to be realized due to the competitive nature of transaction speeds and prices (which are still too high, according to Vitalik Buterin). It compared the top layer-2 networks to Ethereum's 15 TPS (transactions per second) and average costs.

The Competition in TPS and Gas Fee

Polygon claimed the most TPS with 65,000 and an average cost of $0.25. Arbitrum emerged in second place with 4,500 TPS and a comparable transaction price, while zkSync and Metis both claimed approximately 2,000 TPS.

The introduction of zero-knowledge rollups (zkEVM) for the Ethereum Virtual Machine (EVM) has hastened the expansion of the layer-2 ecosystem. According to the research, the bulk of Ethereum apps will likely migrate to L2 since dApp capabilities may be expanded using zkEVM.