How Much Energy Does Bitcoin Mining Consume

According to the latest data, Bitcoin now consumes approximately 110 Terawatt Hours per year – 0.55% of world electricity production which is less than half the energy that the banking sector does.

Bitcoin, Ethereum, dogecoin, and other prominent cryptos, as well as crypto-reliant NFTs, achieved all-time highs in 2021, generating concerns about the increasing amount of energy required to mine the coins.

According to a research report titled "Revisiting bitcoin's carbon footprint," published in February, as the crypto markets fell in 2022, crypto mining continued to consume roughly as much power as Argentina and have a carbon footprint comparable to that of Greece. As the cost of energy for crypto mining climbs, so does the quantity of carbon and e-waste produced, contributing to the growing climate issue.

On the surface, the subject of energy use seems reasonable. According to the Cambridge Center for Alternative Finance (CCAF), Bitcoin now consumes approximately 110 Terawatt Hours per year – 0.55% of world electricity production, or roughly the yearly energy consumption of small countries like as Malaysia or Sweden. This appears to be a lot of energy. But how much energy does a monetary system need?

In this section we are going to cover How bitcoin is mined, What are Mining tools, and how much energy Bitcoin consumes.

What is Bitcoin Mining?

When bitcoins are traded, computers all around the world compete to finish a calculation that generates a 64-digit hexadecimal number, or hash, for that bitcoin. This hash is entered into a public ledger so that anyone can verify that the transaction for that particular bitcoin occurred. The computer that solves the computation first receives 6.2 bitcoins or approximately $134,000 at current prices.

Similar mining techniques are used by other cryptocurrencies and NFTs, which adds to the overall energy consumption.

What are Mining Rigs?

It's a basic computer with many graphics cards, or GPUs, rather than the single-card conventional, and it performs the calculation. Rigs commonly use powerful GPUs from Nvidia and AMD to do calculations and require high-wattage power sources. Mining's popularity resulted in a shortage of graphics cards, which drove up their prices.

It can be difficult to understand how something with no physical manifestation can be so resource-intensive. This is often referred to as the new gold rush. To verify and add transactions to the blockchain, the Bitcoin network relies on thousands of miners running energy-intensive devices around the clock. This is referred to as "proof of work."

Bitcoin's energy consumption is determined by the number of miners active on its network at any given time. These miners must compete to be the first to add the next block to the blockchain and collect incentives. Because only one miner can add a new block every 10 minutes, the competitive structure wastes a lot of energy.

Many larger enterprises are being pushed to scale up or improve their equipment in order to maintain a competitive advantage over other miners. As a result, there are now dozens of mining operations throughout the world with hundreds, if not thousands, of rigs always functioning. Heat is one of the consequences of these large-scale processes.

Application-specific integrated circuit miners, the most common type of specialized computer equipment used for cryptocurrency mining, generate a lot of heat when executing hashing functions and must be kept cool to avoid becoming less efficient or burning out. Smaller operations may merely require fans and a cool climate to keep temperatures under control, whereas major mining facilities require industrial-style cooling systems. This increases the quantity of energy consumed even further.

Why Bitcoin Mining is Considered a Global Problem?

In the United States, fossil fuels account for more than 60% of all energy sources. Natural gas accounts for the majority of that amount, with coal accounting for the remainder. The carbon dioxide created by fossil fuels is released into the atmosphere, where it absorbs heat from the sun and generates the greenhouse effect.

As mining rigs require more energy, surrounding power plants must provide more electricity to compensate, increasing the possibility of the use of fossil fuels. States with faltering coal power facilities, such as Montana, New York, and Kentucky, are attempting to capitalize by courting cryptocurrency mining operations.

There's also the matter of electronic trash to consider. This can include malfunctioning computers, wiring, and other equipment that the mining operation no longer needs. The quantity of electronic garbage produced by bitcoin mining is 34 kilotons, which is equivalent to the amount produced by the Netherlands. 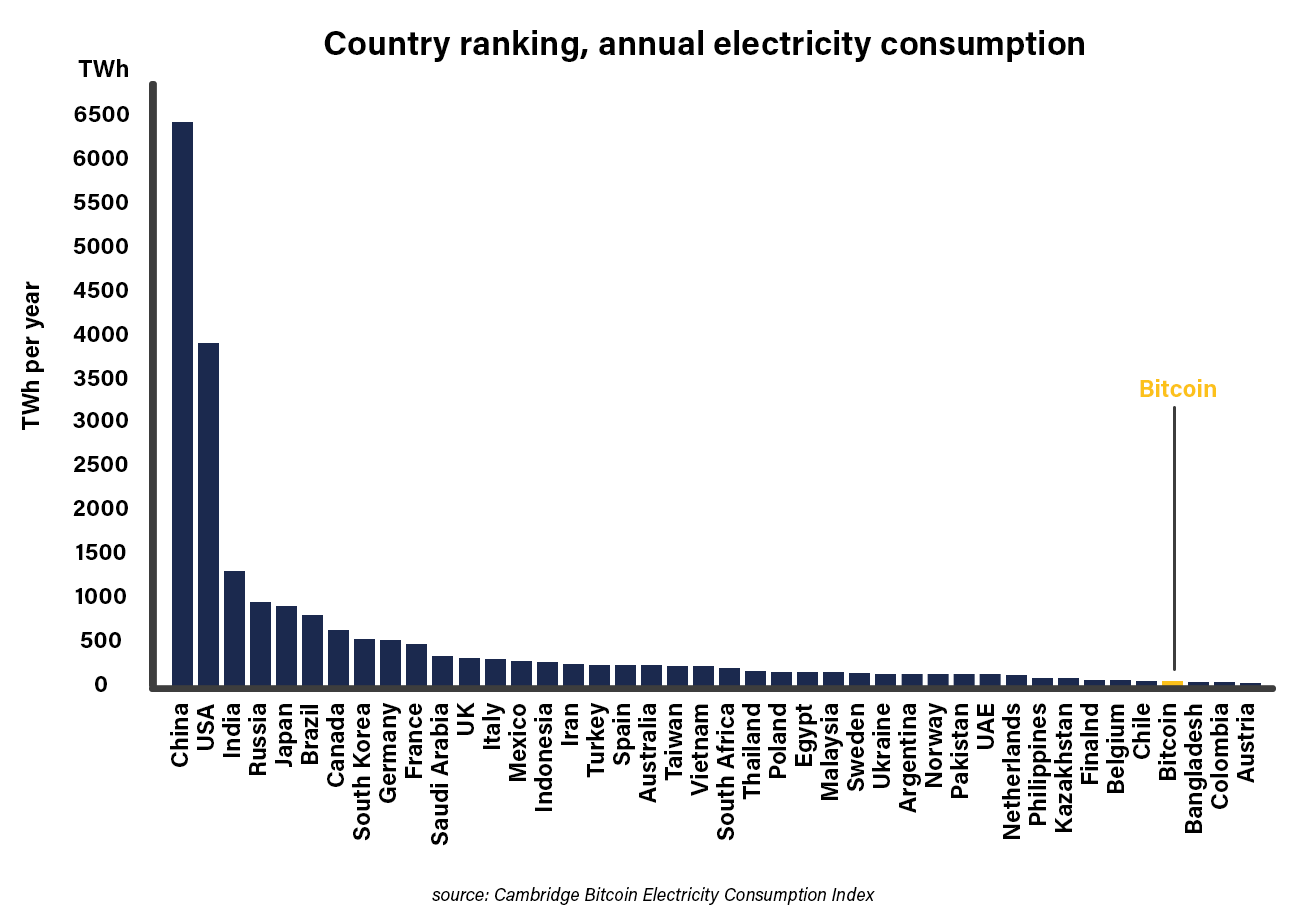 While Bitcoin's electricity use may seem like a lot, it pales in comparison to the energy required by traditional banks. The entire bitcoin ecosystem is claimed to consume less than half the energy required by banking systems. That is hardly unexpected given the enormous amount of physical branches, printing facilities, ATMs, data centers, card machines, and secure transportation vehicles required to maintain the fiat currency system. 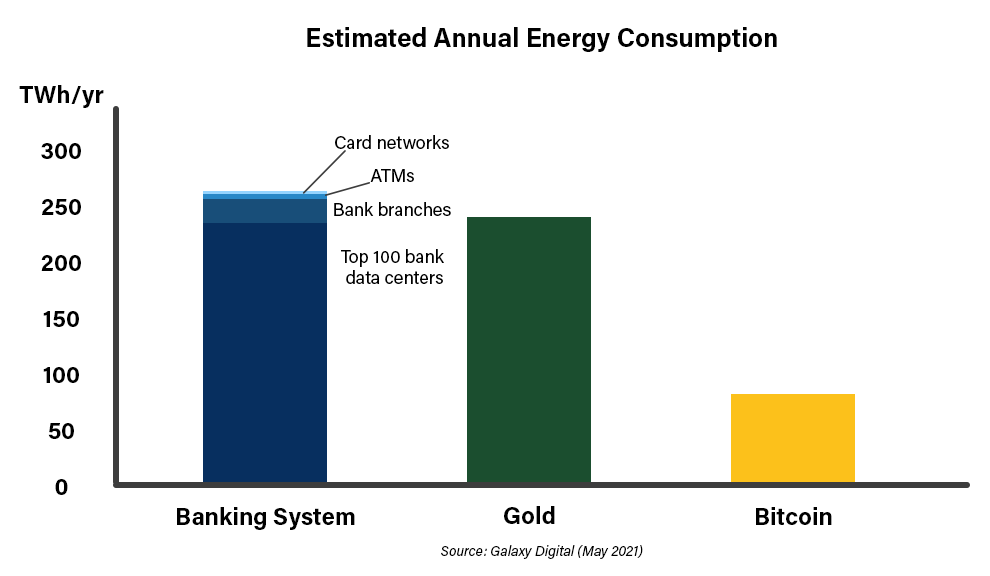 In 2021, there will be a significant drive to make bitcoin mining, and also other cryptocurrency mining, more sustainable and ecologically friendly. The Crypto Climate Accord encourages the cryptocurrency sector to seek out new sources of energy and intends to equip crypto firms with a "open-source toolbox of digital solutions" to help the industry achieve net-zero emissions by 2030.

Finally, there may be less reason to be concerned than the terrifying headlines suggest. Bitcoin miners are unlikely to grow at the same rate as they did a few years ago. This is due, in part, to bitcoin halving, a feature built into the Bitcoin network that halves the block rewards miners receive every four years. To preserve margins and keep large-scale mining operations viable, miners will need to shift toward more efficient equipment and cheaper sources of energy unless bitcoin's value continues to climb to compensate for the decline.

Do Bitcoin miners use a lot of electricity?

Proof-of-work cryptocurrency mining has not been embraced in every part of the world due to the huge demand for electricity. Miners seek low-cost energy to maximize earnings, yet their energy-intensive activities often raise overall power costs.

Is crypto mining a waste of energy?

However, cryptocurrency has a dirty little secret that is extremely important to the actual world: it consumes a lot of energy. How much power do you have? Bitcoin, the world's largest cryptocurrency, currently consumes an estimated 150 terawatt-hours of electricity per year – more than Argentina's whole population of 45 million people.

Does Bitcoin mining hurt the environment?

"To put it another way, in some cases, Bitcoin mining causes climatic damage that exceeds the value of a coin. This is quite concerning from a sustainability standpoint." Carbon emissions from mining a single bitcoin increased 126-fold from 0.9 tons in 2016 to 113 tons in 2021.