Hyperledger is an open-source initiative that was designed to aid in the development of distributed ledgers based on blockchain technology.

For a broad audience in the web3 space, Blockchain means only Bitcoin and Ethereum to them. As decentralization gains popularity, several blockchain initiatives have developed to promote blockchain development.

One blockchain project that has received little media attention but is doing enormous work to make the life of blockchain engineers easier. Because several blockchains are built from the ground up for various reasons, the Linux Foundation established the Hyperledger Project to democratize and standardize blockchain for the corporate sector.

Hyperledger is an open-source project established by the Linux Foundation. It provides a broad set of projects and frameworks to organizations and developers for them to construct blockchain networks and apps. The Hyperledger Project intends to make DLT (Distributed Ledger Technology) cooperation easier for corporations, developers, and entrepreneurs.

Hyperledger was designed to accelerate the development and implementation of cross-industry blockchain platforms. It has the support of large organizations such as IBM and many others from a variety of industries, including finance, IoT, banking, and industrial.

Keep in mind that Hyperledger was created to aid and encourage the evolution of blockchain technology, not any one cryptocurrency.

According to the Hyperledger website, blockchains may alter online commerce by encouraging faith, openness, and integrity. It was built specifically for that purpose. The Hyperledger blockchain is made up of over 100 firms, including industry powerhouses like Nokia, IBM, and Samsung, and it meets every month to oversee the development of potential blockchain frameworks.

Hyperledger facilitates the development of blockchain systems and applications by providing the necessary infrastructure and protocols. Hyperledger Greenhouse (the frameworks and tools that comprise Hyperledger) is used by developers to create commercial blockchain initiatives. Participants in the network are all familiar with one another and may engage in consensus-making procedures.

Hyperledger Fabric and Sawtooth are two of the most well-known Hyperledger frameworks.

Hyperledger Fabric is a distributed ledger technology with robustness, scalability, adaptability, and secrecy built on a modular design. It may handle problems that arise across the economic ecosystem since it is explicitly designed to allow pluggable implementation of diverse components.

Fabric is the outcome of a collaboration between IBM and Digital Asset. It was designed primarily as an integration platform for creating highly scalable Blockchain apps with DLT. 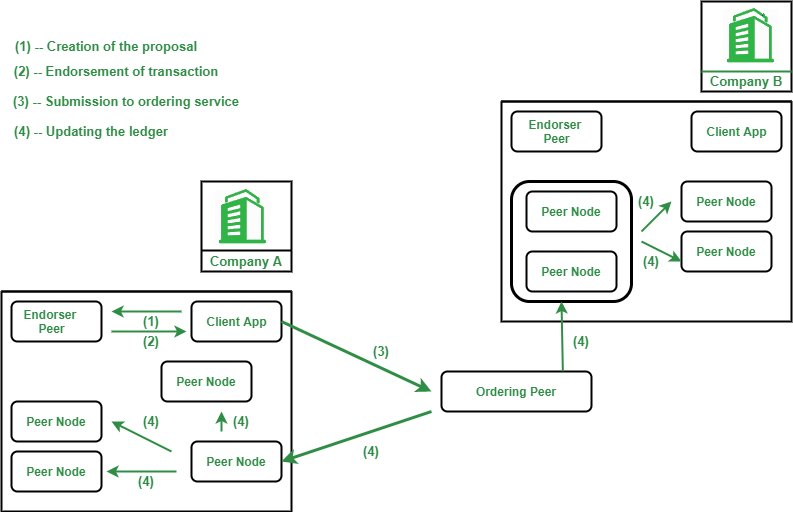 Hyperledger Fabric, unlike an open, permissionless system that permits unknown players to join the network, enrols users through a trusted membership service provider.

The ledger subsystem of Hyperledger Fabric is made up of two parts:

The Global State: The component describes the ledger's status at a certain point in time.

The Transaction Record: It keeps track of all transactions that have resulted in the present value of the global state.

As a result, a ledger is the product of the transaction log history and the global state database.

Hyperledger Sawtooth is a blockchain platform for enterprises that are used to develop distributed ledger networks and applications. It is constructed in such a way that it maintains ledgers spread and smart contracts secure.

By separating the core system from the app domain, the platform promotes blockchain development. Developers can specify the business rules in any language of their choice. The modularity of Hyperledger Sawtooth allows organizations to tailor permissions, transaction rules, and consensus algorithms to their own needs.

Although the above two are the main Hyperledger projects, other tools and frameworks are as significant as well.

Other Hyperledger Tools and Frameworks

Hyperledger Iroha: A blockchain framework for integrating into existing networks. Iroha features a modular design, control-based access, library access, and asset and identity management. It is utilized in industries such as finance, healthcare, and education.

Hyperledger Besu: A public Ethereum codebase that is open source and may operate on private permissioned platforms or the Ethereum public network. The Ethereum Virtual Machine (EVM), consensus mechanisms, user-facing APIs, and monitoring are all included.

Hyperledger Caliper: A blockchain benchmarking application. Caliper is a tool for assessing the performance of blockchain installations. It does not, however, come with established standards since various blockchain implementations may require distinct sets of standards.

Hyperledger Explorer: A dashboard utility tool for monitoring, searching, and maintaining blockchain and associated data. It allows a company to audit nodes, blocks, transactions, and smart contracts. It also allows users to modify the code.

Hyperledger Burrow: A blockchain node for Ethereum smart contracts that have been granted authorization. On the EVM, this manages transactions and smart contract code execution.

Real-World Use Cases of Hyperledger Applications

IBM: IBM is developing an application for the Postal Savings Bank of China using Hyperledger Fabric, Node.js for SDK and application layer development, and Golang for chain code development.

DigiPharm: DigiPharm is the first-ever solution for value-based payments in healthcare that combines blockchain and smart contracts. The platform employs smart contracts on the Hyperledger Fabric network to acquire outcomes amongst major healthcare stakeholders and contractual parties. Within the DigiPharm system, Hyperleger Indy has been utilized to control data consumption and identification.

HealthVerity: It is a cloud-based SaaS tool that allows enterprises to manage and administer permission rights between external providers and internal systems. The app, which is built on Hyperledger Fabric, is ideal for businesses that need to keep individual consent rights to comply with privacy legislation like HIPAA, GDPR, TCPA, and CCPA.

While most blockchain initiatives focus on tokens and cryptocurrencies, Hyperledger projects can establish the foundation for large-scale industrial and non-monetary applications. Furthermore, the Hyperledger initiatives are supported by well-known IT corporations such as IBM and Linux.

These distinct Hyperledger frameworks and tools demonstrate that Hyperledger has enormous promise for Blockchain technology. These techniques may be used to create extremely scalable and resilient industrial and non-monetary applications.