The general Bitcoin price movement is declining impulsively following a large rejection from a long-standing resistance level at $18k.

The largest Bitcoin (BTC) holders, have sold the most BTC in 30 days ever recorded. According to Glassnode on-chain statistics, these whales have offloaded a total of 280,000 BTC in the previous 30 days.

Whales are believed to have around 9 million BTC, constituting a considerable part of the entire BTC supply.

These major Bitcoin holders wield considerable market power, and their selling actions can have an impact on the price of BTC. 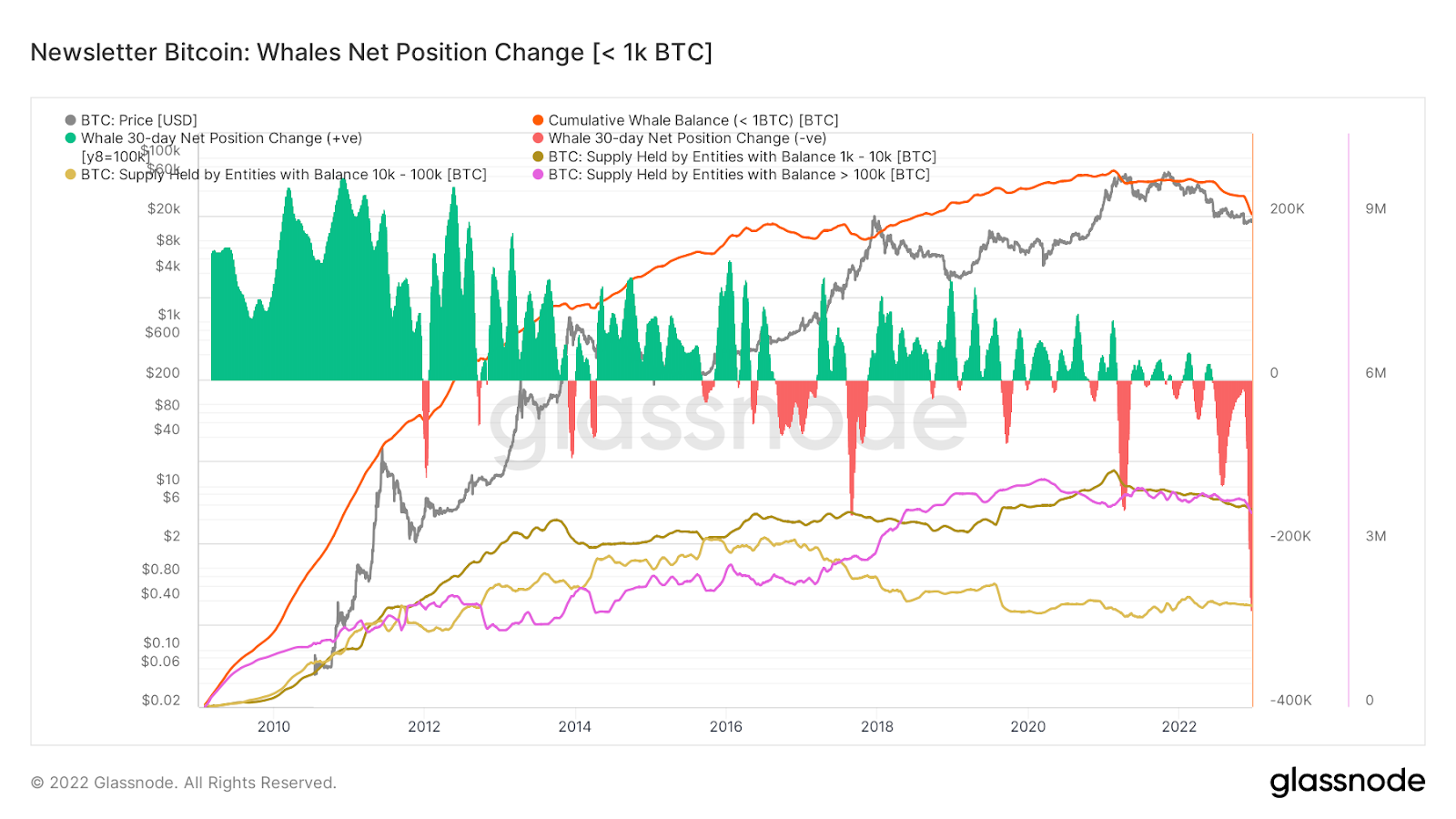 Related: What is Bitcoin Blockchain?

On Dec 16, Amid Binance collapse rumours, Glassnode reported that “For Binance, we estimate total #Bitcoin holdings at around 584.6k $BTC”. This is much more than what Binance claims to be deposited on their proof-of-reserves wallet which is around $359.3K BTC.

Cryptocurrencies fell with US markets as the economy struggled to adjust to the Federal Reserve's relentless tightening. The slump comes after a brief recovery rally that saw the token recover some of its November losses. Bitcoin has dropped nearly 65% since the beginning of the year.

Bitcoin fell back below $17,000, and other smaller cryptocurrencies known as altcoins had considerably sharper drops, raising concerns that the digital-asset market's difficulties are far from finished.

After falling as much as 3.7% on Friday, the biggest token traded below $16,700 on Sunday. Earlier this week, Bitcoin hit its highest price since Sam Bankman-cryptocurrency Fried's firm declared bankruptcy last month. Ether fell as much as 6.3% on Friday, while other altcoins dropped as well.

A typical bearish market structure is building on the 4 hours, identical to the higher timeframe. After failing the previously constructed bullish trendline, the price has fallen below the $16,800 minor support level. The $16,800 level and the broken trendline are now seen as resistance, with the former already pulling the price lower.

Furthermore, the RSI indicator, while recovering from an oversold position, is still far below the 50 mark, indicating a strong negative momentum that might soon push the price down into the critical $15,500 level. 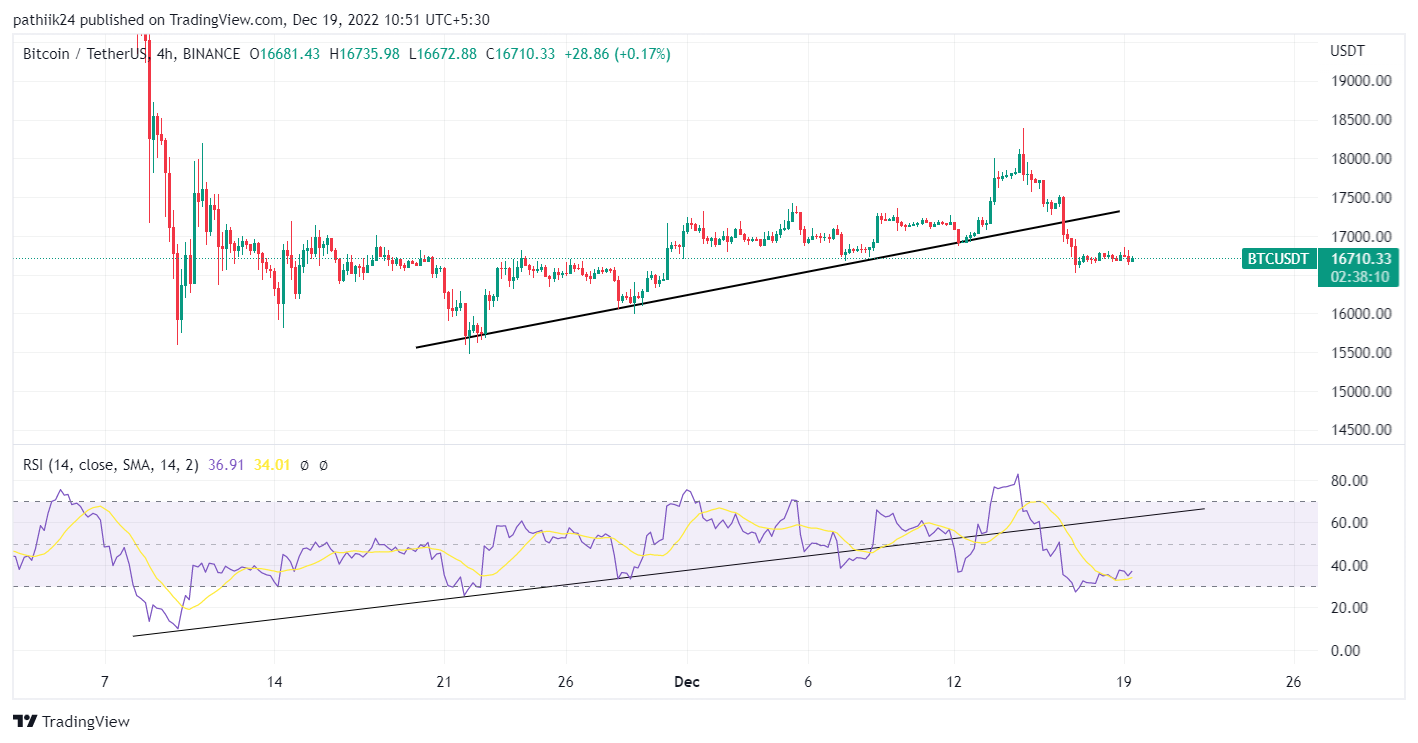 The 14-day RSI indicator also did the same and fell prey to the same rising channel trend which led to the falling RSI giving investors a great chance to take the price beyond the current resistance of $17,000.

The MACD indicator shows a recent dip with a previous green curve from 24 Nov to 18 Dec. 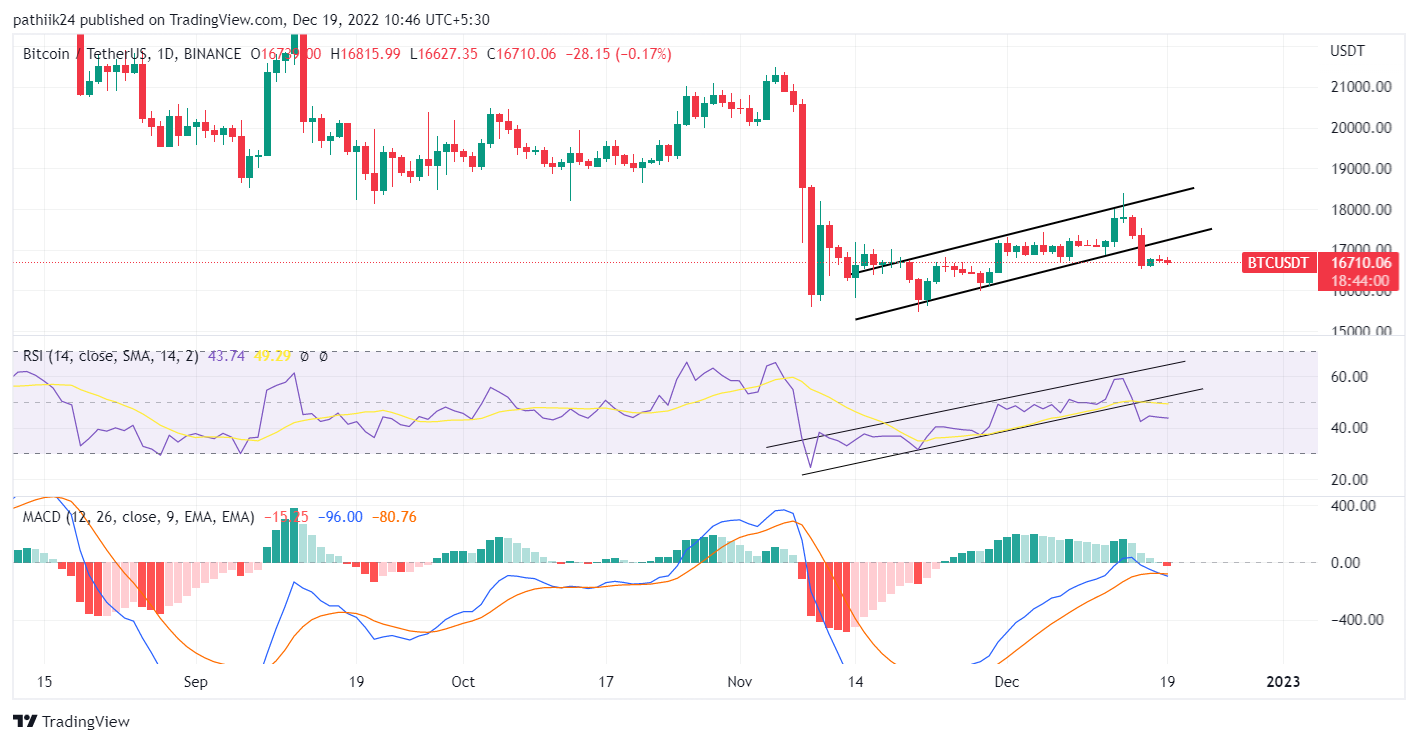 Another Twitter user with a handle named Profit Blue has deduced his Bitcoin analysis saying that Bitcoin could jump again above the 17000 mark:

“There is a high chance price moves back up to the 17500-17700 area then drops hard to 10k. This move will be quick and could manipulate many traders and in the process, the price will print a double top pattern that could look like the one below.”

The Exchange Whale ratio measure, which is determined by dividing the input of whales to exchanges by the total inflows daily, is commonly used to depict whale behaviour. This statistic increased significantly during the previous cycle and the initial portion of the 2018 bear market, as many whales sold their coins on exchanges to secure their earnings and limit their risk. This conduct resulted in a horrific downward trend. However, the measure began to fall during the second phase as the price began to rebound and begin a fresh bull run.

Recently, a similar trend has been observed as whales deposit fewer coins onto exchanges than the rest of the market players, which might indicate that a price bottom is approaching. This might be due to FTX's insolvency and eventual collapse since whales do not trust the exchanges enough to keep their money on them. This drop in the Whale Ratio gauge might cause a supply shock and, eventually, a price bottom to develop shortly. 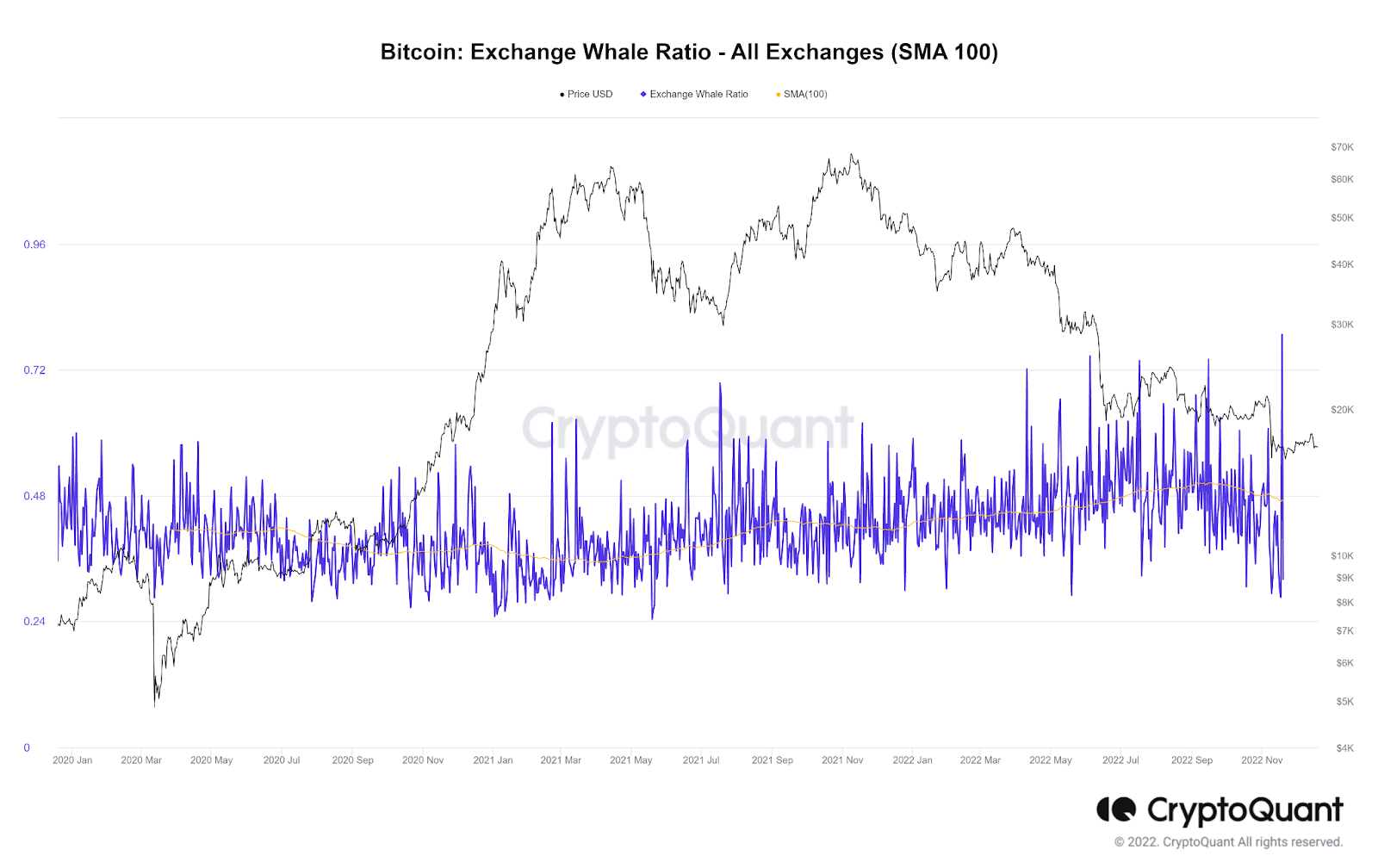