Even if the recovery takes longer than projected, Marcus believes that a new and better sector will emerge as a result.

According to one of the industry's most well-known figures, Bitcoin and cryptocurrency will need to "recover from the misuse of unscrupulous actors" until at least 2024.

David Marcus, CEO and creator of Bitcoin business Lightspark, disappointing bulls with his view for the future years in a blog post published on December 30. Less than two months after the FTX crash, the fallout continues to disrupt mood and price performance.

According to Marcus, who is well-known for his crypto roles at Meta and, before that, PayPal, bad actors have a lot to account for, and their ghosts will linger in the crypto business far beyond 2023.

While only addressing FTX once, he mentioned "unscrupulous players" dragging out market underperformance well beyond next year.

"It’ll take a couple of years for the market to recover from the abuse of unscrupulous players, and for responsible regulation to come through. Consumer trust is also going to take a few years to rebuild, but ultimately I believe this will prove to be a beneficial reset for legitimate industry players over the long run."

Its four-year halving cycles, which tend to promote growth in select years, may face difficulties. The year of the next halving, 2024, is increasingly expected to be a period of positive market activity, with some anticipating that the upswing would begin a year sooner — in Q2, 2023.

Even if the recovery takes longer than projected, Marcus believes that a new and better sector will emerge as a result.

Also Read: How Bitcoin and Inflation are related?

On the upside, BTC sees heavy resistance near $18,000, with bulls unable to break through. The Bollinger Bands breadth indicates minimal volatility, which might imply that Bitcoin price movement will stay modest for the foreseeable future until there is a trigger to launch a new rise.

The next support level, according to the Fibonacci retracement tool, is at $16,250, while a break above the resistance at $18,000 may see prices approach the psychological milestone of $20,000.

The Relative Strength Index (RSI) is now holding around the neutral 50 levels, indicating that market sentiment is neutral. BTC prices may continue to consolidate unless a clear breakout from the present trading range happens. 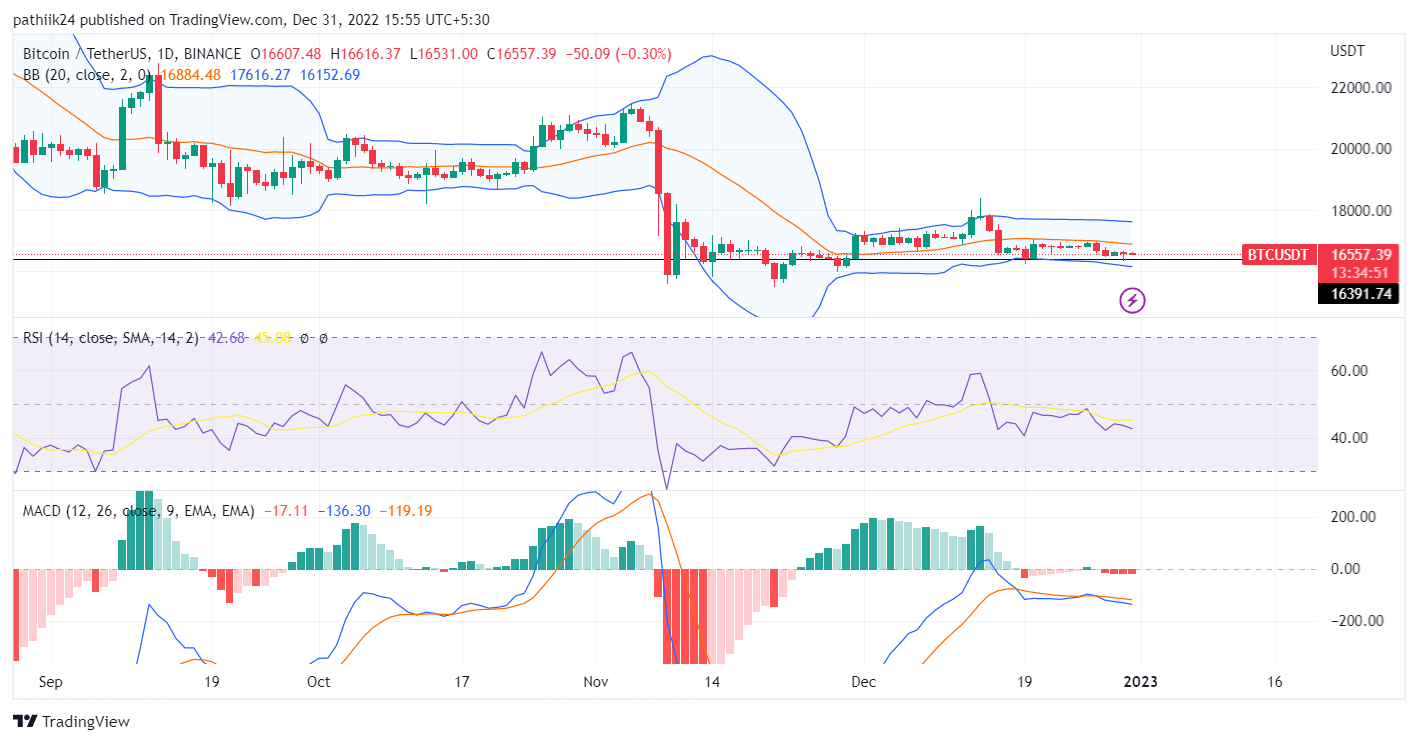 As the market remains dormant, the bulls have managed to keep the price of bitcoin over $16,500. The 4-hour chart reveals that BTC prices have been trading inside a narrow range, and if the bulls can break out of this, a new surge might form.

The 50-day moving average (MA) has been at a good support level near $16,000, while the 200-day MA is now resting around $16,624.86. The bulls must defend this critical support level or else BTC prices will continue to plummet.

A bullish crossover on the MACD may imply that the bulls have regained control of the market and may spark a new rally as the MACD line approaches crossing above the signal line. The RSI is now neutral at 50, and the Stochastic RSI is also negative, indicating that prices will likely continue range-bound. 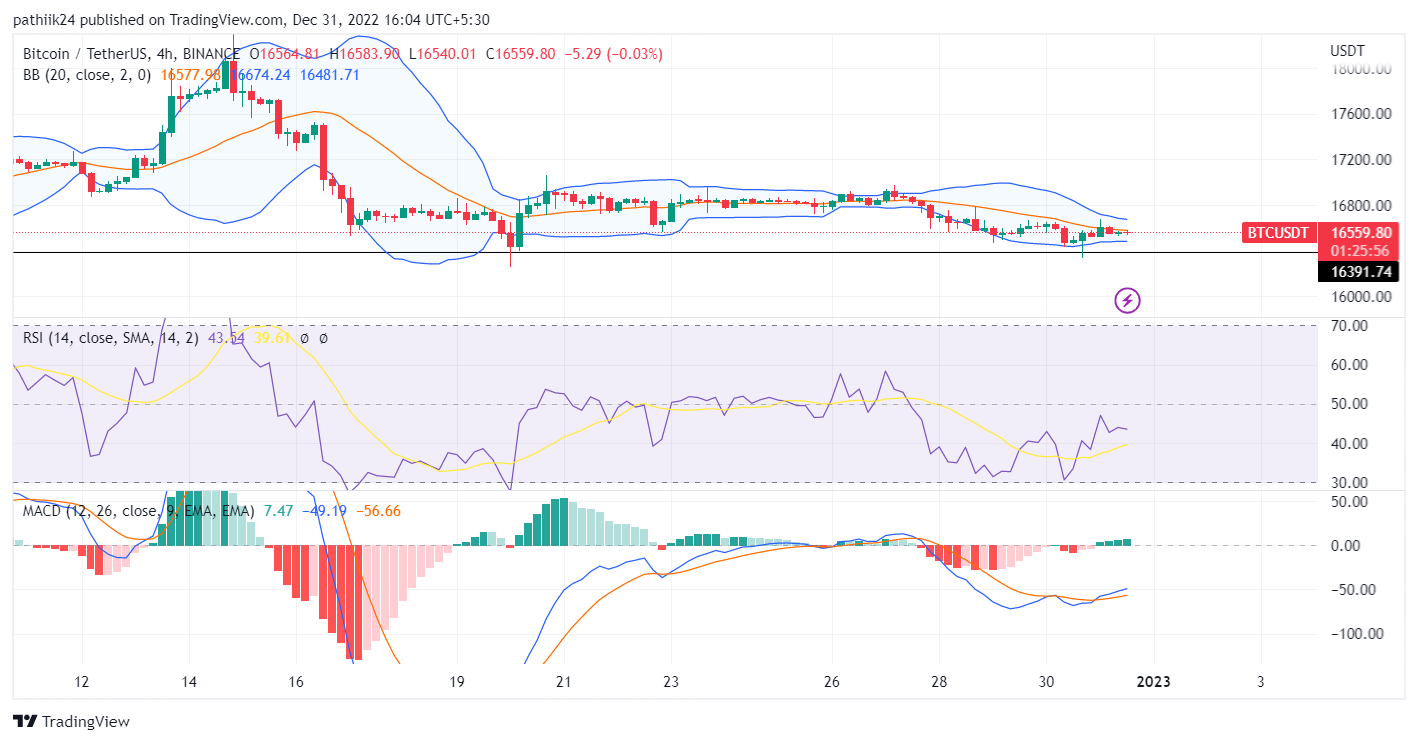 A statistic that identifies coins whose price at the time of the last move was lower than the current price is circulating supply in profit. Naturally, its historical lows are linked with the BTC price's macro lows. It's also worth noting that the quantity of supply in profit grows in subsequent market cycles as the supply of Bitcoin itself grows due to the process of mining new coins.

During bull markets, nearly all of the supply in circulation profits. In contrast, during bad markets, profit supply falls gradually until it reaches a low after each downturn. When we aggregate all of this metric's previous lows, we obtain a evident rising support line (red). 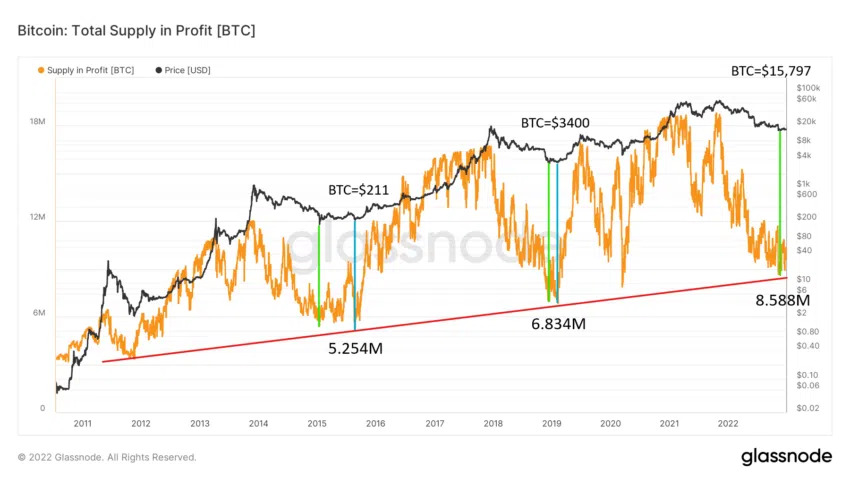 The Bitcoin network of miners earns money by validating blocks and getting compensated for their efforts. Bitcoins may be exchanged for fiat cash through cryptocurrency exchanges and used to make purchases from merchants and retailers who accept them.

What is the stock-to-flow of Bitcoin?

Stock-to-flow models quantify new supply about the current supply. The stock-to-flow ratio of Bitcoin is used by investors to forecast future currency prices. Unlike many other assets, Bitcoin's new supply remains constant regardless of the asset's price.

Is Bitcoin a good investment?

Bitcoin, the most valuable cryptocurrency by market capitalization, is a high-risk investment with extreme volatility. It should be considered only if you have a high-risk tolerance, are financially secure, and can afford to lose any money you put into it.

Many nations recognize bitcoins as a type of currency, but only a handful considers them legal tender. China, Algeria, Bangladesh, Egypt, Iraq, Morocco, Nepal, Qatar, and Tunisia all have outright prohibitions.

Why Do Bitcoin Price Changes Impact Other Coins?

Because of its pioneer role, many investors regard it as the crypto market's reserve, and other currencies rely on its value to remain high.