On or around August 3, 2023, the cryptocurrency network Litecoin (LTC) will suffer a block reward halving in about 202 days.

Litecoin, the 14th-largest cryptocurrency today, is gearing up for a halving of block rewards in 202 days. Aside from Dash's forthcoming halving in 158 days, it will be the first major proof-of-work (PoW) cryptocurrency to have a reward halving. Dash's reduction, on the other hand, is not halved, as the price will be lowered from 2.763 Dash to 2.566 Dash. Litecoin's block halving, like Bitcoin's, reduces the payout in half (by 50%), down from 12.5 LTC to 6.25 LTC.

While litecoin (LTC) currently has the 14th highest market capitalization, it was once a top-ten cryptocurrency competitor in the early days of the crypto sector. LTC's network differs greatly from Bitcoin's (BTC) in that there are more coins in circulation - there are currently more than 72 million LTC in circulation. LTC, on the other hand, is approaching its maximum supply of 84 million. Bitcoin blocks are typically around 10 minutes long, however, LTC blocks are substantially faster at 2.5 minutes.

According to two-week market figures, litecoin (LTC) has gained 29% against the US dollar, yet the cryptocurrency is down 79% from its all-time high. On May 10, 2021, LTC reached an all-time high of roughly $410 per unit. Aside from the supply differential between LTC and Bitcoin (BTC), Litecoin's proof-of-work algorithm, Scrypt, differs from SHA-256. The impending LTC halving will be the third block reward reduction for Litecoin since its establishment.

Related Read: Litecoin Moving Ahead as Market FUD is Slowing Down

Also Read: How does Litecoin work?

According to the one-day Litecoin price analysis, the positive trend has been ongoing for the past 24 hours. The cryptocurrency broke the $84 mark the day before, and the bulls are already on their approach to their next target. The short-term moving line is continuously declining, and the price has finally settled around $80.62. Following the most recent uptick, when the coin gained approximately 0.54 percent in value today, the price crossed its moving average (MA) value of $77.68, but lately retreated below the MA.

As the bears were outnumbering the market trends in the previous weeks, the SMA 50 curve is still higher than the SMA 20 curve. When we look at the Bollinger bands indicator, we see that the crypto pair has strong volatility, with an upper value of $83.08 and a lower value of $62.49. The Relative Strength Index (RSI) score has increased to index 60.08 following the bullish return; previously, the RSI was hovering over the underbought zone's borderline. 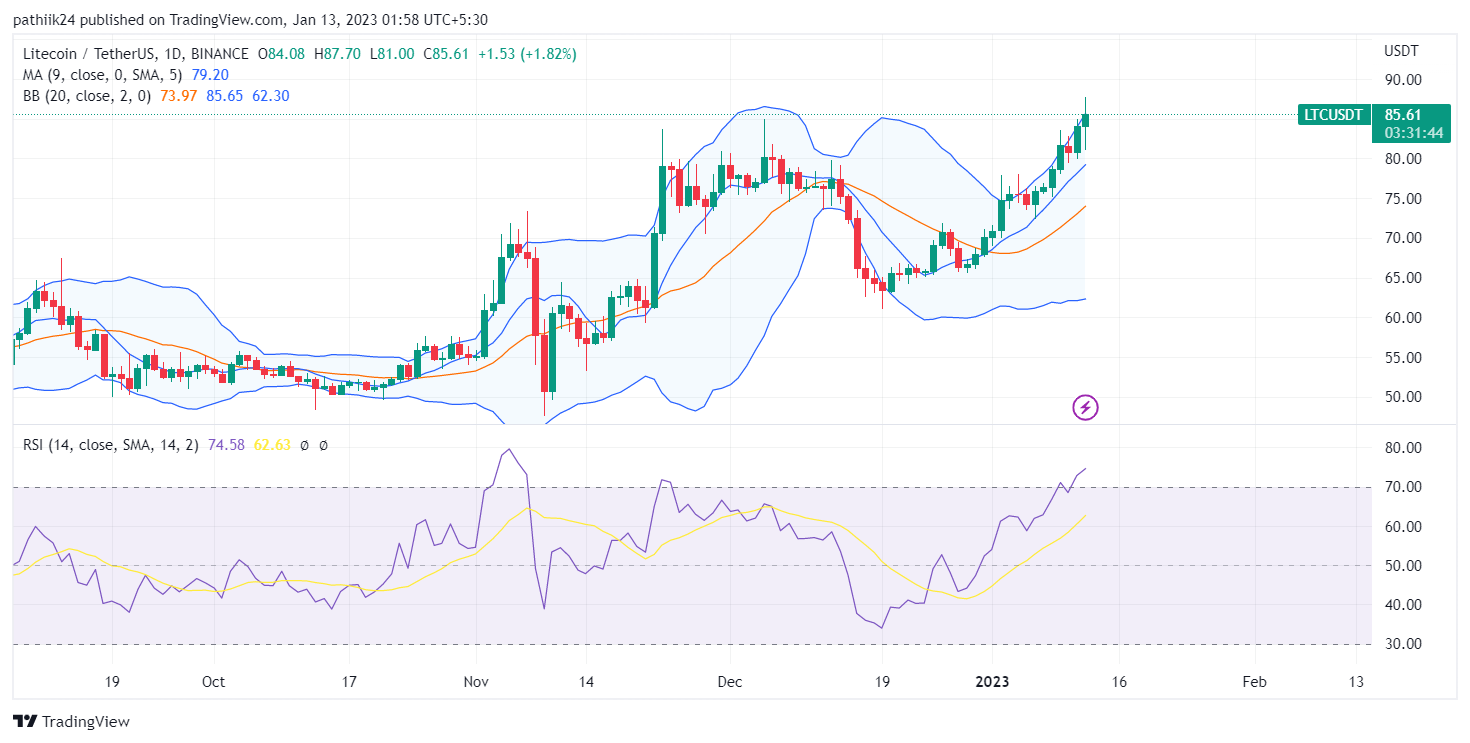 The hourly price chart for Litecoin price analysis is currently bullish, as the price has increased significantly in the last several hours. However, unfavorable price movement was observed throughout the day. The market trend has shifted since selling pressure is no longer present. If the bulls continue steady, a further increase is possible. The moving average value is $81.24 higher than the current price level.

The market volatility is progressively increasing as the coin approaches its upper Bollinger band value of $84.45, while the lower band is located at $77.23. The RSI value has risen, and it is now nearing the overbought zone with a score of 62.95. Further gains in LTC/USD value are possible if purchasers maintain their current uptrend and there are no major bearish collapses in the market. 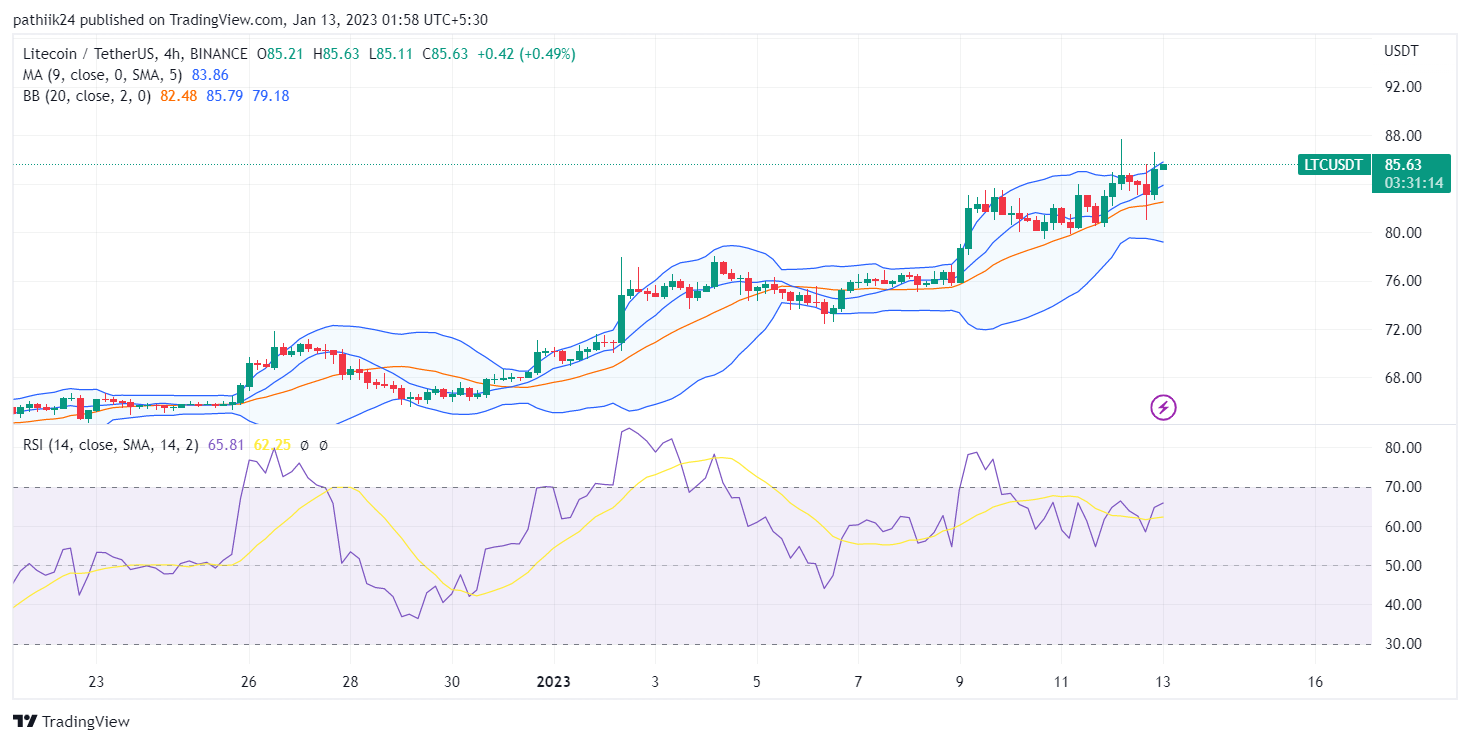 Is Litecoin still a good investment?

Litecoin does, in fact, have a bright future in the cryptocurrency industry if you believe the majority of the experts. Despite not ranking among the top 10 most traded or popular cryptocurrencies, it is universally accepted and simple to trade.

Is Litecoin better than Bitcoin?

Can I get rich off Litecoin?

There are no hard and fast rules when it comes to cryptocurrency. Therefore, even if Litecoin appears to be a potential investment vehicle, there is no assurance that it will make you wealthy. But if you play your cards well and know what you're doing, you may stand to gain significantly.