No Bitcoin Rally on this Christmas, Investors Hoping for the Next Year

Bitcoin's price continues to show minimal daily swings as it consolidates inside a narrow range with little volatility.

The year 2022 comes to a close, and Bitcoin is continuing its sideways trading pattern following a difficult year characterised by negative circumstances. Despite Bitcoin's pullback, the asset price movement is consistent with a historical pattern that might provide the groundwork for the flagship cryptocurrency to hit new highs.

In this vein, prominent crypto expert Vince Prince of TradingView noted that Bitcoin had created the 'Merry Christmas Cycle' in 2022, a pattern that has developed during the previous three Christmases.

According to Vince's data, Bitcoin has always reached historic highs over the Christmas season. Furthermore, he added that Bitcoin reached numerous new all-time highs each year on Christmas Eve.

With Bitcoin's current price ranking among the yearly lows, analysts claim that, according to the cycle, the first cryptocurrency has always produced new bottoms that conclude the bear market and begin the next Christmas Cycle.

Indeed, if the current trend continues, Bitcoin will certainly reach $1.8 million by Christmas 2026. If the price objective is met, Bitcoin will increase by about 10,614% from its current price.

Quick Read: What is Bitcoin Halving?

Despite the continued battle with the 50-day MA, price momentum is not encouraging, as overall activity and demand are modest. Before launching a bullish rise, the market must regain the trust of its participants.

In this context, the MACD indicator comes to mind: This indicator is going to turn green, indicating the start of a short-term bullish trend that might help BTC break above the 50-day moving average. 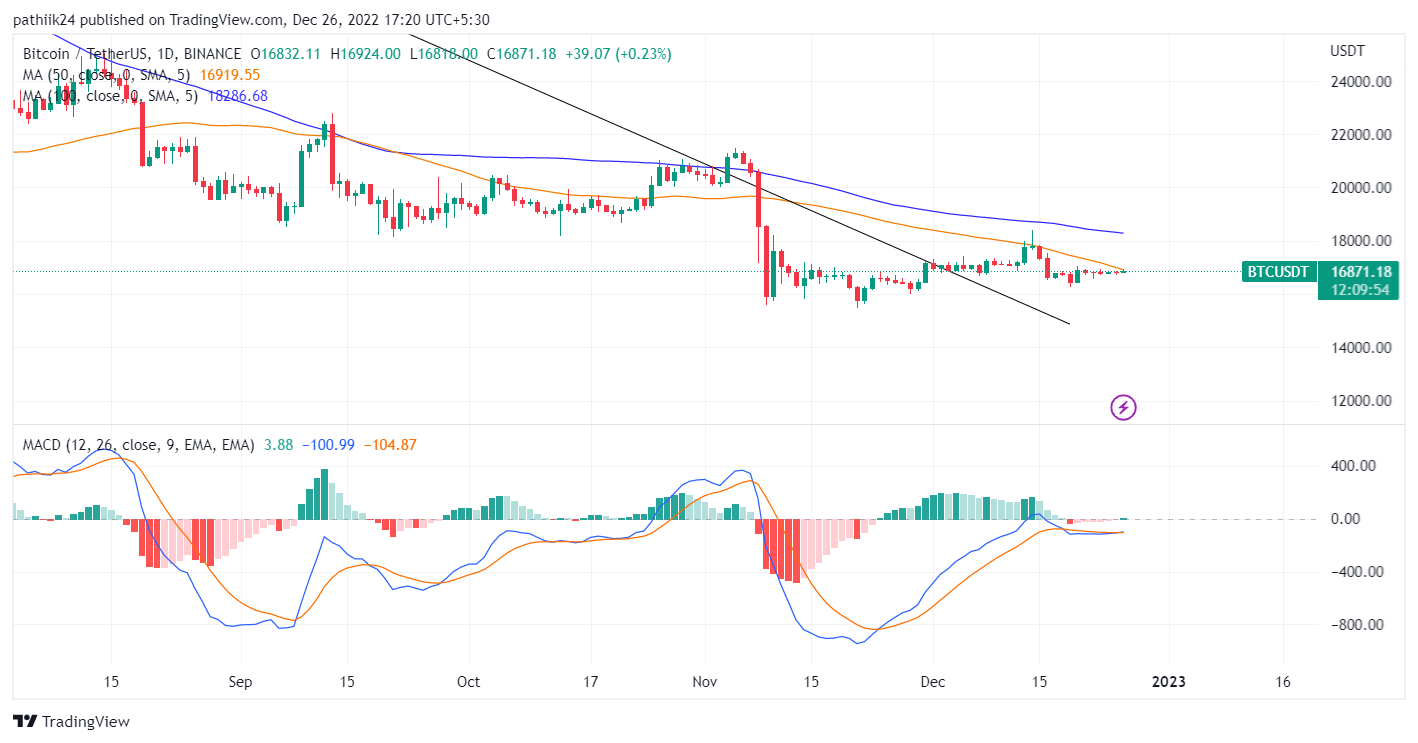 The present declining activity and low volatility are more visible on the 4 hours chart below. After a protracted downturn, the price has recovered from the $16K level and stabilises below the $17K barrier. However, the major battle for Bitcoin is now beyond this point of convergence.

If the price rises over the stated level, the major hurdles to the $18K area will be a pullback to the 0.618 Fib level and the broken trendline. 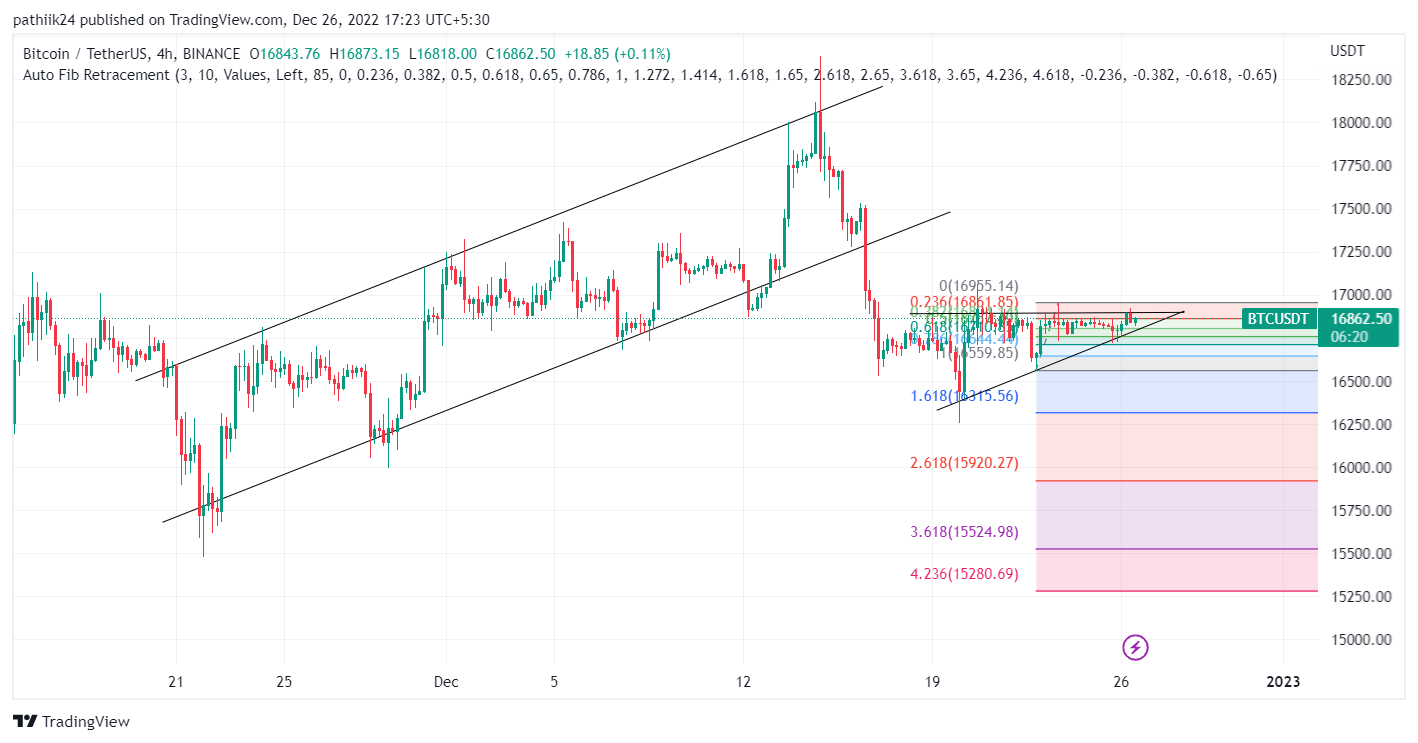 The 14-day moving average line of the Miner to Exchange Flow statistic is shown alongside Bitcoin's price in the chart below. The entire quantity of coins sent from miners to exchanges is represented by this measure.

A spike in the indicator implies that miners may be under pressure to sell to meet their expenditures during the negative period of the market. The price dropped dramatically each time the measure spiked, as shown in the figure.

However, the statistic has lately dropped to a new multi-year low. This shows that the miners' selling pressure has reduced, which might be interpreted as a bullish indication of the price because miners represent a critical cohort among market players. 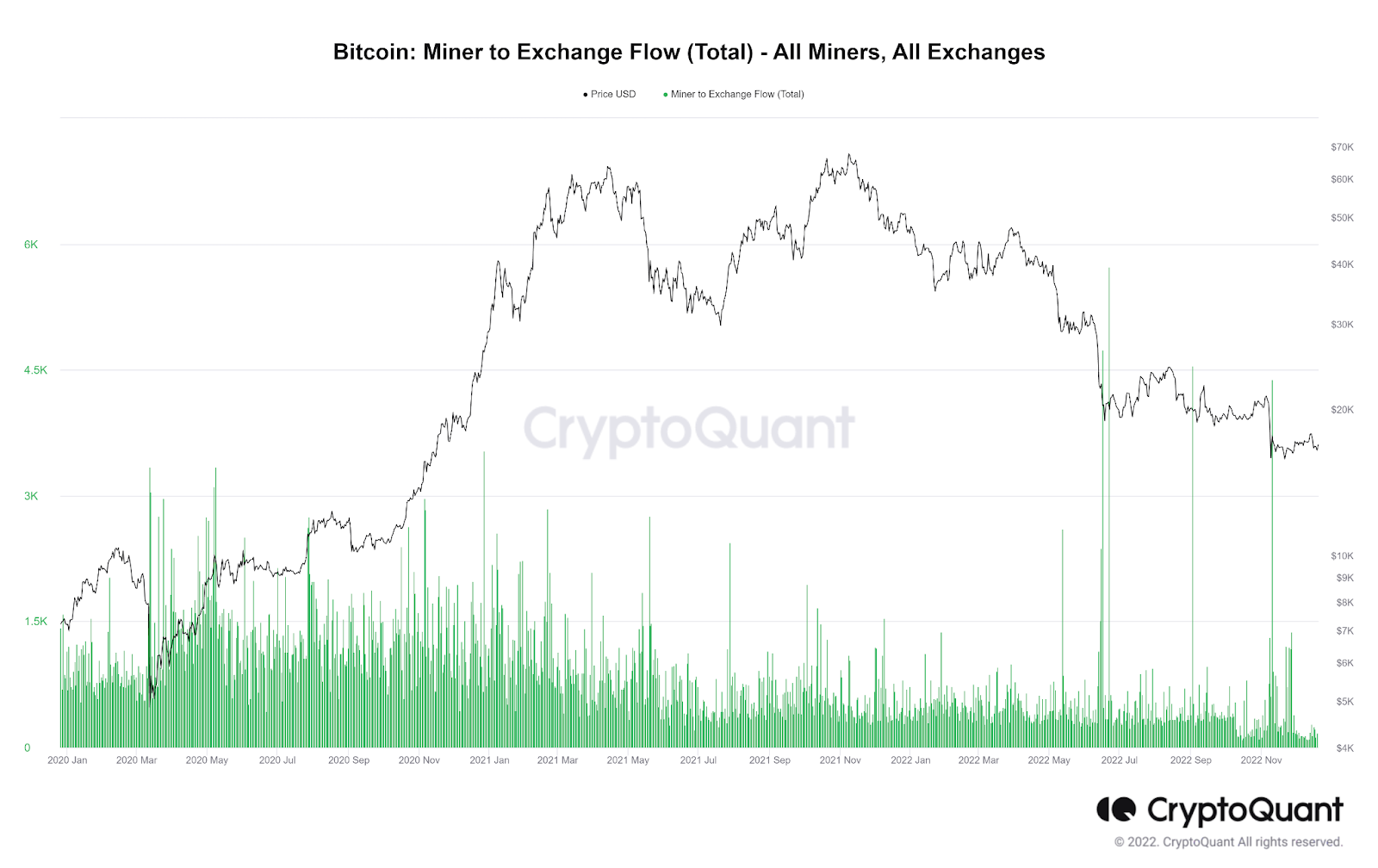 Notably, Bitcoin has been influenced by macroeconomic variables, a position exacerbated by the collapse of the FTX crypto exchange as investors await a probable price bottom. According to Finbold research, historical analysis suggests to a likely Bitcoin decline to $9,000. Notably, the position served as the basis for Bitcoin's most recent all-time high of $69,000.

Data from previous market movements suggest that Bitcoin may be due for another rise over the next three years. When looking at Bitcoin's previous moves, a pattern emerges of a year when the asset reached its all-time high (ATH) followed by a bear market year.

Meanwhile, investors will be looking for a Bitcoin surge as the commodity strives to become digital gold. Surprisingly, in the aftermath of Bitcoin's last surge, crypto sceptic Peter Schiff confessed that investor interest in gold had waned as the cryptocurrency technology gained centre stage.

Can BTC ever rise again?

The next Bitcoin halving is scheduled in early 2024, and as usage rises and the halving approaches, a fresh bull run is a forecast, which is why our Bitcoin price prediction for 2023 thinks the coin might hit new highs and be worth as much as $75,000 by this point.

Will all Bitcoins eventually be lost?

According to Glassnode data, around 10% of the currency Bitcoin supply, or 1,857,721 Bitcoins, may never be discovered. According to some sources, it may be as high as 25%. That is billions of dollars in value that will be unavailable throughout perpetuity, lowering the cryptocurrency's circulation supply.