Unless they prohibit fee-free marketplaces, creator fees will be optional for new collections.

OpenSea, the leading non-fungible token (NFT) marketplace, stated Wednesday that it is standing with artists and would continue to impose royalties on the platform.

The platform posted a Twitter thread clarifying its position on continuing to support creators by enforcing royalties. It stated that the average proportion of fees earned by the top 20 NFT collections has decreased from 77% to 56% since October 12th.

At the time, the marketplace stated that it was exploring enforcing off-chain fees for "some subsets of collections," "allowing optional creator fees," and "collaborating with other on-chain enforcement options for creators."

The news drew strong criticism from the community, with many encouraging OpenSea to explain its position and pointing out that the language was ambiguous. In contrast, others criticised the "optional creator fee" approach.

Several NFT creators, also including Bobby Kim, co-founder of The Hundreds, said on Nov. 9 that they had opted to cancel the launch of their impending nonfungible token (NFT) collection on OpenSea, stating that they were "waiting to see if OpenSea will take a position to safeguard creator royalties for current collections."

"Unfortunately," he remarked, "that announcement has not arrived in time."

On Nov. 8, the founders of Bored Ape Yacht Club (BAYC), including Wylie Aronow, Greg Solano, and Kerem Atalay, weighed in on the debate in a blog post, stating that the move from OpenSea was "not great" and demonstrates the company's intent to "move with the rest of the herd and remove creator royalties for legacy collections from their platform."

There has also been vocal community opposition, pressing OpenSea to explain its position. On Monday, 19-year-old NFT artist Victor Langlois, also known as FEWOCiOUS, posted a message to OpenSea on Twitter, pleading with the platform to support creators.

The move by OpenSea comes at a time when top NFT collectors are increasingly selling their collections on exchanges that allow fee-free trading in order to maximize their revenues. This has reduced OpenSea's earnings, resulting from a 2.5% fee on trade.

The weekly NFT volumes have fallen by more than 90% from their high in the first quarter. 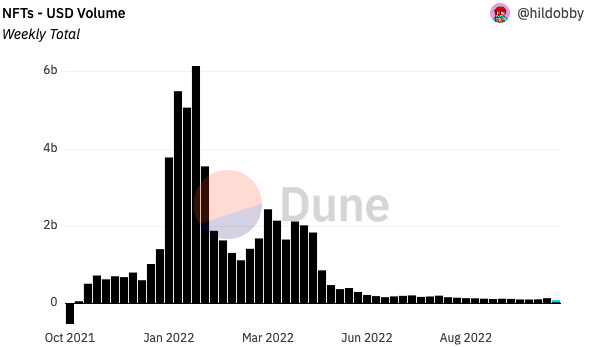