Polkadot Takes Another Jump, Could Surprise Analyst for a Long Run

Recent developments in Polkadot parachain resulted in increased activity in the network.

Polkadot remains stable in this Q3 haze maintaining stability between its network activity and market sentiment. The upcoming Polkadot WEB summit is going to be another level craze as the network protocol is deciding to collaborate with more upcoming projects to boost the WEB 3.0 ecosystem.

In a series of Twitter threads, the network shared its Polkadot roundup. They also mentioned the upcoming projects in the tweets and how the DOT universe will add more to the DOT network.

Since attaining an all-time high price of $55.09 in November 2021, DOT has fallen beneath a descending resistance line. It has been one of the biggest losers in the crypto market during this time, falling by 88%.

The Polkadot price bounced at the $23 horizontal support area in mid of April 2022 - July 2022, forming a long lower wick in the process. However, DOT was unable to maintain this upward trend, and a breakdown occurred in September. 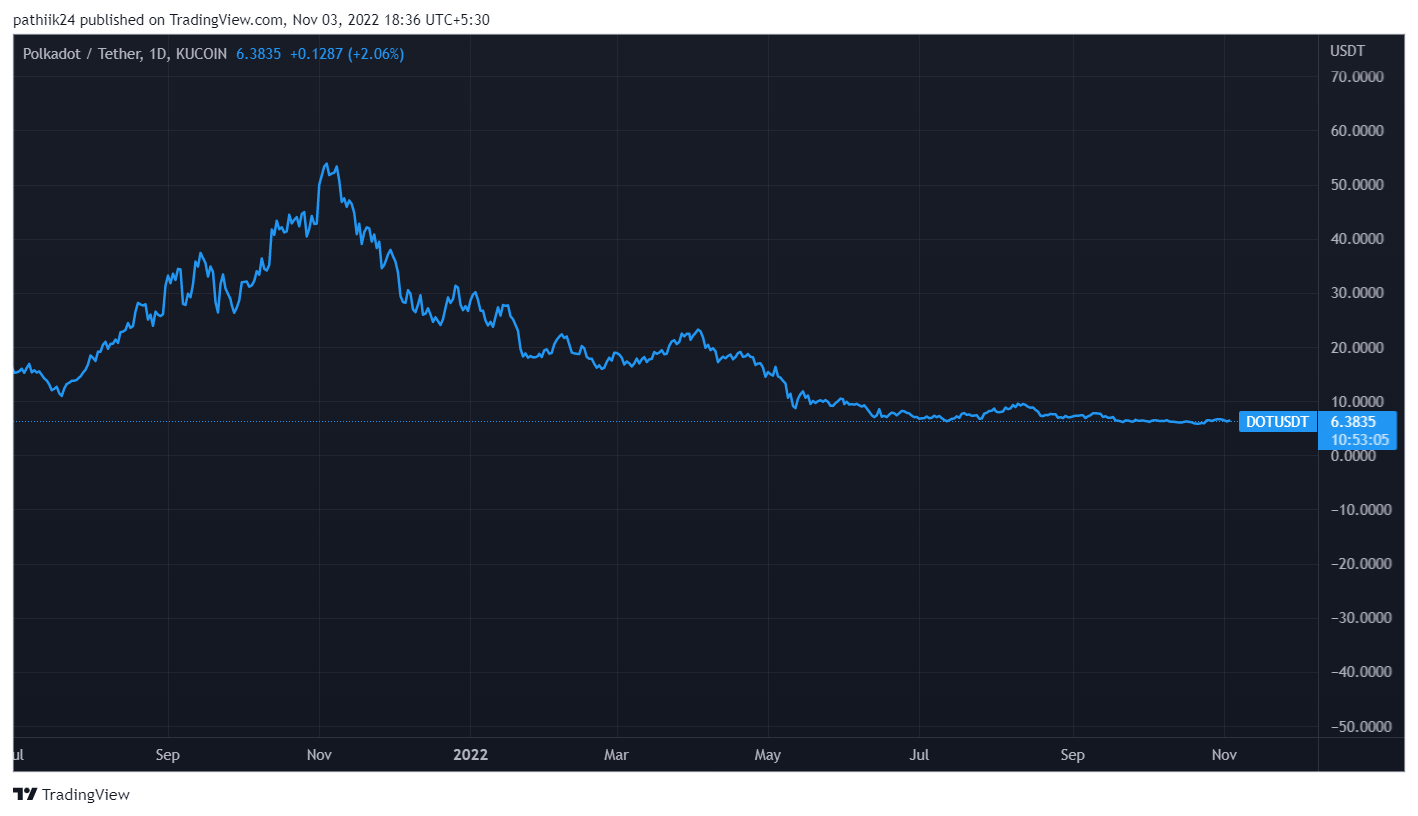 The price is currently validating the $6.35 area as resistance. The area's significance is increased because it also coincides with the descending resistance line.

While the weekly RSI has produced significant bullish divergence, it has yet to break away from its original bearish divergence trend line. Furthermore, the candlestick from last week represented the highest proportion rise since July. 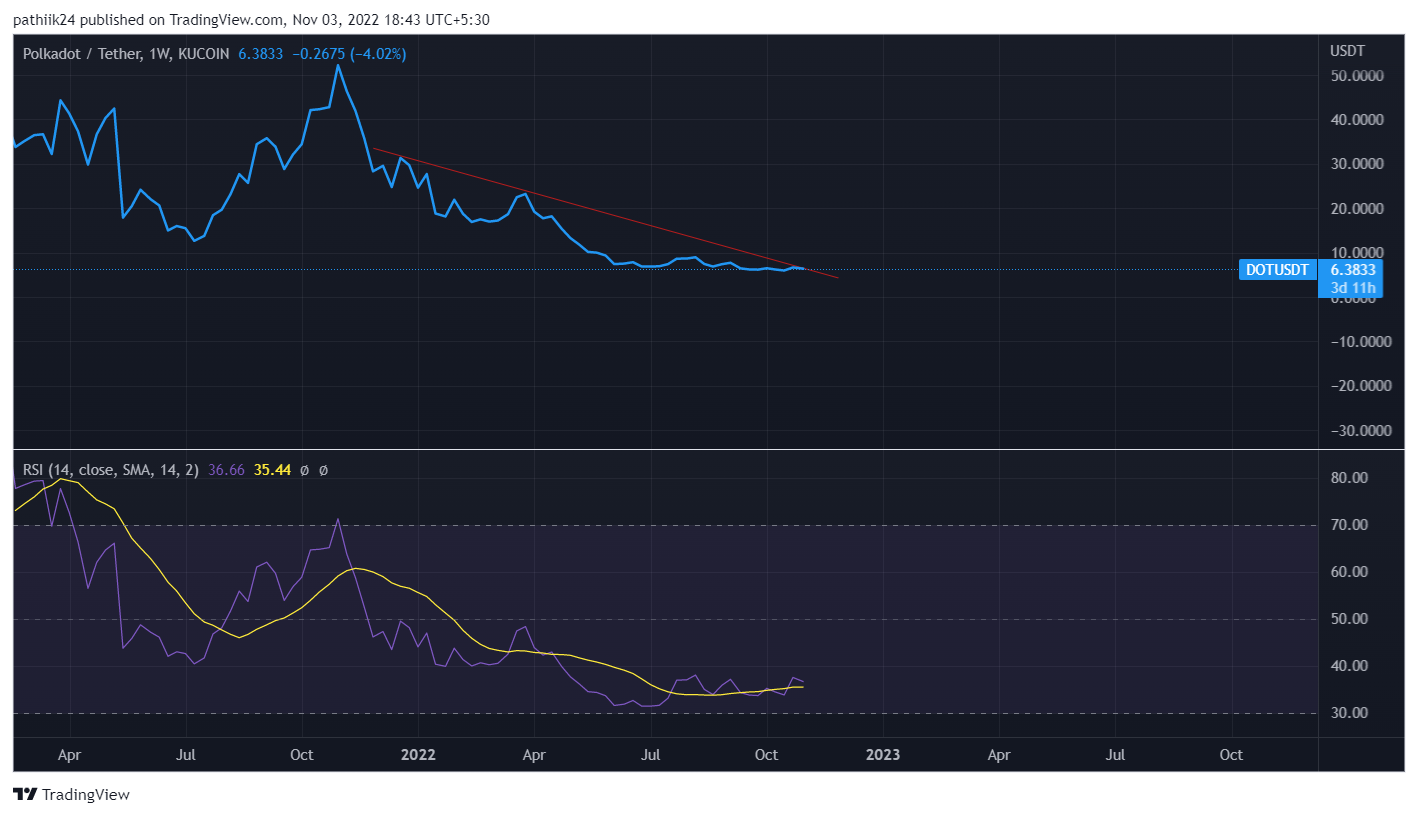 As a result, whether the Polkadot price breaks out of the line/area or is rejected will most likely determine the future trend. The weekly time frame does not currently provide an accurate DOT price prediction.

Since the decline in July, the development activity rose exponentially high from 39.7 to 66.17, a subsequent increase of 71 % at the time of publishing.

Moreover, the trading volume has been declining since May 2022 which could be a negative sign as investor activities are decreasing each cycle. The market capitalisation also gets hampered due to the downfalling trading volume.

A glance at DOT's price action reveals yet another reason why the bulls are so eager to return. During the end-of-October rally, the cryptocurrency gained 17% after bouncing back from October lows.

A small sell-off is common after a large gain, and DOT's drop in the last three days reflects this expectation. However, the downside retreated to the 50-day moving average, which frequently serves as a pivot point.

The next biggest hurdle for DOT’s bull run could be its next resistance which is at $9.0  (Red Line). If Dot goes beyond it this resistance, it could follow an uptrend for a more bullish candle. However, due to some factors including the aforementioned, DOT’s Support level is at $3.9(Yellow Line) if in any way possible if DOT goes beneath it, a bearish trend could be expected. 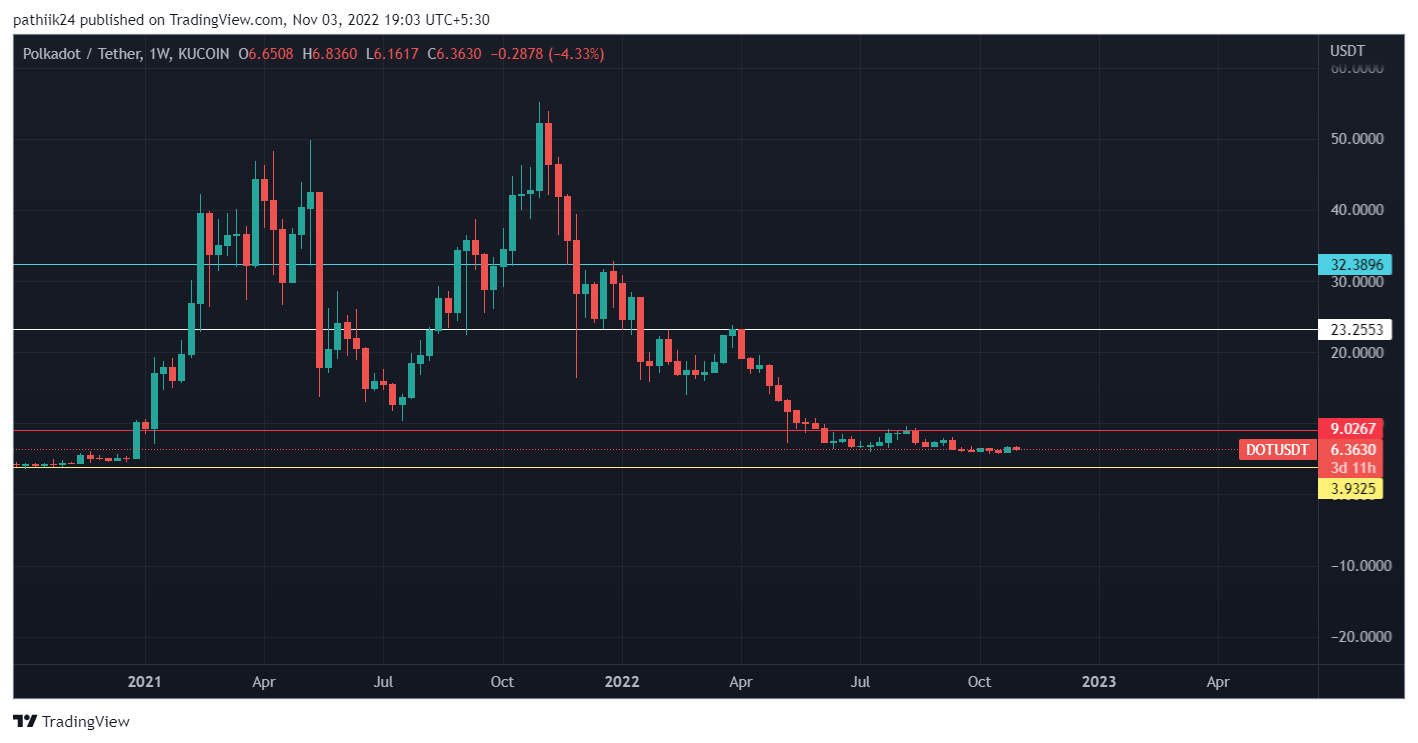