As the name indicates, Proof of History (PoH) provides proof of historical events. Solana's PoH technology allows "timestamps" to be directly recorded into the blockchain.

What is Proof of History?

Proof of History (PoH) is a method for adding time to the blockchain to lessen the burden on network nodes when processing blocks. In a classic blockchain, reaching an agreement on when a block was mined is equally as crucial as reaching an agreement on the transactions in that block. It is critical because timestamping notifies the network (and any observer) that transactions occurred in a specified sequence.

Proof of History is a computation sequence that may be used to cryptographically prove the passage of time between two occurrences. It employs a cryptographically safe function that is built in such a way that the output cannot be anticipated from the input and must be entirely performed to produce the output.

The function is executed in sequence on a single core, with the previous output serving as the current input and a periodic record of the current output and the number of times it has been called. External computers can then recompute and verify the result in parallel by examining each sequence segment on a different core. Data can be timestamped into this sequence by attaching it (or a hash of some data) to the function's state.

The recording of the state, index, and data as they were appended to the sequences offers a timestamp that can ensure that the data was created before the next hash in the series was constructed.

How Does it Work?

This technique of timestamping is made possible by an SHA-256, sequential-hashing verified delay function (VDF). It works by taking the outcome of a transaction and using it as the input for the next hash, allowing everyone to see which event occurred in a certain sequence. PoH significantly minimizes the processing weight of the blockchain, making it faster and more energy-efficient than many of his peers because the VDFs can only be solved by a single CPU score. 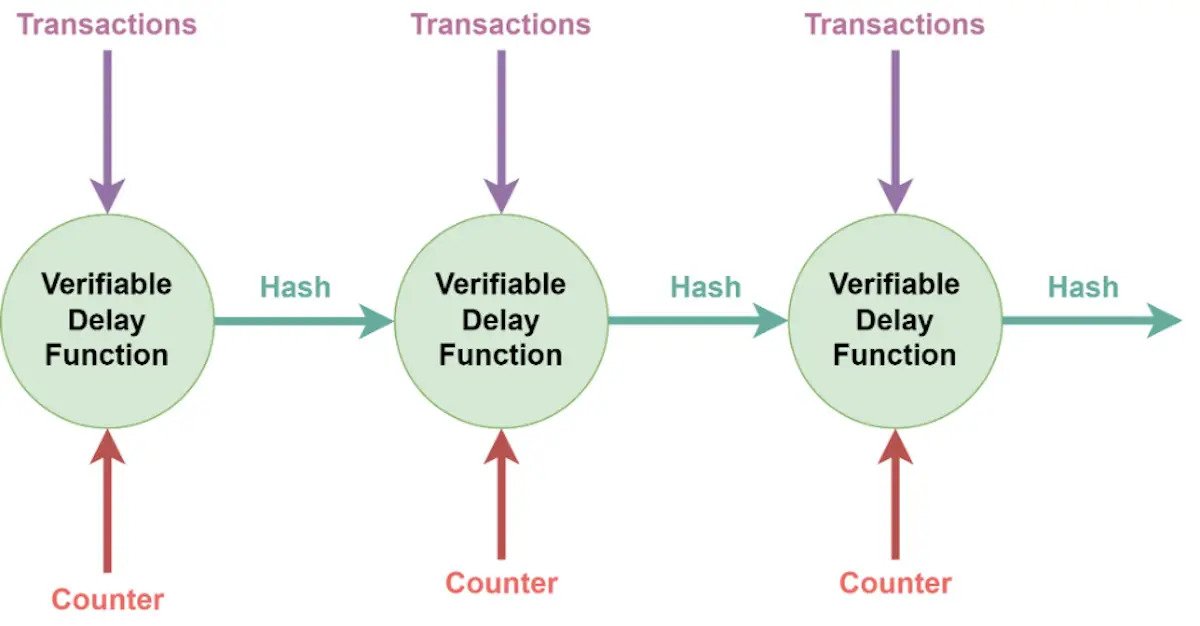 PoH has yet to be evaluated on a broad scale because it is only used by Solana.

When you take a photograph of a newspaper, you are establishing proof that your image was taken after the newspaper was published, or that you have some control over what the News publications publish. You may use Proof of History to construct a historical record that demonstrates an event that occurred at a given point in time.

Significance of Proof of History

PoH enables network fault tolerance by offering a robust method for eventual consistency, even in the face of a huge network split (or fork). Because nodes can rely on the system structure to ensure transaction sequencing, they may dedicate more resources to quickly processing blocks and entering valid blocks into the ledger.

Each time a validator votes on a fork, it is limited to a set number of hashes called a slot. The present network setup takes roughly 400 milliseconds for one slot (ms). Every 400ms, the network has a possible rollback point, but each subsequent vote increases the amount of time it must wait until it may unroll that vote. To summarize, secondary votes make it far more difficult to reverse transactions in a certain slot.

As a result, a block with a large number of votes has a stronger chance of remaining in the chain permanently. Note: Solana is the only known protocol that uses Proof of History consensus.

Low transaction prices: Solana has lower transaction fees than competing networks like as Ethereum. As a result, Solana is a great option for frequent transactions and money transfers.

Scalability: Transactions on the Solana network are extremely fast. As a result, the whole picture becomes more scalable.

Proof of History is riddled with problems. For example, because this strategy has never been tested on a large scale, we don't know if it works properly. Furthermore, several weaknesses and attacks in Solana have already been uncovered, some of which were triggered in part by Proof of History. As a result, we are unsure if Proof of History is a secure consensus mechanism.

Proof-of-History has a bright future ahead of it as the ecosystem attracts more and more developers. And it is absolutely worthwhile to monitor the protocol's project as it develops.