Proof of work (PoW) is a decentralized consensus technique that compels network participants to invest effort in solving an arbitrary mathematical puzzle in order to avoid system gaming.

To validate crypto transactions without any third-party intervention in the blockchain, there must be a system that could verify whether a transaction had taken place or not, Proof-of-work consensus was made.

The process of creating fresh blocks of transactions on a cryptocurrency's blockchain is known as proof of work (PoW). In this scenario, the task consists of creating a hash (a lengthy string of characters) that matches the desired hash for the current block. This grants the cryptocurrency miner the ability to add that block to the blockchain and earn rewards.

Let’s look at PoW in detail.

What is Proof of Work Consensus?

Most cryptocurrencies in use today use Proof of Work consensus as their preferred consensus method. To validate the transaction and add a new block to the blockchain, the algorithm is applied.

Cynthia Dwork and Moni Naor initially introduced the concept of Proof of Work (PoW) in 1993, and Satoshi Nakamoto later used it in a Bitcoin paper in 2008. Markus Jakobsson and Ari Juels used the phrase "evidence of work" in a book in 1999.

PoW is now used by cryptocurrencies like Bitcoin, Litecoin, and DOGEcoin.

How does the Proof of Work Consensus Work?

To earn the authority to mine a block of cryptocurrency, miners must provide proof of work in the shortest amount of time possible. Solving challenging math problems is the "work," and the answer to the problem is the "proof."

Blockchains, which are open ledgers made up of transactional blocks, are present in every cryptocurrency. Each block of transactions in a proof-of-work cryptocurrency has a unique hash. A crypto miner must provide a target hash that is less than or equal to the block's hash for the block to be confirmed. While computing the hash, Hashrate is produced. Hashrate simply measures the computational power of the blockchain.

Miners need computing-intensive mining equipment to do this. Being the first miner with the target hash will allow you to update the blockchain and collect cryptocurrency incentives.

Finding the desired hash is challenging, but confirming it is straightforward, which is why proof of work in cryptocurrencies works effectively. The procedure is challenging enough to shield transaction records from tampering. At the same time, it is simple for other miners to verify a target hash once it is located. 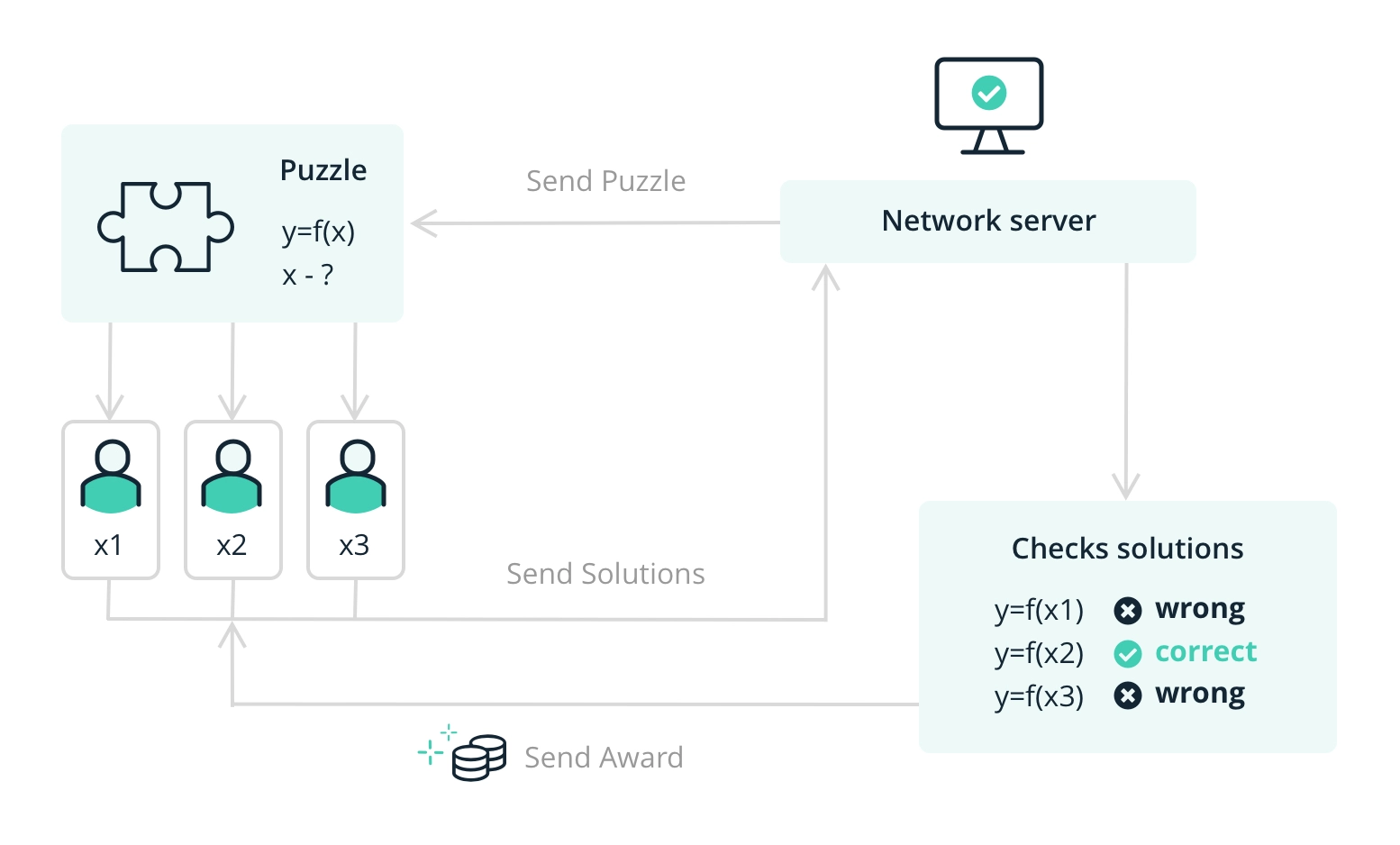 For an instance, suppose you’re in the mid of a Maths exam and solving a complex multiplication of a 4-digit number. If you get the answer correctly, you will get marks and the steps you used to get the solution will be remembered by you.

In the above example, things to consider:

Marks you get = Rewards

And, Your memory = Blockchain

How Proof of Work is Implemented on Bitcoin?

When a Bitcoin transaction takes place, it is subject to security checking before being aggregated into a block that has to be mined. The block's hash is then produced via Bitcoin's proof-of-work process. The SHA-256 encryption standard (an algorithm) used by Bitcoin always produces hashes of 64 characters.

Miners compete to produce a target hash that is lower than the block hash first. The most recent block of transactions will be added to the blockchain for Bitcoin by the winner. In addition, they get bitcoin incentives in the form of transaction fees and freshly created coins. The total number of coins in circulation for Bitcoin is limited to 21 million, but even beyond that, miners will still be compensated with transaction fees.

A new block is expected to be added by the proof-of-work method employed by Bitcoin every 10 minutes. It does this by altering the difficulty of mining Bitcoin by the rate at which miners are adding blocks. The difficulty of hash computations increases if mining proceeds too rapidly and become less complex if it moves too slowly.

As Bitcoin is certainly the most popular and the first crypto to utilise Proof of work, we will take Bitcoin’s facts and figures to get a better understanding of PoW consensus.

Currently, the winning miner receives 6.25 bitcoins for successfully mining a block in the bitcoin network.

Every four years, the proportion of bitcoins acquired is cut in half. Therefore, the following bitcoin amount reduction is expected around 2024 (with the current rate and growth).

The time it takes to mine a new block will inevitably decrease as there are more miners. As a result, the new blocks are discovered more quickly.

The amount of energy needed to maintain network security is a significant criticism of proof-of-work. Ethereum's proof-of-work system required a lot of energy to guarantee security and decentralization. Ethereum miners were using roughly 70 TWh annually before the move to proof-of-stake (about the same as the Czech Republic - according to digiconomist on 18 July 2022).

Sustainability: To support mining operations, proof of work needs a lot of electricity, which is not a good practice for sustainability.

Require costly hardware: It is optional to invest in costly mining rigs. Buying a cluster of rigs could cost you a hefty sum of money while increasing the chances of solving hash and getting the reward.

Risks Associated with Proof of Work

The 51% Attack: If a governing entity holds 51% or more of the network's nodes, the entity can corrupt the blockchain by acquiring control of the majority of the network.

Time-consuming: Miners must analyze a large number of nonce values to solve the puzzle that must be solved to mine the block, which is a time-consuming operation.

Consumption of resources: Miners need a lot of computational power to solve difficult mathematical challenges. It results in the loss of valuable resources (money, energy, space, hardware). By the end of 2018, it is projected that 0.3% of the world's power would be consumed on transaction verification.

According to data, the threat of quantum computing may arise within the next twenty years. Cryptologists believe bitcoin will mature before it becomes a legitimate worry. Bitcoin will have developed a more sophisticated mechanism capable of managing these risks.

Other Proof of Work Coins

Proof of work was the primary consensus mechanism for early cryptocurrencies that required a safe, decentralized method of processing transactions. Although proof of stake has recently evolved as a less energy-intensive alternative, many large currencies continue to employ proof of work.