Over the last seven days, a large amount of Shiba Inu meme coins – a total of 516,462,035 — have been removed from circulation.

Shiba Inu cryptocurrency team has announced an amazing event with the Bugatti Group. Both sides have remained tight-lipped about what customers may expect, but a promotional film reveals a range of Shiba Inu-themed handbags.

The Bugatti Group is a firm that specialises in the design, manufacture, and sale of luggage, purses, briefcases, and accessories. It has been in business since the 1940s, specialising in "extraordinary designs and outstanding materials."

Bugatti Group Genesis NFT Collection was introduced as part of the initiative, and owners receive privileges such as access to exclusive social media channels as well as discounts on future drops and purchases.

Shiba Inu has undoubtedly seen tremendous success since its inception in 2020, and this alliance demonstrates how serious it is about building a name for itself in the realm of NFTs and cryptocurrencies. Despite the large price fall, demand for the coin shows no signs of abating anytime soon. SHIB has fallen more than 90% from its all-time high.

Shiba Inu began the year on a high note, but the setup was sluggish owing to erratic market activity. The price rose further, reaching a three-week high of $0.000009 on the opening day of the week.

Following a 4.8% daily gain, the Dogecoin Killer - SHIBA - pushes higher and looks for more gains. If the asset continues to show signs of strength, it may also reach the November 2022 drop level of $0.0000093.

This recovery pattern, however, is identical to that of June and October 2022, when the price surged to $0.000018 and $0.000015 before falling. If this pattern holds, the price may retest the resistance trend line. 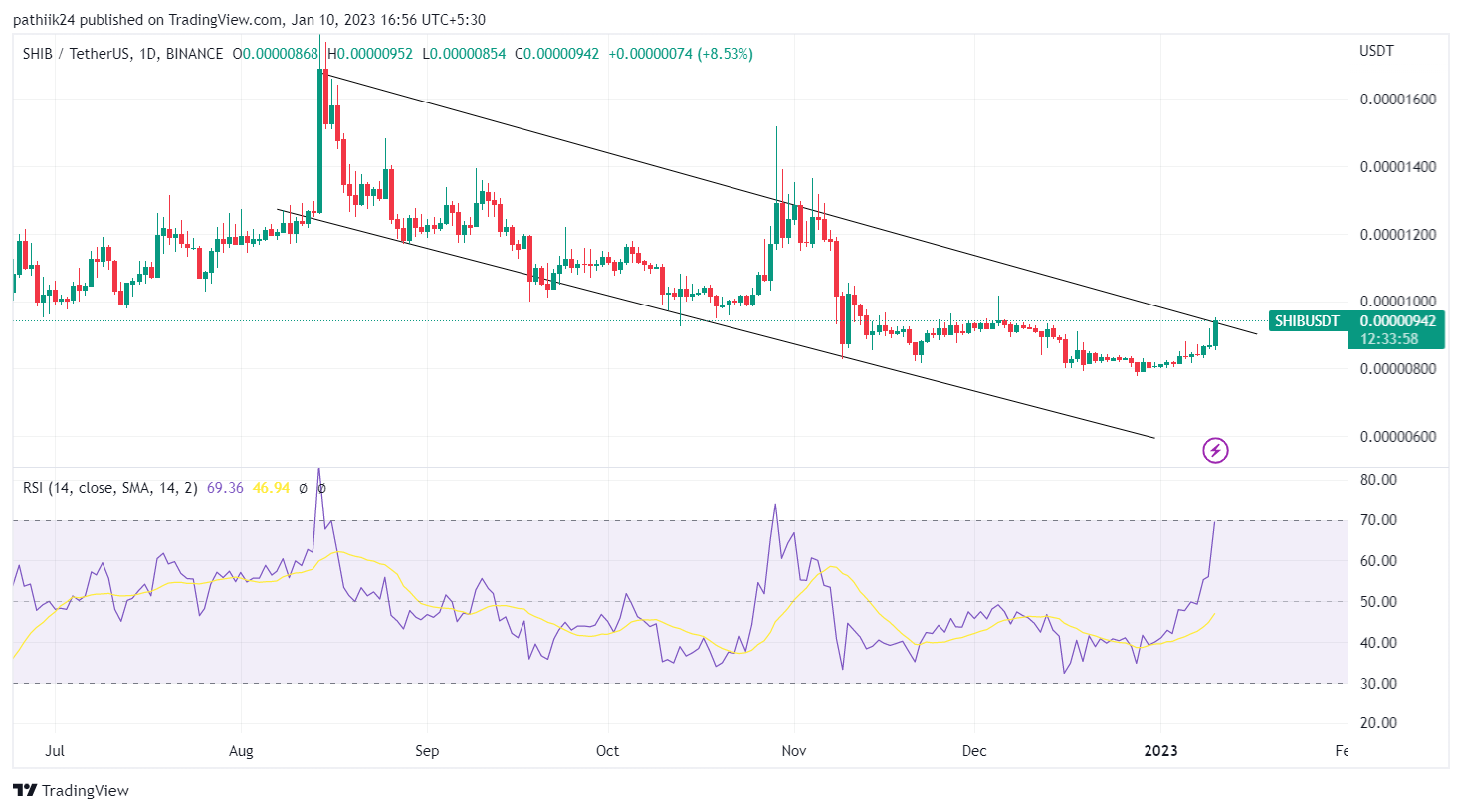 On the 4-hour chart, price action has already formed and broken the rising wedge chart pattern, moving to the upper side. The breakthrough occurred on January 8, when the RSI reached a high of 60 and the MACD indicator began generating dark green bars, indicating a bullish trend.

Following the breakout, the price has been steadily rising. The current level of volatility is really high, which is why prices are rising. 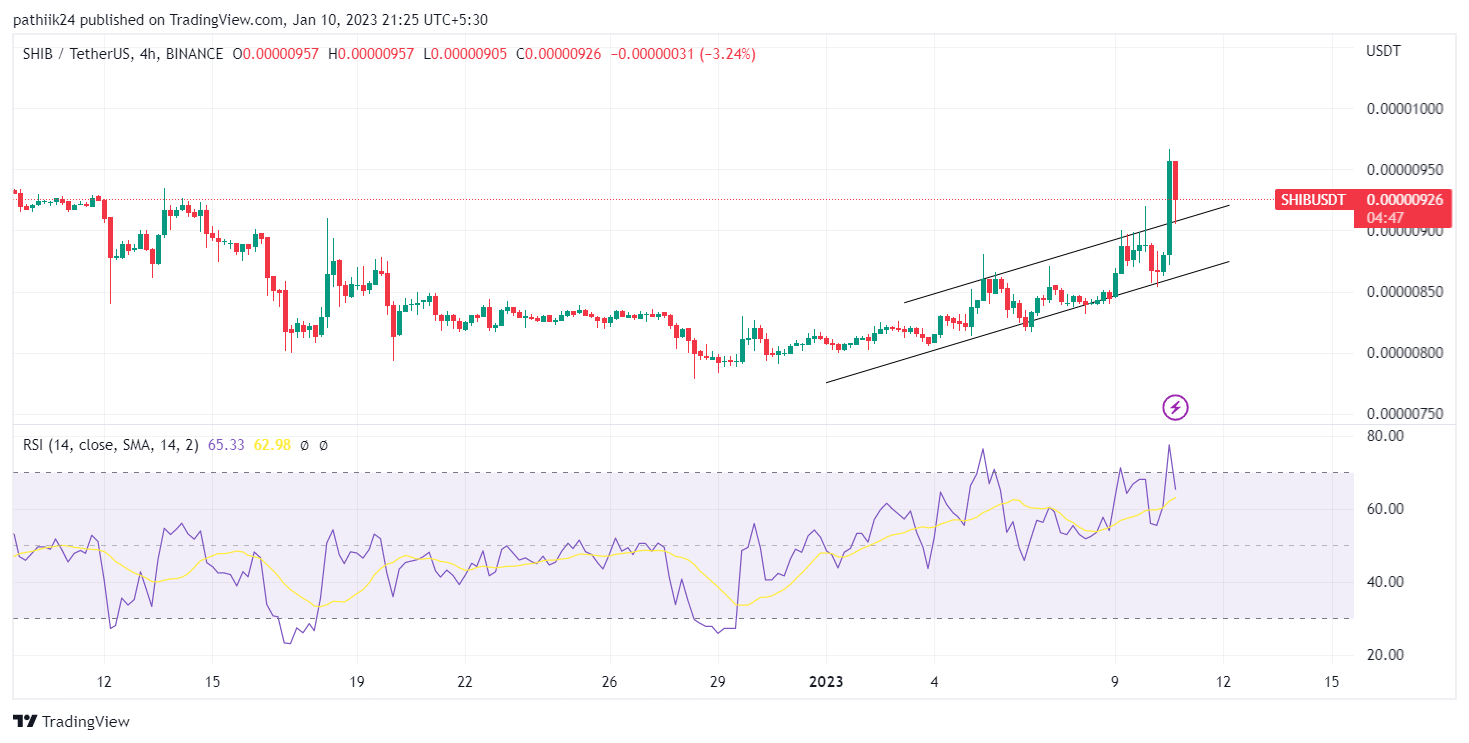 ShibaInuHodler, a Twitter user with roughly 384,000 followers, wrote a message regarding Shibarium and the significant role he anticipates it to play in burning Shiba Inu coins when it launches.

Shibarium will remove massive amounts of Shiba Inu from circulation, according to Twitter. According to his tweet, these numbers might amount to trillions of meme coins.

Shibarium is the long-awaited Layer 2 solution for the Ethereum chain, on which the Shib network is built, that will allow users to conduct many more transactions without encountering congestion. Shibarium transaction fees will be paid for with the BONE token.

Part of these fees will be transformed into Shiba Inu tokens and permanently withdrawn from circulation by Shibarium developers by being "burned," i.e. locked in unspendable wallets. A similar method is currently in operation for BabyDoge meme currency, a SHIB competitor. On December 1, BabyDoge developers began burning transaction fees and buying back Baby Doge Coin, eliminating billions of meme tokens from circulation.

Who is the major owner of Shiba?

The co-founder of Ethereum, Vitalik Buterin, is the biggest holder of Shiba Inu, having received 50% of all SHIB circulation at the time of the coin's introduction in May of last year. He removed roughly 41% of the coin's total circulation when he mailed the equivalent of 410,241,996,771,871 SHIB, worth $7.3 billion, to an address that was no longer in existence.

Shiba Inu's market cap at $1, assuming the same number of tokens are in circulation, would be a stunning $549 trillion. Let's put this absurd figure into context. For example, Apple, the most valuable business in the world, has a current market valuation of $2 trillion.

Why is Shiba Inu increasing?

The Ethereum (ETH) blockchain hosts the Shiba Inu cryptocurrency. When the gas or transaction fees rise, which happens when too many transactions occur at a particular moment and choke the network, the cost of transactions on apps hosted on the Ethereum Blockchain generally rises.