Encryption standards play a vital role in securing blockchain ecosystems from malware and unusual authentication or attacks. Generally, Cryptographic algorithms are used to protect the data within a blockchain which only could be accessed via keys.

These keys can be publicly shared or even act as private keys. In this section of basics, we are going to learn about Symmetric-key cryptography which is an algorithm for Blockchain encryption. Let’s dive deep into this.

What is Symmetric-Key Cryptography?

Symmetric-key Cryptography is a kind of encryption that uses a single key (a secret key) to encode and decode electronic data. The key must be exchanged between the organizations communicating using symmetric encryption so that it may be utilized in the decryption process. This encryption method is distinct from asymmetric encryption, which employs a pair of keys, one public and one private, to encrypt and decode messages.

For example, we all have used Google docs (if not then use it once). The content we put on our doc file is only visible to us until we disable the sharing restrictions from the top right bar. When we opt for the “Share with anyone” feature, we get a link which then could be shared with a reliable person whom you wanted to get access to your doc file to see the content.

Suppose the doc file is “Data or information” and the “link” is the key. This suffices the example of Symmetric-key cryptography.

Encoding data in this manner has been widely utilized in earlier decades to permit covert communication between governments and armies.

How Does Symmetric-Key Cryptography Work?

Symmetric encryption technique ”scrambles” the data so that it cannot be understood by anybody who does not have the secret key to decode it. Once the intended receiver who holds the key obtains the message, the algorithm reverses its activity such that the message is restored to its original readable form. The secret key used by both the sender and the receiver might be a specific password/code or a random string of letters or numbers created using a secure random number generator (RNG). 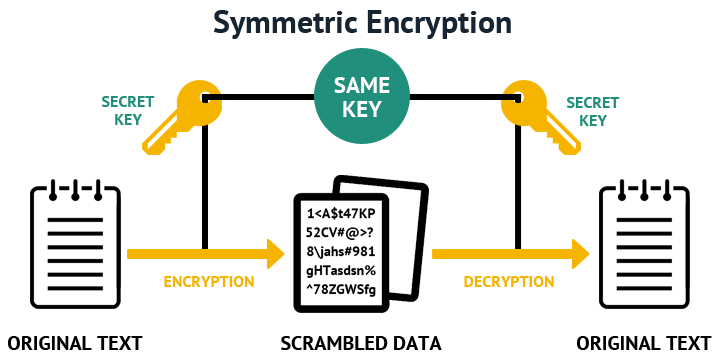 The above diagram could be concluded as:

The previous example shows that the information was accessed using the same key.

The use of a single key for both encryption and decryption streamlines the encryption process. After all, you're using a single key to convert readable plaintext into unreadable gibberish (ciphertext) and vice versa. One benefit of employing symmetric encryption is that it enables data privacy and confidentiality without the additional complexity of many keys.

For some applications, symmetric key encryption works on its own. It's handy for encrypting databases and files, for example, when no data is being sent openly between parties.

Block algorithms serve to secure electronic data blocks. While using the authorized private key, predefined set lengths of bits are changed. This key is then applied to every block. When encrypting network stream data, the encryption system stores the data in its memory components while waiting for the whole blocks. The amount of time the system waits can create a security hole and compromise data security and integrity. The solution to the problem comprises a method in which the data block can be lowered and merged with the contents of the preceding encrypted data block until the rest of the blocks emerge. This is referred to as feedback. Only once the complete block has been received it is then marked as encrypted.

Stream algorithms are not stored in the memory of the encryption system but instead come in data stream algorithms. This approach is deemed slightly safer since a disk or system does not preserve data without encryption in the blocks.

Some examples of Symmetric-Key Cryptography:

Symmetric cryptography is generally used for bulk encryption / encrypting huge volumes of data, such as for database encryption, due to its greater performance and faster speed (relative to asymmetric encryption).

The secret key could only be accessible to the database itself to encrypt or decrypt in the event of a database. Comparing existing standards for asymmetric algorithms to industry-standard symmetric encryption, one can see that the latter is less susceptible to developments in quantum computing (at the time of writing).

Here are some instances in which symmetric cryptography is applied:

In addition to encryption, symmetric ciphers are frequently employed to accomplish other cryptographic primitives.

However, without involving extra parties, symmetric ciphers cannot be employed for non-repudiation (the assurance that someone cannot deny the validity of something) reasons.

The most recent technologies could sometimes be the ideal fit when it comes to encryption.  In reality, as cryptography develops in a new way, new protocols are being built to keep up with would-be hackers and to safeguard the data to increase privacy. In the upcoming years, hackers will inevitably make things difficult for specialists, thus we can confidently anticipate new advancements from the cryptography community.