Bitcoin, one of the oldest digital currencies, runs independently of any central authority or government monitoring. Bitcoin(BTC) is instead based on peer-to-peer software and cryptography.

All bitcoin transactions are recorded in a public ledger, and copies are kept on servers worldwide. A node, or server, may be set up by anybody with a spare computer. Instead of depending on a central source of trust, like a bank, consensus on who owns which coins is achieved cryptographically among these nodes.

Bitcoin itself is a giant cosmos filled with various opportunities and drawbacks. From its mechanism to its working, it is all complex but revolutionary. This article will introduce you to basic concepts of Bitcoin Mining and investment. What could be the price prediction for the future and overall meaning of Bitcoin Blockchain.

As per Bitcoin’s official website, “Bitcoin employs peer-to-peer technology to function without a central authority or banks; the network manages transactions and issues bitcoins collectively. Bitcoin is open-source; its design is available to the public, no one owns or controls Bitcoin, and everyone may participate. Many of Bitcoin's unique qualities enable intriguing uses that no prior payment system could cover.”

Bitcoin is just another way of keeping your fund transaction private without showing it to anyone. Banks and central authorities always keep an eye on your daily transactions. Every transaction made by you is monitored by someone, isn’t it like breaching your privacy?

Bitcoin was generally made to solve this issue. Before understanding Bitcoin fully, we need to rewind how the revolutionary digital asset was created back then.

How Does Bitcoin Blockchain Work?

Cryptocurrencies are a component of a blockchain and the network that powers it. A blockchain is a distributed ledger, which is a shared database that records data. Encryption technologies protect data within the blockchain.

It’s basically like school exams. The yearly exams are more complex than the unit tests.

How Bitcoin is Mined?

Bitcoin isn’t physical money or bill which could be exchanged from any bank or authority. Bitcoin is just a code that needs to be cracked to get the reward. But, it’s not as easy as it sounds.

Bitcoin can be mined using a variety of devices and software. When Bitcoin was originally introduced, it was feasible to mine it competitively on a home computer; but, as the network gained in size, more miners joined, lowering the chances of being the one to solve the hash. You can still mine with your computer if it has updated hardware, but your odds of solving a hash (a string of fixed length) individually are slim. We will talk about Hash later.

You have various alternatives for being a successful Bitcoin miner. You may utilize your existing computer to run Bitcoin-compatible mining software and join a mining pool. Mining pools are groups of miners that pool their computing power to compete with huge ASIC mining farms.

Significance of Bitcoin(Make H3 of What is Bitcoin)

Bitcoin is a decentralized technology with far-reaching implications that go beyond cash. Bitcoin is, first and foremost, a social concept. It is possible to reconstruct the human value exchange system by rethinking the financial system.

Consumers in many nations have resorted to bitcoin to give a more trustworthy exchange value that cannot be regulated by a central authority, while inflation is fast depreciating the local fiat money.

Summing up all the things, Bitcoin is:

Where to Buy Bitcoin?

Bitcoin is a virtual currency that only can be traded online. Exchanges are a useful alternative since they provide a wide range of services and more cryptocurrencies for trading, allowing investors to buy, sell, and hold bitcoin while also allowing users to withdraw money to their online wallet for protection.

Some of the popular exchanges are Binance, Coinbase, Crypto.com, Kraken etc.

After registering into the desired exchange, you need to make payments to acquire Bitcoin. Once the payment is approved by the exchange, your Bitcoin will be reflected in your wallet.

Bitcoin or any digital token could be reserved in Cold wallets and Hot wallets. It solely depends on the user where they want to keep their Bitcoins. Although, it’s easy to carry Bitcoin in cold wallets (Wallets associated with exchanges) are always on the verge of getting exploited by hackers. However, Hot wallets or Hard drive wallets are more secure if one wants to keep Bitcoin away from the internet touch.

The Crypto market is said to be one of the most volatile markets. As per the market values, the Bitcoin price always fluctuates and doesn’t have any specific value. Although, there are few stablecoins which grow slowly but maintain a steady value so traders could use them while trading without experiencing any price change.

Bitcoin is one of the most volatile crypto tokens out there. Bitcoin investors have seen various Market upsurges and Downturns. From a zero-worth asset, Bitcoin’s journey to reach $69,000 is remarkable. Although, numerous market turmoil, financial crisis and pandemic took the value down still the project holds a lot of potentials.

As per the trading view chart analysis, downslope price action could be seen. This inclined line is acting as a resistance to the Bitcoin price hike. Once the value goes par this line, Bitcoin could see a bull rally. 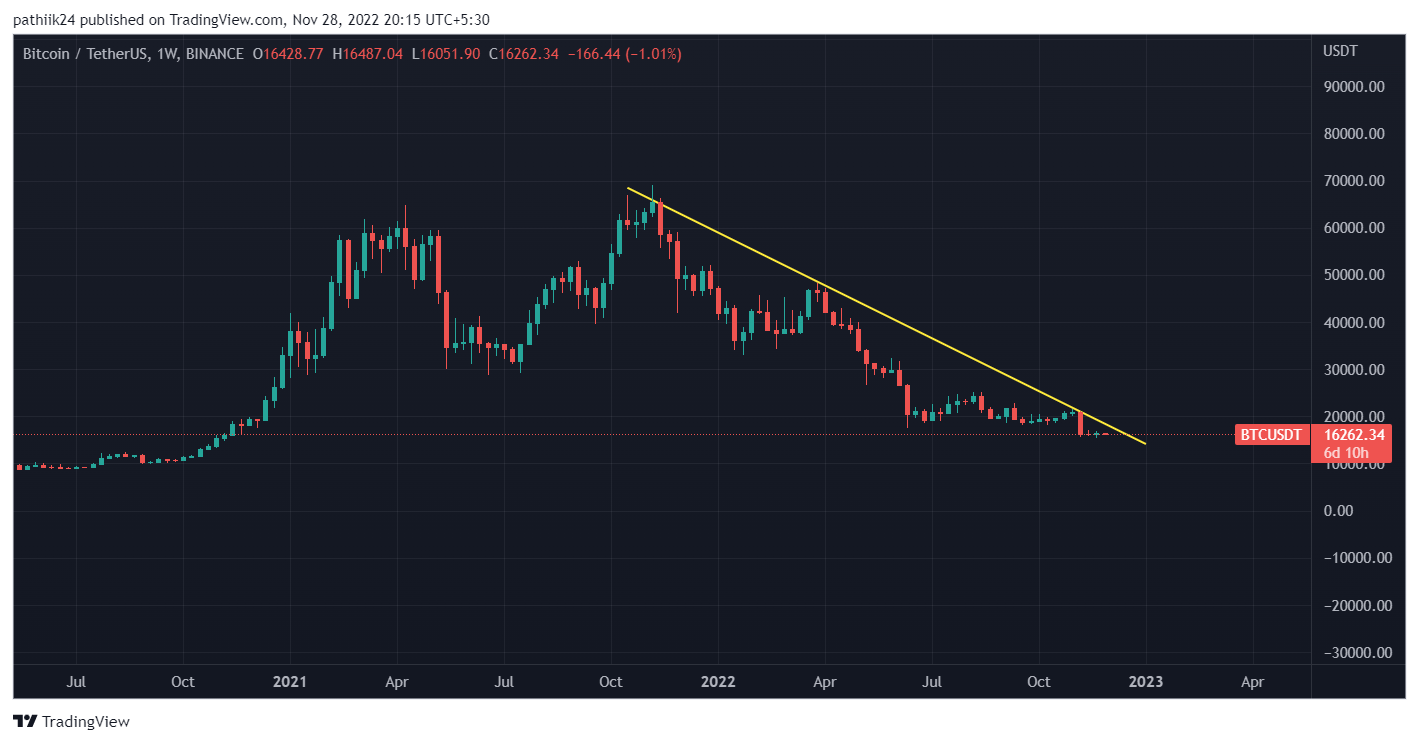 Going through the major Price changes, the historical Bitcoin data looks something like a roller coaster ride. 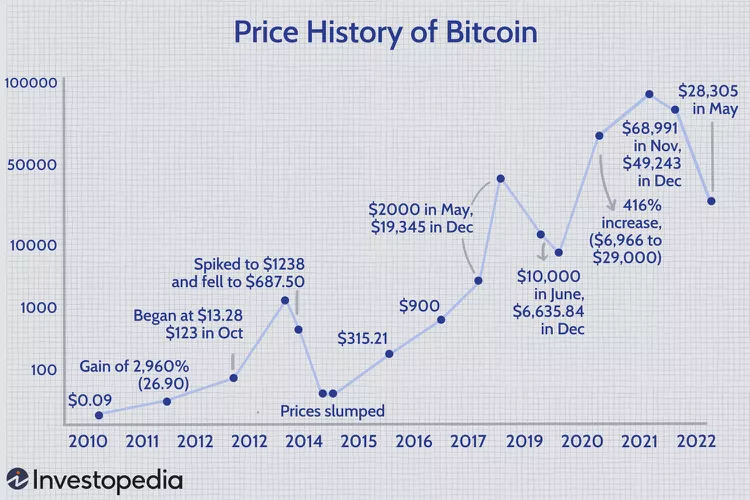 The year 2022 began with a Bitcoin price of roughly $46.31k, while Bitcoin peaked in March at USD 47,689. However, because of the gloomy market, the resulting path has been small. The Bitcoin price has been steadily declining, dashed the aspirations of both ordinary and institutional investors.

In 2024, the highest trade value of Bitcoin would be roughly USD 85,000. In comparison to the previous year, the price of Bitcoin and other cryptocurrencies is expected to rise dramatically in 2024.

Business2community, on the other side, is less optimistic about Bitcoin's price ascent, forecasting that it will reach US$ 80,000 by the end of 2025.

Bitcoin is by far the most successful virtual currency today, but like with every new frontier, there will be challenges. Despite bitcoin's recent popularity, investing in cryptocurrency has some severe dangers.

With so many individuals racing to participate, it's critical to be aware of the risks associated with this new market. Here are the top ten hazards of bitcoin investment, as well as how to prevent them.

The Crypto market especially Bitcoin is subjected to immense volatility. The price swing is just uncertain. Many investors have drained their life savings into Bitcoin. As the market is very unpredictable, prices could drop severely. Like in 2012, Bitcoin price soared more than 1200% in just a few months. In contrast, Bitcoin's price is more than 70% down from its all-time high at the time of writing this blog.

The bitcoin market is now lacking substantial regulations. The government lacks a clear stance on bitcoin; the business is simply too nascent. Regulations are required to mature a market. A draft law stating the new worldwide regulatory framework for cryptocurrencies was recently introduced in the US Parliament. Currently, bitcoin is not a widely accepted currency, but the future is unpredictable.

Bitcoin works on the Proof of work mechanism which makes the crypto unsustainable. To mine a Bitcoin block a huge amount of energy is required.

Miners require a large amount of computer power to tackle challenging mathematical problems. It leads to the depletion of precious resources (money, energy, space, hardware). It is estimated that by the end of 2018, transaction verification would consume 0.3% of the world's electricity.

Each Bitcoin transaction consumes 980 kWh, which is enough to power an ordinary Canadian family for more than three weeks.

This isn't only a Bitcoin problem. Almost every other cryptocurrency that employs the Proof-of-Work (PoW) consensus algorithm has a similar issue.

Due to its unregulated price, Bitcoin is not accepted widely. This issue points out the basic necessity of any currency to be exchanged in return for some values. Bitcoin can’t be exchanged everywhere. It’s still not seen as a new payment option hence the use of Bitcoin in the traditional market is still a vague topic.

However, few businesses accept it as a valid form of payment. Currently, bitcoin trades are permitted on a few online retailers, like Overstock, Newegg, and Monoprix. Furthermore, bitcoin owners may use their coins to book flights with firms such as AirBaltic, Air Lituanica, and CheapAir.com. Unfortunately, many businesses do not accept bitcoin as a valid form of payment.

In addition to cybercrime, the bitcoin market has a good degree of fraud. Buyers and sellers are trying to trade bitcoins online, but due to the cryptocurrency's popularity, some of these exchanges may be fraudulent.

The Consumer Financial Protection Bureau and the Securities and Exchange Commission have both issued warnings about these transactions, in which naïve investors are cheated out of their bitcoins through fraudulent trades. This absence of security poses a significant danger to investors.

But, Bitcoin’s SHA-256 could be easily breached by Quantum computing as it could make several calculations within a seconds. It is capable of degrading the RSA encryption used in Bitcoin's functioning. Without this, Bitcoin data transit over the internet will be unsafe. When this happens, it will be very easy to mimic actual users' transactions. It will also allow people to take coins from one another.

In October 2008, a person or group going under the pseudonym Satoshi Nakamoto launched the Cryptography Mailing List at Metzdowd.com. "I've been working on a new peer-to-peer electronic cash system with no trusted third party," the anonymous individual or group claimed. This now-famous white paper, "Bitcoin: A Peer-to-Peer Electronic Cash System," published on Bitcoin.org, would become the Magna Carta for how Bitcoin functions today.

The first Bitcoin block, Block 0, was mined on January 3, 2009. This is also known as the "genesis block," because it contains the text: "The Times 03/Jan/2009 Chancellor on edge of second bank rescue," which might be proof that the block was mined on or after that date, as well as significant political commentary.

Bitcoin was founded and came into operation in 2009, during the economic downturn. Bitcoin was designed to be a peer-to-peer electronic cash system, but it has also attracted the interest of crypto-curious investors as a store-of-value currency equivalent to gold.

How Bitcoin is traded?

How to make money from Bitcoin?

Individuals can earn through Bitcoin via Mining or trading.

How long does it take to mine 1 BTC?

How many Bitcoins are in circulation?

Satoshi Nakamoto is a pseudonym for the person or individuals who assisted in the development of the initial bitcoin software and introduced the concept of cryptocurrencies to the public in a paper published in 2008.