What is Bitcoin Rainbow Chart? Explained

Yes, there is such a thing as a Bitcoin rainbow chart. And today's article will educate you of all you need to know on the same.

One of the most traditional and straightforward techniques to forecast the future price of Bitcoin (BTC) is to use the Bitcoin Rainbow chart. It provides perceptions of long-term price changes by employing historical performance and statistical technologies.

An early Bitcoin investor known on Reddit as Azop is the creator of the Rainbow chart. He created the chart in 2014 as an interesting method of looking at long-term price fluctuations while ignoring the daily volatility noise.

Also read: The Future of Bitcoin Mining in 2023: Will It Be Sustainable?

The bitcoin rainbow chart is a tried-and-true, mathematically sound method for identifying important trading zones. It employs coloured bands. And a rainbow is a fitting representation, yeah. The BTC rainbow chart, in contrast to conventional trading charts, overlays the historical price trend on a rainbow-like logarithmic chart, eliminating volatility and false information.

The rainbow-inspired colour bands that the chart employs to represent market sentiment toward BTC at various price ranges give it its name. Investors may time their entry into the market and quit it by using this colour-coded indication of market mood.

The rainbow chart, in essence, is a logarithmic graph with the historical price trend of Bitcoin superimposed on it. It assists in predicting long-term price peaks for Bitcoin without taking into account daily volatility.

The components of a rainbow chart are listed below along with what they all represent for you as an investor: 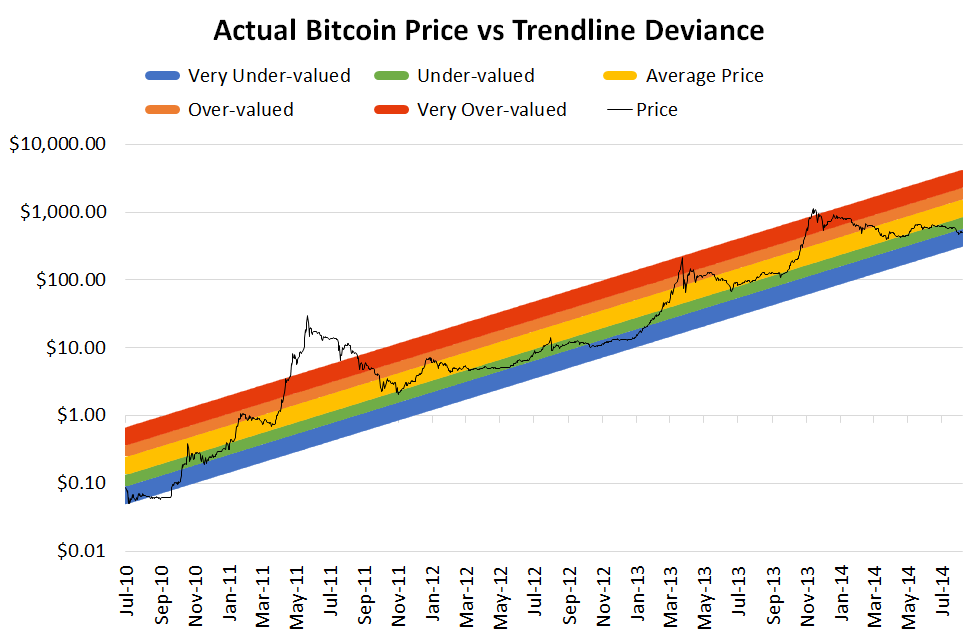 It's simple to read the bitcoin rainbow chart. You may observe that any price change since 2014 would fall in one or more distinct areas of the rainbow chart since it uses historical pricing data. The chart's beginning point is the central yellow zone, which is located directly in the centre. Deviations are colour bands that are above and below the yellow band.

Investors begin to believe that BTC prices are in the bubble range when it enters the warmer zones (reds and oranges). When BTC lays down for a spell in these warmer regions, profit booking frequently follows.

The BTC is trading over its fair value and in the "Bubble Zone" when there is a sell-off in the warmer zones, such as red and orange.

On the other hand, BTC moving in the direction of the cooler green and blue bands suggests accumulation and purchasing intentions. We may anticipate that BTC will be cheaper in these areas.

The Rainbow Chart indicates that, based on the current price levels, BTC is in the blue zone, which is essentially a fire sale.

The Rainbow chart is regarded as being quite accurate because it is based on historical data and makes use of statistical methods. A BTC Rainbow chart's analysis reveals that prices often fall after crossing the uppermost red band. Additionally, they often grow after lowering themselves to the lowest blue bar.

To sum up, the bitcoin rainbow chart is useful for predicting long-term price alterations. It monitors market mood, groups price changes into designated zones, and has thus far been quite accurate. The rainbow chart may be used as a mid-to-long-term price forecasting tool when combined with other indicators.

Without a doubt, yes. An understandable and largely reliable predictor of Bitcoin's long-term price changes is the Bitcoin Rainbow chart. It might help you decide when to purchase or sell on the cryptocurrency market. However, given the significant volatility of crypto assets, you shouldn't base your investment decisions just on a single indication.

The bitcoin rainbow chart is trustworthy, yes. Since its start in 2014, it has produced reliable findings. It is a credible tool to assess long-term price fluctuations of BTC due to the use of logarithmic regression modelling, a trustworthy statistical modelling technique.

Will Bitcoin go up?

By the end of 2023, when the second halving will take place, Bitcoin may reach new highs and trade above $75,000. Despite some of the finest altcoins potentially becoming more useful than Bitcoin during the ensuing years, this cryptocurrency should keep its position owing to its role as a "first mover."