Polkadot(DOT) - Meaning of Polkadot and how Polkadot works and uses. Also know the Polkadot’s token, How Polkadot is mined, and Polkadot’s price forecast.

With the help of the Polkadot protocol, blockchains may be connected and currency and data can now be moved between disparate networks that were not previously compatible. Simply put, Polkadot (DOT) is a blockchain network that links blockchains together, enables users to create blockchains quickly and easily using their Substrate framework, hosts blockchains, manages their security and transactions, and also aids in bridging Polkadot blockchains with other networks, such as Ethereum and Bitcoin.

The Polkadot protocol is made to securely connect unconnected blockchains so that value or data may move between, for instance, the Ethereum and Bitcoin blockchains without the need for a middleman. Through the use of several parallel blockchains, which offload most of the processing demand from the main blockchain, it is also intended to be quick and scalable

A central Relay Chain linking Parachains, Parathreads, and Bridges controls the Polkadot architecture. Let's evaluate each of these in turn.

Polkadot's development is similarly decentralized; it is overseen by a Technical Committee, a Council, and a dispersed group of DOT token owners. The goal is to unite DOT token holders and the Council to make decisions on network upgrades.

By bonding their tokens (depositing a minimum quantity to a proposal) for a specific amount of time, active DOT token holders can propose a referendum on modifications to the network and cast votes on other people's ideas. In the following vote session, the proposals with the most bonding support will be chosen first. After propositions have been put to a vote, tokens are then released from their bond.

The DOT token holders elect the Council, an on-chain institution that is in charge of proposing modifications and selecting which changes are implemented. Additionally, it represents passive DOT holders in the ecosystem and oversees the development treasury funded by network fees. For approval, council member initiatives need fewer votes than those from regular DOT holders.

The development teams that are constructing the Polkadot network then make up the Technical Committee. It is chosen by the Council members and has the same emergency powers as the Council, including the ability to move quickly to implement extraordinary proposals.

Whether a plan is put out by the Council or the public DOT holders, it will need to go through a vote to allow all DOT holders to assess their options.

How does Polkadot function?

Polkadot uses a method of public and private key encryption to enable the transfer of money from one digital wallet to another. Your recipient address is the hash of your public key, and your private key serves as a password for approving and broadcasting transactions over the network. These pending transactions are confirmed in a block of transactions every six seconds or so, and the blocks collectively make up the Polkadot blockchain.

Of course, Polkadot provides much more than just the ability to send and receive money. Polkadot is a sharded multi-chain network that may process data and transactions on many chains simultaneously, or "Parachains," under the control of a central relay chain.

Due to its sharded architecture, the network is divided into several sections or shards. Because transactions may now be handled concurrently on each shard rather than sequentially over the whole network as they were in earlier blockchain generations, throughput has increased.

Therefore, many Parachains may connect to Polkadot, benefiting from the network's overall security while greatly enhancing scalability, interoperability, and cross-chain capability and removing the congestion, excessive fees, and incompatibility of older blockchains. With the aid of a governance structure run by owners of the DOT native token, Polkadot maintains improvements automatically without the need for hard forks.

Instead of the mining reward incentives given in Proof-of-Work blockchains like Bitcoin, Polkadot employs a Nominated Proof-of-Stake (NPoS) consensus mechanism, paying users for jailing DOT tokens in a process known as staking.

Holders of DOT tokens can stake tokens to participate as Nominators, choosing to support up to 16 Validators as trusted candidates with their stake. Collators on Polkadot maintain Parachain nodes, Fishermen nodes keep the network safe, and Stakers interested in maintaining the entire network can run a Validator node. Then, validators create new blocks, check Parachain blocks, and ensure finality. Later on, we'll go into further depth about these jobs.

How to mine Polkadot

All DOT holders have a vote in the well developed governance structure of the Polkadot network and actively contribute to its defence. Polkadot has four primary components, as you may have previously read in another post about the platform: nominators, validators, classifiers, and fishers. Each of these groups is responsible for a different activity that helps to safeguard and maintain the network and root out misbehaviour.

The network blocks must be sealed by the Validators.

The blocks and the data required to build new network blocks are maintained by the classifiers.

The Fishers are in responsible of spotting potentially harmful activity on the network, and that's all.

In terms of the consensus procedure, the network chooses validators and nominators using the NPoS (NominatedProof of Stake) mechanism in order to maximise chain security. It's a variation on Proof of Stake (PoS) where any number of DOT token owners can pick a sizable number of validators to carry out the relay chain.

There are no under-represented minorities in the NPoS's proportional representation system, which allows each minority in the nomination pool to elect a certain number of validators in proportion to their participation.

Nominators are financially motivated to select validators with a great track record of performance and safety procedures since they share possible fines and cash incentives with the validators they recommend.

The selected validators create new blocks, validate the blocks in the parachain, and guarantee finality. Nominators have the option to endorse just certain validators through their involvement.

Regardless of participation, the system pays all validators equally for validation incentives, and once the validator's payment has been subtracted, participation benefits are dispersed similarly to all participants.

The DOT token has two purposes: it may be staked on the network to increase network security (a process known as bonding), and it can also be used in the governance mechanism.

1. Staking: Just as with other proof-of-stake blockchains, staking DOT encourages network users to behave honorably by allowing them to hold DOT as collateral for good conduct. Those that risk their DOT are rewarded.

2. Governance: Through referenda—a voting system weighted by stake—DOT holders are granted the rights and ability to participate in elections.

What Is the Current Circulation of Polkadot (DOT) Coins?

Following the community governance vote in 2020 to redenominate at a 1:100 ratio from the 10 million tokens at genesis, DOT now has a supply of about 1 billion tokens, eliminating tiny decimals and facilitating computations.

The quantity of tokens is anticipated to grow by 10% annually as a result of Polkadot's inflationary monetary strategy, with Validator payments based on the staking rate and the balance going to the network treasury together with transaction fees to dynamically modify the incentive to engage in staking.

What Distinguishes Polkadot From Ethereum?

There has been significant discussion about how Polkadot differs from Ethereum given that they both have the same founder. Indeed, there are significant parallels between the architecture and functioning of Ethereum and Polkadot.

Both networks have a primary blockchain that settles transactions and permits the development of several auxiliary blockchains that make use of it. Both systems also employ staking in place of mining to maintain network synchronization.

Ongoing research is being done to determine the best way to interoperate network transactions. For customers who would want to create apps utilizing Ethereum's code and community but that would operate on Polkadot, Parity, for instance, has developed technology.

As is common knowledge, each token is unique in some way. Polkadot attempts to link chains, whereas Ethereum seeks to provide a safe public blockchain for high-value transactions. The uptake of Ethereum is stronger. It now fulfills a lot more useful functions.

But the benefits of DOT might be far greater. It is a more recent coin, and its value has already greatly risen. Therefore, there could be more to come. In any scenario, both tokens have the power to change the direction of the cryptocurrency market.

Polkadot, one of the most cutting-edge cryptocurrency projects currently available, has made a name for itself in the industry and is only expected to grow. As a consequence, many investors are interested in it. Here is our forecast for Polkadot prices until 2027. 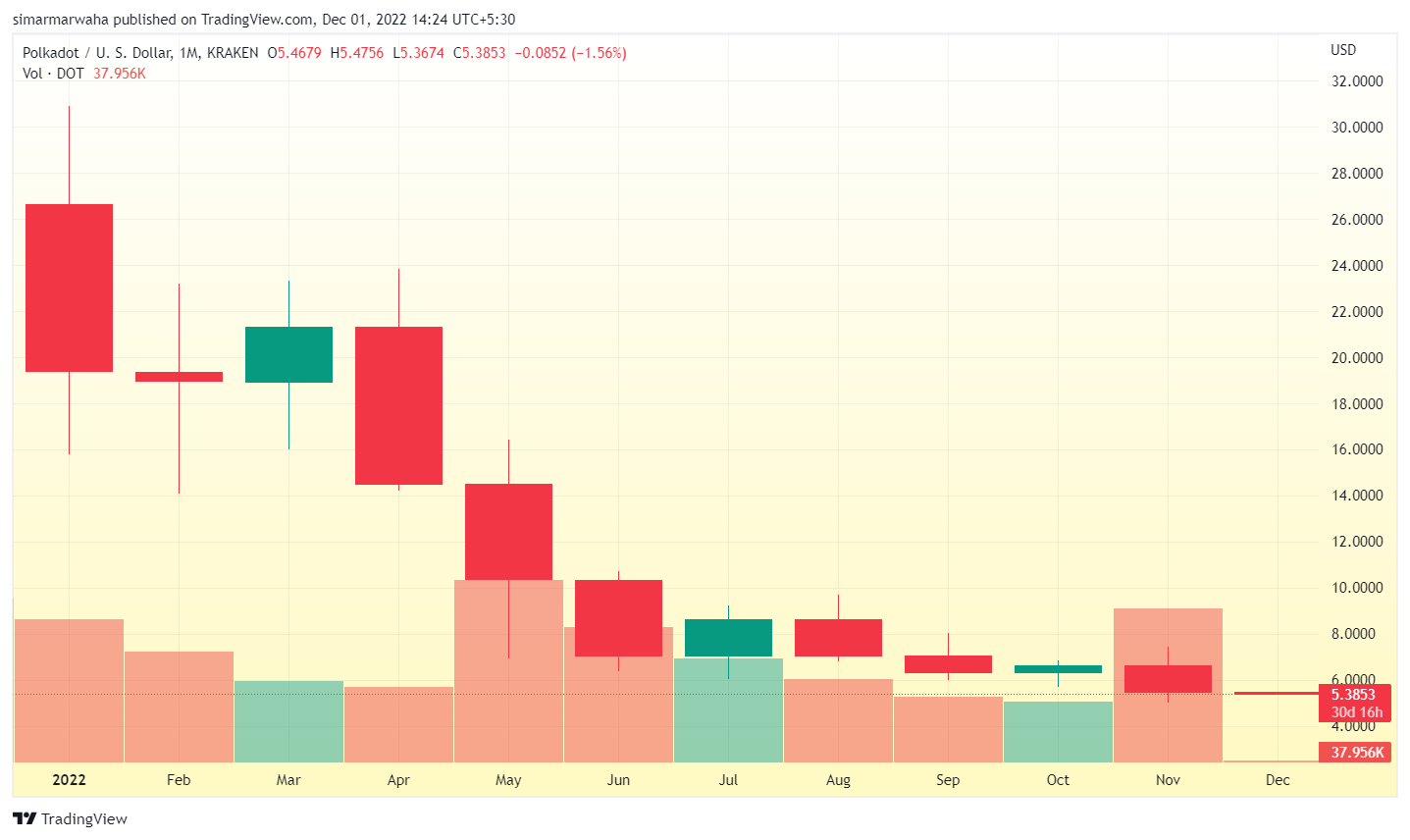 According to the research on Polkadot pricing from prior years, it is predicted that the minimum price will be roughly $7.93 in 2023. The maximum anticipated DOT price is maybe $9.42. In 2023, the trade price may be $8.16 on average.

Based on technical research of Polkadot pricing by cryptocurrency specialists, DOT is anticipated to have the following lowest and maximum values in 2024: around $11.33 and $13.85, respectively. The typical anticipated trading expense is $11.74.

According to crypto specialists' research of Polkadot costs, the maximum and minimum DOT prices for 2026 are projected to be $29.66 and $25.38, respectively. It will often trade for $26.26.

The fluctuations of Polkadot are continually being studied by crypto professionals. According to their forecasts, the average DOT price will be close to $37.05. It may fall to a minimum of $36, but it might still rise to $43.34 by the end of 2027.

The aforementioned Polkadot pricing projections were obtained from Changelly.  This is not meant to be investment advice; it is only an instructive supplement to our content.

Wood's history is noteworthy since he created Solidity, the programming language used by programmers to create decentralized applications (dapps) on the Ethereum platform. He was also the founding CTO of the Ethereum Foundation and had previously worked as a research scientist at Microsoft.

Is Polkadot a good investment?

Polkadot is still extremely young, according to NASDAQ. If you enjoy taking chances, your investment may result in significant long-term gains. However, it may potentially fail if more advanced technology replaces Polkadot.

What is Polkadot used for?

Through the use of the Polkadot platform, many blockchains may share and combine their security while transferring messages, including money, in an untrusted manner. In a nutshell, Polkadot is a multi-chain, heterogeneous, scalable solution.

Is Polkadot better than Ethereum?

While Ethereum wants to offer a secure public blockchain for high-value transactions, Polkadot intends to link chains. The adoption of Ethereum is stronger. These days, it serves a lot more useful purposes. The upside of DOT, though, could be greater.

How high can Polkadot reach?

Polkadot costs are anticipated to increase in 2022, with a minimum price of $5.64 being forecast. This is according to Challengly. The DOT price may not exceed a threshold of $6.08. Around $5.86 is predicted to be the typical trading price.

According to Investmentu.com, almost all predictions state that Polkadot will increase and reach $1,000 by 2027 or later. However, because of the uncertainty and volatility that are now present in the cryptocurrency market, these expectations are starting to wane.

Which is better Solana or Polkadot?

Solana is the fastest blockchain network on the market in terms of network speed, with the capacity to handle around 65,000 transactions per second. Polkadot, which can only validate roughly 1,000 transactions within the same time period, is clearly outperformed by it.