What is Ripple(XRP)? And How Does XRP Coin work? And Its Features

Ripple(XRP):Know what is Ripple, What is XRP, How XRP works, Ripple features, pros and cons of Ripple(XRP), Price predictions of XRP, and history of Ripple.

Ripple (XRP) was founded by Arthur Britto and David Schwartz, who approached Ryan Fugger, who had debuted in 2005 as a financial service to give safe payment choices to members of an online community over a worldwide network.

Fugger had created an OpenCoin system that later converted into Ripple. The business has developed its own digital currency, XRP, to allow financial institutions to transfer money with minimal costs and wait time.

Let’s understand Ripple, XRP, what is Ripple, What is XRP, How XRP works, Ripple features, pros and cons of Ripple(XRP), Price predictions of XRP, the history of Ripple, and its core concepts.

Ripple is a blockchain-based digital payment network and protocol, as well as the creator of its own cryptocurrency, XRP. The basic process of Ripple is a payment settlement asset exchange and remittance system, comparable to the SWIFT system for international money and security transfers, that is used by financial institutions and intermediaries trading across currencies.

“If you aren’t solving a real problem for real customers you’re not going to drive velocity in that digital asset.” ㅡ Brad Garlinghouse, Ripple CEO

Ripple's goal of being the platform used by banks and financial organizations to move money from one nation to another. On the sender side, the bank would convert currency 1 to XRP. This amount of XRP would be sent to the receiving-side bank, which would convert it to currency 2. The transfer of XRP between banks in various countries would take seconds rather than days - and this is how Ripple intends to alter the world through the use of XRP.

Ripple In a nutshell:

How does Ripple work?

Ripple, unlike other cryptocurrencies, lacks a blockchain. It's also not mineable. Ripple does not use a blockchain, instead employing its own patented technology known as the Ripple protocol consensus algorithm. This implies that every node must agree to every transaction in order for it to be valid.

Ripple (XRP) is a pre-mined cryptocurrency. A little over 55% of the 100 billion Ripple (XRP) coins that have been produced are held by Ripple. They did this to prevent inflation from becoming uncontrollable. Ripple has locked up their assets in escrow and will only release a specific quantity of XRP into the market at regular periods to guarantee that they remain price-independent.

The agreement strives to strengthen the system's integrity by eliminating duplicate spending.

If a Ripple user opens a transaction with numerous gateways but tries to transmit the same fund to the gateway systems, everything except the first transaction will be deleted. Individual distributed nodes use consensus to determine which transaction occurred first. The confirmations are immediate and take around five seconds. The Ripple platform is regarded as decentralized since there is no central authority that selects who may set up a node and confirm transactions.

Ripple tracks all IOUs in a certain currency for every user or gateway. The Ripple consensus ledger makes public IOU credits and transaction flows between Ripple wallets.

What Ripple can do?

Ripple (XRP) is touted as both an institutional and consumer or retail cryptocurrency. At the moment, Ripple (XRP) supports the following actions:

Instead of converting currency 1 to USD and then to currency 2, Ripple XRP would be the intermediary currency.

Because it just takes seconds to transport Ripple (XRP) across international boundaries, one important application of Ripple (XRP) is as a currency for banks to interact with.

You may accept Ripple (XRP) as money, just like Bitcoin. So, whether you run an eCommerce company or work as a freelancer, you may opt to be paid in Ripple (XRP).

XRP is subjected to high price volatility depending upon technical and fundamental aspects. XRP reached its all-time high ($1.96) on 12 April 2021 and in the next month ($0.78) declined severely plummeted almost more than 60%.

According to price action, the down slope trend line with lower highs proves that the resistance (Yellow line) has not been breached for one year. Any breakout from this support could make the XRP goes into a bull rally. 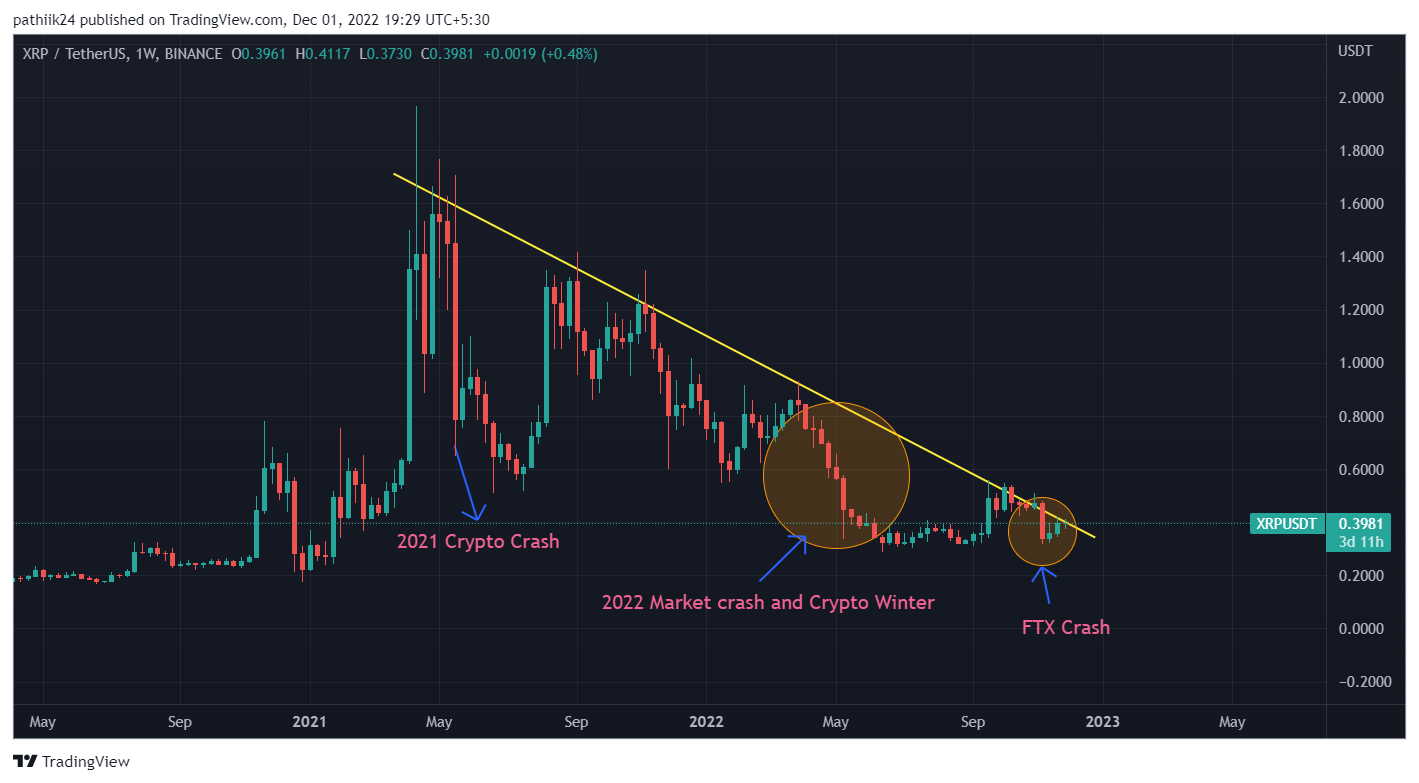 Ripple XRP is subjected to great volatility and price fluctuations.  Any analytics company predicting the price of any crypto or digital assets is based on some tools and algorithms. The below price predictions are made by the analytic firm Changelly. It’s just a prediction and not any investment idea.

According to cryptocurrency experts' technical analysis of XRP values, XRP is anticipated to have the following lowest and maximum prices in 2024: about $0.849915 and $1.04, respectively. The anticipated trading cost is $0.879912.

The values of XRP and their changes over the last years have been studied by cryptocurrency specialists. The minimum XRP price in 2025 is expected to be $1.27, with a high price of $1.48. The trade cost will be roughly $1.31 on average.

According to crypto specialists' study of XRP pricing, the following maximum and minimum XRP values are projected in 2026: $2.16 and $1.78. It will be traded at $1.84 on average.

Crypto specialists are continuously monitoring XRP swings. According to their forecast, the average XRP price will be about $2.58. It might fall to a low of $2.48, but it could yet rise to $3.12 by 2027.

Cryptocurrency analysts anticipated the price of XRP. In 2028, XRP is expected to price between $3.61 and $4.30. During the year, the average cost is estimated to be roughly $3.74.

Cryptocurrency specialists reveal their XRP pricing predictions. The maximum XRP price of $6.41 will define the year 2029. However, it is possible that the rate may fall to approximately $5.25. As a result, the anticipated average trading price is $5.44.

After years of studying the XRP price, crypto specialists have shared their XRP price forecast for 2030. It will be traded for at least $7.39, with a possible high of $8.99. As a result, the XRP price in 2030 is expected to be roughly $7.60 on average.

Pros and Cons of Ripple

How to Mine Ripple (XRP)

While miners cannot mine Ripple (XRP), it is technically possible to do so with other cryptocurrencies. One of the most efficient techniques for mining XRP is to mine Bitcoin (BTC) and Ethereum (ETH) and then swap the generated currency for Ripple (XRP) via exchanges.

The cost is primarily determined by the cost of electricity in your area. If you want to generate more money from Ripple mining, you might consider purchasing an ASIC mining equipment. ASICs, which were designed exclusively for cryptocurrency mining, provide the ideal specifications for more efficient crypto mining. Joining Ripple mining pools is one of the most effective ways for cryptocurrency newcomers to begin mining Ripple online.

Is Ripple a Good Investment?

It may seem counterintuitive, but Ripple's trajectory through 2021 and beyond is likely to be rather favourable, given that it had a really difficult 2020 and preceding years. Throughout 2019, the coin struggled and was one of the worst-performing leading crypto assets. However, this implies that there is a lot of room for it to rise.

Understanding Ripple's history over the last few years is critical to determining whether the coin was still a viable investment in 2021 and whether you should pursue it. However, in order to make this claim, a few important understandings must be explored.

XRP is suitable for a wide range of traders and investors. It is a great coin for general cryptocurrency enthusiasts since it is an altcoin — that is, it is distinct from Bitcoin — yet it is still respected and grounded enough to be considered a top-five coin with a well-established market.

At the same time, because XRP is a coin aimed at mainstream financial institutions, it is a fantastic investment for thematic investors in the financial industry. This means that those wishing to invest in the future of transactions and payments should consider XRP.

The XRP Ledger (XRPL) was created in 2011 by three engineers: David Schwartz, Jed McCaleb, and Arthur Britto. Fascinated by Bitcoin, they set out to construct a better version that improved on its flaws, with the objective of establishing a more sustainable digital asset designed exclusively for payments.

The XRP Ledger was initially introduced in June 2012. Chris Larsen soon joined them, and the trio founded the Company NewCoin in September 2012. (quickly renamed OpenCoin and now named Ripple).

The XRPL founders gave the firm 80 billion XRP, the platform's native currency. Ripple has since placed the majority of the funds in escrow.

The XRPL Foundation, established on September 24, 2020, is an independent and nonprofit organization whose aim is to advance the development and acceptance of the decentralized XRP Ledger. The Foundation received an initial commitment of more than $6.5 million from Coil, Ripple, and Gatehub to fund its efforts in support of the expanding number of developers and other community members working on the XRP Ledger.

Where to buy XRP?

Ripple may be purchased straight on the crypto market with a credit/debit card or a bank transfer. To purchase Ripple on exchanges, you must first register and authenticate an account by providing basic personal information. You will be able to begin purchasing Ripple after the exchange has approved your application.

Is Ripple Better than Bitcoin?

How Does Ripple's Network Work?

To validate account balances and transactions on the Ripple network, a consensus process is used. It is not based on a PoW system like bitcoin or a PoS system like Nxt. Ripple's consensus attempts to improve system integrity by eliminating double-spending.

What is the difference between XRP and Ripple?

Ripple is a worldwide payment network serving large banks and financial institutions as customers. XRP is a cryptocurrency invented by Ripple that is utilized in Ripple products to allow fast currency conversion.

Ripple (XRP) is a cryptocurrency ledger based on blockchain technology that is supported by financial institutions and payment processor networks. While miners cannot mine Ripple (XRP), it is technically possible to do so with other cryptocurrencies.