XRP Consolidates in Green as Ripple vs SEC Dims a Bit

Due to the lack of meaningful developments from the SEC v. Ripple case, investors were forced to follow the larger crypto market.

As the US markets reopened after the holidays, Fed dread seized global financial markets. As investors await today's FOMC meeting minutes, the surging dollar impacted riskier assets. Today, hawkish minutes and better-than-expected US economic figures will put the support for riskier assets to the test.

Prior to the FOMC meeting minutes, the US ISM Manufacturing PMI and JOLTs Job Openings will be scrutinized.

While statistics, minutes, and the NASDAQ Index will give guidance, the SEC v. Ripple case will remain the primary driver.

While the papers may pique investors' curiosity, the fate of the dispute and the SEC's future as a crypto regulator will be decided by two Court opinions.

One crucial decision concerns the William Hinman speech-related papers. The SEC is seeking to keep some material hidden from the public. Following more than six unsuccessful attempts to keep the records from going public, the current move might be a last-ditch effort before negotiating a settlement.

In the past, former SEC Division of Corporation Finance Director William Hinman stated that Bitcoin and Ethereum are not securities. The problematic issue with Hinman's speech was his relationship with Simpson Thacher, which is part of a group that supports Enterprise Ethereum. Hinman rejoined Simpson Thacher after leaving the SEC.

The daily Ripple price analysis favours the bulls, as the price levels have risen to $0.3513 following a robust bullish run. This has stunned analysts and swayed many to the purchasing side following the abrupt change in market direction. During the previous 24 hours, the coin's value increased by 3.51 per cent. The estimated moving average (MA) for the last 24 hours was $0.3484, which is a good indicator because the currency is presently above that threshold.

The volatility for the candlestick chart is steadily growing as the upper limit of the Bollinger bands approaches $0.3644 and the lower limit approaches $0.3338. At the same time, the price has broken through the upper band, indicating a strong bullish trend. As the last week has been positive for cryptocurrencies, and an overwhelming purchasing activity has taken over the market today, the Relative Strength Index (RSI) is displaying a score of 44.17, which is headed towards the over-bought limit. 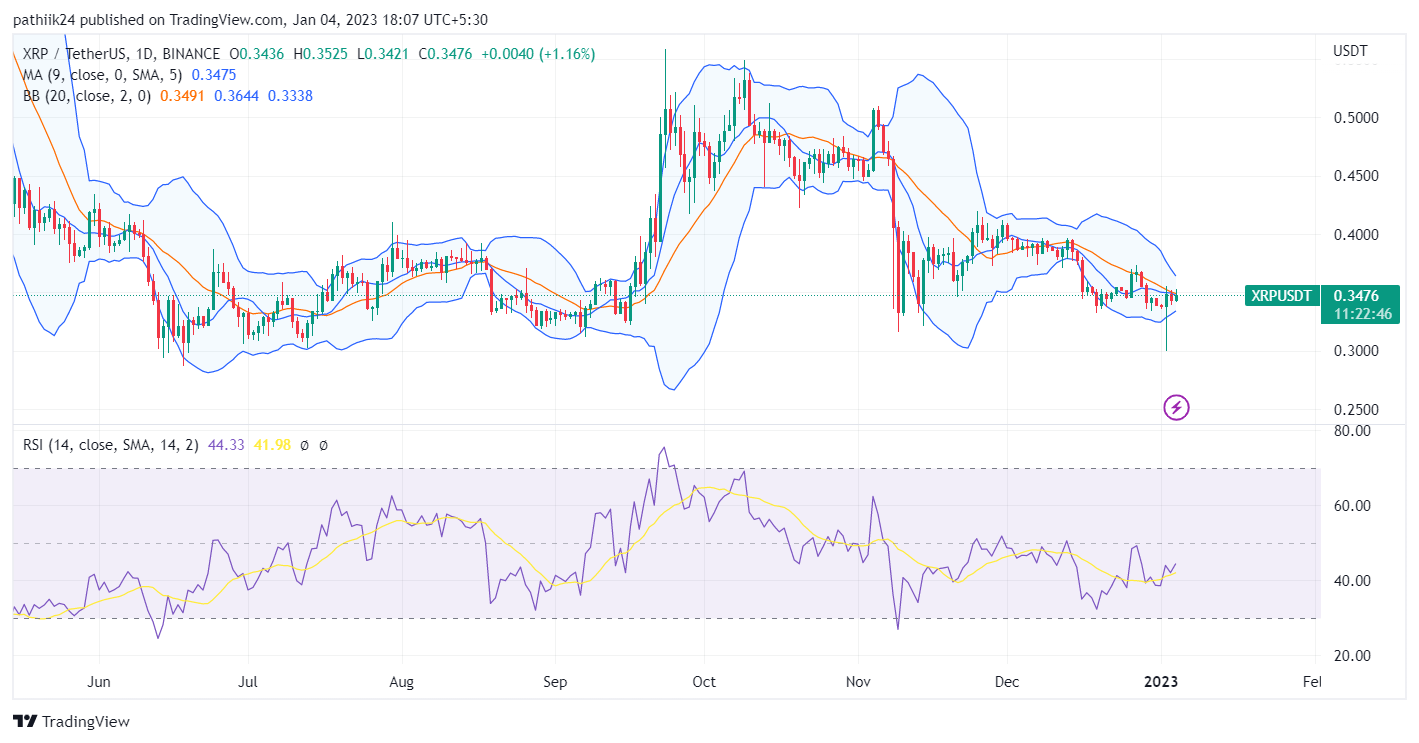 The 4-hour Ripple price analysis indicates that the XRP currency value has increased significantly, reaching $0.3513. The weekly study also favours bulls, indicating that purchasers have dominated the market, allowing the cryptocurrency to slowly increase. Today's instance was similar, but much more overpowering, as the Moving Average (MA) increased to $0.340.

Future trends may be favourable to purchasers as volatility rises in the candlestick chart. Meanwhile, the Bollinger bands have the following values: the upper value is at $0.3507, while the lower value is at $0.33099. In the 4-hour chart, the RSI score is 53.95, which may rise more in the future depending on the circumstances. 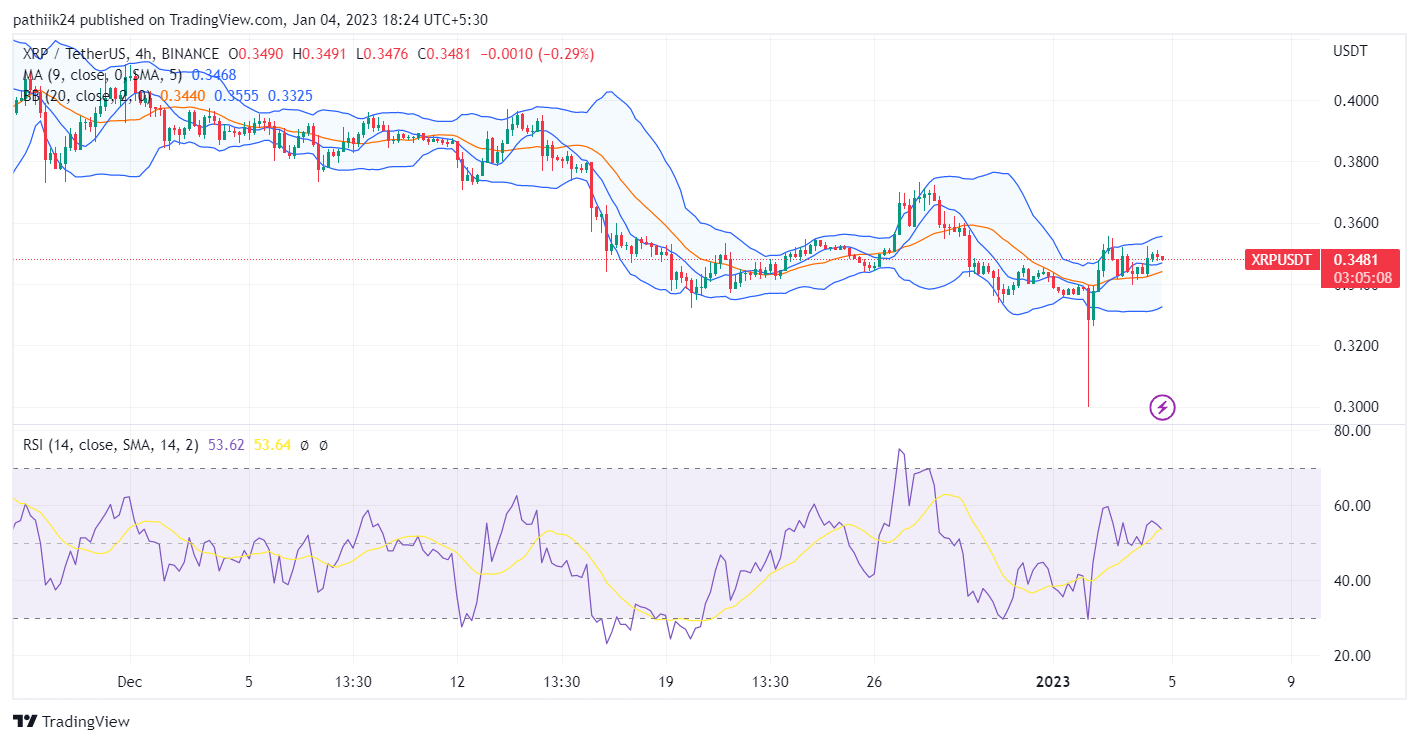 Whales on the $XRP Ledger have been exchanging a substantial quantity of tokens in recent days after swiftly amassing a major portion of the cryptocurrency's supply over the previous five weeks.

Both wallets are unnamed on the XRP Ledger explorer Bithomp, and with their inclusion, $XRP whales have been found to transfer more than $74 million in cryptocurrency in just a few days, shortly after 500 million tokens were released from escrow.

According to CryptoGlobe, whale addresses on the $XRP Ledger owning between 100,000 and 10 million tokens have quickly expanded their holdings over the previous five weeks, increasing from 16.7% to 18.3% of the cryptocurrency's supply.

$XRP whales began adding to their holdings around the end of September and early October when the cryptocurrency's price began to rise as both the US Securities and Exchange Commission (SEC) and Ripple Labs sought to settle their legal dispute.

Can ripples survive without XRP?

It does not require XRP to operate. RippleNet is a blockchain designed for financial organizations that may be used to settle transactions such as remittance payments as well as exchange currencies. Ripple's partners include large institutions like as Bank of America, a member of the FDIC, and over 55 nations have agreed to adopt it.

Is Ripple cryptocurrency a good investment?

Financial institutions and investors have come to trust XRP, which may make it a more dependable and steady investment than some other alt-coins. Furthermore, unlike some other cryptocurrencies where tokens are continuously minted and mined, XRP has a limited supply of coins.

Will banks use XRP?

RippleNet has incorporated a lot of foreign banks. Any bank that joins the network has access to a number of other banks for trading. As a result, XRP provides participating banks' clients with access to the market.

Is Ripple better than Bitcoin?

Transactions using XRP are quicker and less expensive than those using Bitcoin. Bitcoin may be time-consuming since it needs computers to tackle challenging cryptographic challenges. On the other side, XRP transactions are processed and confirmed in a matter of seconds. As a result, the XRP blockchain can support more users than the Bitcoin network.

Is Ripple a real cryptocurrency?

The organisation that created the cryptocurrency XRP is called Ripple. While XRP transactions are verified in seconds at a low cost, Bitcoin transaction confirmations can take several minutes and incur hefty transaction charges. The technology called XRP is well recognised for its digital payment network and protocol.